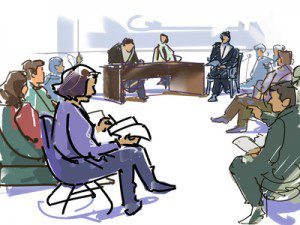 Last Thursday, I attended a fascinating panel discussion on “Writing about Religion in an Age of Polarization” at Boston College. During the talk, one panelist, New York Times religion columnist Mark Oppenheimer, offhandedly claimed that theology isn’t important. His reasoning? America is an experiment in theology not mattering – in getting along despite our private differences in faith. But what Oppenheimer didn’t reckon with is that everyone has a theology – a root idea of what they think the world is and why we’re here. These ideas profoundly influence the way we live our lives and the choices we make. This is why I’m pretty sure theology actually matters. And if we had intelligent, public theological discourse, it could make us more aware of our unspoken motivations and values – and less susceptible to the lousy theological reasoning (“God loves America, so we can wage holy war against our enemies!”) that permeates American public culture.

Sure, President Obama has cited Niebuhr as among his most important influences, James Cone still teaches theology, and MLK’s legacy surrounds us (although his theological vocation is mostly ignored). But in general, the role of the public theologian has dwindled to almost nothing since mid-century. Theology, as a public matter of discussion, is dead.

And maybe this isn’t a problem, right? Mark Oppenheimer has written that most people are “not theological; they’re not learned or even interested in the core teachings of their tradition.” Most folks have zero interest in the fine points of theological discourse. They just want to get ahead in life and avoid hardship. Debates about, say, God’s immanence versus God’s transcendence make their eyes glaze over. Thus, Oppenheimer concludes, we can’t expect theology to be a major topic of national conversation – and we don’t need to mourn the disappearance of public theologians.

But the thing is, everyone has a theology. Everyone has some basic assumptions – even if vague, half-formed, and inchoate – about what the world is all about and why we’re here. (This includes atheists – who actually tend to be more intentional and articulate about their theological beliefs than average, because they’ve given them serious thought.) In turn, our basic beliefs about the nature of the world trickle up and influence our daily choices, and even our political beliefs. Ergo: anyone who thinks that theology doesn’t matter is denying how people work (and ignoring practically all of political history).

But I can see how a smart, sophisticated guy like Oppenheimer could believe that rampant theological ignorance is a non-issue. Such an idea is a natural outgrowth of several completely erroneous assumptions that are common among today’s intelligentsia.

One them is excessive materialism. As you can see if you watch the video of the Boston College panel, Oppenheimer thinks that people don’t care what church they go to – nor what its theology is – as long as the church is politically and economically convenient to attend. (Is it nearby? Will it increase my social standing to attend its services?) For him, most people are motivated above all by material and practical concerns. They’re simply too crass for deep theological questions.

This is a misreading of human nature. Material drives simply can’t explain everything about human life – no matter how earnestly arm-waving neoliberal economists insist otherwise. If material concerns were all that mattered in life, then residents of wealthy countries wouldn’t commit suicide by the millions each year. Rich executives wouldn’t flock to yoga retreats and meditation centers. And religion wouldn’t be one of the single most powerful drivers of American political discourse.

No, the big questions – “What’s the point of life?” “What’s really true?” “What’s the best way to live life?” – really matter. Even for crass, uneducated people. We do not live by bread alone.

And theology, for all its flaws, at least tries to tackle the big questions. It offers more than bread. Every time a person shows up in a church or temple, she’s getting exposed to somebody’s answers to the big questions. And by definition, these tend to be theological answers. If that visitor likes what she hears, she might keep coming back. So the idea that people pick a church based solely on how conveniently it’s located or whether the congregation is socially prominent is far-fetched. People also choose churches based on the theology preached from the pulpit – on the church’s answers to the big questions.

Second, Oppenheimer’s view is ahistorical. Painfully so. Throughout American history, countless pioneers, pilgrims, homesteaders, and suburbanites have been profoundly informed by religious doctrines. Calvinism, especially, with its abundant allusions to divine providence and God’s absolute control over earthly affairs, has deeply shaped America’s self-concept. For example, Calvinist theology helped inspire the doctrine of Manifest Destiny – which, in its brute impact on the globe’s boundaries, is surely one of the most influential (for good or ill) national doctrines of all time.

How theological was Manifest Destiny? In articulating the growing belief that America was destined to conquer the continent and dominate the globe, one senator grandiosely argued that God

has given us the spirit of progress to overwhelm the forces of reaction throughout the earth. He has made us adept at government that we may administer government among savage and senile peoples. Were it not for such a force as this the world would relapse into barbarism and night. And of all our race he has marked the American people as his chosen nation to finally lead in the redemption of the world.

There you have it. America’s self-identity has – since the beginning – centered on Calvinistic ideas about God’s special plan and destiny for the new nation. Ignore Calvin, and you’ll completely fail to understand just about everything that has happened in North America since, oh, 1620.

(It’s not just America, either. Expecting someone who’s theologically ignorant of dharma and karma to understand the culture of India – especially the caste system – is like demanding that a badger translate the instruction manual for a 1997 Toyota Corolla. Zoom a few thousand miles northeast, and you’ll find that hierarchical, tradition-bound South Korea is similarly impenetrable if you know nothing of Confucianism or Buddhism – including their teachings about the good life and the nature of reality.)

Finally, Oppenheimer has a misplaced faith in what the French call laïcité – the radical separation of public culture from religion. In his comments at Boston College, Oppenheimer argued that, because American culture downplays private theological beliefs in the public realm, we ought to all get along on the basis of politeness, courtesy, and shared interest in a functioning market. Religion, in short, is for the hearth and home. Outdoors, in the public square, we’re not Christians or Muslims – we’re autonomous transactors on the value-free marketplace.

But this is pure idealism. In the same way that people can be economically modeled as rational self-interested actors, but plainly are not, we can all be described as perfect secularists who are capable of detaching our deepest theological beliefs from our everyday choices and actions – but we plainly do not. Our foundational beliefs follow us into every situation we enter. To pretend we can ignore them is to engage in blatant self-deception.

See, the thing about theology is that, as Paul Tillich put it, it’s ultimate – people’s religious beliefs comprise, by and large, their most important values. This is why religious affiliation and attendance habits are two of the most important predictors of people’s values, lifestyles, and voting patterns.

Modern atheism is a good example of the intimate relationship between worldview and values. Many atheists see the world as a material place in which we have to articulate our own values, to forge meaning for ourselves using enlightened institutions and intelligent inquiry. Tradition, for most atheists, is more of a hindrance than a boon, since traditional societies typically downplay the individual’s rights and offer far-fetched answers to the question of life’s purpose. Better to trust our own intelligence, and use our wits to construct new values that actually work for people.

If you think about it for a minute, you quickly realize that such an outlook logically implies a whole cluster of distinctive attitudes toward social, political, and economic questions – attitudes that are different from those of devout Christians or Jews. These differences in attitude play out in the voting booth, in consumer choices, in charitable donations, in pastimes and hobbies – in short, everywhere. Whether we’re nominal Christians or atheists, committed Hindus or Jewish agnostics, our beliefs about the nature of reality overflow into how we think society should be constructed, what a moral life looks like, and how we should treat each other.

So theology matters. And more importantly, theological debate – theological conflict – is already everywhere, all around us. We’re just not calling it theology. And we don’t have any experts to guide us. A return of articulate, impassioned public theology would allow us all to drag our theological agendas into the daylight, and to fight about them honorably where everyone can see. This, in turn, could increase the quality of people’s thinking about the big questions, and prevent us from falling so easily victim to bad theology masquerading as self-serving common sense.

What if a skilled, widely respected public theologian had stood up and told George W. Bush, in no uncertain terms, that it was theologically absurd to argue that God willed for America to invade Iraq? What if American culture had been capable of challenging the neoconservative movement on theological grounds, where its members lived and breathed?

I’m not arguing that theology is a cure-all. Clearly, theology has been used to support very nasty things in American history. And intelligent public theology probably wouldn’t have changed George Bush’s mind. But it might have made the national soil less fertile for his theological naïveté.

We all have deeply theological commitments and agendas, and these competing agendas are roiling madly beneath the surface of American life. Currently, we’re unable to even articulate how profoundly Calvinism is different from prosperity-gospel theology, which is different from Catholic natural law theology, which is different from atheistic materialist beliefs. But they are different. We really do have profound disagreements about the most basic, most important issues here. Better to haul them into the open, and relearn the language for debating them, than to let them keep violently festering in our national unconscious –  or driving our public policy from the shadows. Theology matters after all.

November 14, 2014 Want to understand religion? You've gotta have a body.
Recent Comments
0 | Leave a Comment
Browse Our Archives
get the latest from
Science On Religion
Sign up for our newsletter
POPULAR AT PATHEOS Public Square
1