Want to understand religion? You’ve gotta have a body. 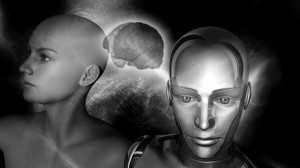 A few times a year, a group of scholars, scientists, and industry people gather in Manhattan as part of a Sinai and Synapses working group, and I’m privileged to be one of those folks. Last week, as part of a working group meeting, I and the other members of Sinai and Synapses were treated to a fascinating talk by an expert in religion and technology, Noreen Herzfeld. Herzfeld’s talk focused on bodies – on the difference between simulating cognition using abstract 0s or 1s and actually having fleshy, full-body experience of the world. I can’t think of a better angle from which to tackle questions of religion and science.

Herzfeld, a theologian and computer scientist, is an eloquent advocate of embodiment. Embodiment is a concept that has recently become quite fashionable in both religious studies and theology (which, by the way, as different fields get on about as well as hostile in-laws at a tipsy Thanksgiving). But while academic types usually use the word “fashionable” as a pejorative, this is one fashion I’m thrilled to get behind.

Embodiment refers to the idea that we humans have bodies, and that these bodies matter for how we behave and how we think. It may seem odd that such a blindingly obvious truism should get religion scholars all in a tizzy, but the fact is that most of Western culture has assumed that bodies are unimportant appendages to the mind since, well, Aristotle – who argued that the most exalted philosophy was completely disconnected from bodily or practical concerns, such as how to build a bridge or heal people. For Aristotle and most of the Western intellectual tradition since his time, bodily things have been associated with women, slaves, and the lowly. What really matters, what’s really important, are abstract, purely intellectual endeavors – unencumbered by the flesh.

This attitude – Yay intellect! Boo to bodies! – is alive and well in today’s supposedly enlightened culture, where it practically serves as the rallying motto for thousands of researchers and excitable pundits in the cognitive sciences, AI research, and the tech industries. In cognitive science and artificial intelligence research, for instance, symbolic or computational models of intelligence have typically dominated. These models assume that intelligence can be reduced to the pure algorithmic manipulation of abstract symbols, such as words and numbers. As the Stanford Encyclopedia of Philosophy puts it,

The last forty years have been dominated by the classical view that (at least higher) human cognition is analogous to symbolic computation in digital computers…information is represented by strings of symbols, just as we represent data in computer memory or on pieces of paper.

In this representation-based paradigm, intelligence doesn’t need a body at all in order to exist, but could be stored in a completely abstract space – such as the inside of a computer program. As Hilary Putnam put it, we could all be brains in vats!

Embodied cognition is one alternative to “the-brain-is-a-computer” models of intelligence. For embodied cognition theorists like neuroscientist Antonio Damasio, our mental processes fundamentally depend on physical processes and context. These claims are supported by experimental research that shows, for example, that it’s harder to recognize negative words when the facial muscles responsible for smiles are engaged (and more difficult to recognize positive words when we’re frowning). Damasio argues that emotional bodily states are fundamental ingredients of decision-making, and therefore central to the structure of intelligence. (His insights draw on philosopher and psychologist William James, who famously argued that changing our bodily postures – standing up straight, for example –affects our cognition.)

Embodied cognition models insist that what goes on in our muscles, our guts, and on the surface of our skin actually matters for our thinking. And the evidence is increasingly behind them. A brain in a vat would lack physical sensations. This means, for example, that it wouldn’t be able to feel fear – because fear is the tensing of the stomach muscles, the dilating of pupils, the flushing of the skin. If you’re not feeling physically tense, you’re not feeling afraid. Emotion, then, isn’t just a symbol. It’s an experience. And because emotion is absolutely indispensable to human information processing, it’s not clear that we could even call a brain in a vat “intelligent” at all, no matter how many neurons it had. This is why AI researcher and roboticist Rodney Brooks argues that only robots with fully-functional bodies could ever be intelligent: because bodies are what it takes to be conscious.

To return to Sinai and Synapses: while AI research and even cognitive science are slowly moving beyond the mind-as-computer model, our popular culture and tech worlds are stuck on it. Excitable screeds about how someday human minds will be uploaded to the Internet are published seemingly every week, even as we outsource more and more of our behavior and decisions to machines that actually are algorithm-based computational machines. Meanwhile, tech culture goofily celebrates every new gadget that transforms what used to be a complex, full-body decision into gleaming algorithmic logic.

You could call this tech-enthusiasm fundamentally a repudiation of context. Your physical and social surroundings are crucial for embodied cognition, but you can utterly ignore all that stuff if you just want to work with atomized bits of code. The fawning over abstract and the disembodied problem-solving that has characterized Western intellectual culture since Athens is actually a sort of disdain for real context. This is something to be wary of, according to Noreen Herzfeld. Technology is profoundly helpful, but without careful attention to the complexity of embodied experience, we’re in danger of over-streamlining our collective decision-making processes.

A splendidly written recent article in the New York Times Magazine offers a perfect example of why embodied learning is necessary. The process by which taxi drivers in London learn the entirety of the London street grid and all its landmarks through actually traveling the streets is so intense that their hippocampi grow to be bigger than other people’s. The ordeal is called gaining “the Knowledge.” And as GPS systems and other automatized, algorithm-based tools for navigating a city as cumbersome as London proliferate, cab drivers who have attained the Knowledge are showing why first-person, embodied knowledge is so important: they can actually maintain and synthesize more information that is relevant to particular scenarios. You want to get from Piccadilly to an obscure pub in the East End without hitting any traffic lights, and avoiding rush-hour traffic? GPS can’t help you there. But London cabbies can. They use their gut knowledge of the entirety of the city to quantifiably outperform GPS systems in real-life situations.

And of course, embodiment is crucial for understanding religion, which often makes no sense to people who only know it as a series of symbolic propositions. As Patton Dodd wrote recently for On Faith,

Patton’s observation is similar to one I heard recently from a much different source, Jay Feierman of the University of New Mexico. I saw Jay present a paper at the Society for the Scientific Study of Religion conference in Indianapolis, in which he described how the bowing and submissive bodily postures found in nearly all religions actually stimulate dopamine release – providing for intrinsic emotional rewards. Jay calls himself a committed atheist, but his third-person description of what goes on when human bodies do religious things is a useful complement to Patton’s first-person confession of embodied faith. Both agree that religious experience is something that comes from what bodies do. Noreen Herzfeld agrees, and so do I. And that goes for a tremendous amount of human life besides. If you want to understand religion, or culture, or London, you need to understand humans. And if you want to understand humans, you need to understand bodies. Our increasingly disembodied, tech-driven lives aren’t making that any easier.

December 4, 2014 A new theory for why Buddhist meditation makes us feel good
Recent Comments
0 | Leave a Comment
"Seems like contemporary culture is attempting a bold experiment: let's hope that individuals will arrive ..."
connorwood Why Rites of Passage Are Painful
"What is the replacement on hand? This question is from a father of two teenage ..."
Kripa Why Rites of Passage Are Painful
"I think with hindsight we have to say that Trump enabled Putin's invasion of Ukraine ..."
Barros Serrano So Long, Pax Americana
"Connor, have you perused the Biologos website yet? Biologos is an organization largely of evangelical ..."
Heather G Mashal Faith and the Evolutionary Predicament
Browse Our Archives
Related posts from Science On Religion