A new theory for why Buddhist meditation makes us feel good 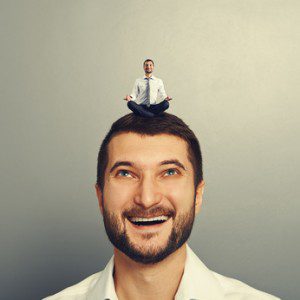 Booze. Cigarettes. Gambling. The human brain is vulnerable to all sorts of addictions. And thinking might be one of them. That’s right – in many Buddhist texts, the endless stream of rumination that runs through the mind of the average person isn’t merely a distracting habit, but a genuine addiction that befuddles the intellect and inhibits spiritual development. In a new article, a leading neuropsychologist makes the same claim – that we’re all addicted to daydreaming, and that the neurology of our addictions is the same as that of addiction to drugs. What’s more, certain forms of Buddhist meditation may release the brain’s chemical hold on itself, releasing us from our addictive daydreams.

The article, published this fall in Religion, Brain & Behavior, outlines a novel model for how meditation works. As such, it doesn’t present any new empirical research, and only reviews prior studies. But its author, Bowling Green State University psychologist Patricia Sharp, is deeply read in the neurophysiology of reward, addiction, and meditation, and her synthesis of material across related disciplines is both rich and compelling.

Sharp’s argument hinges on the claim that, as Buddhist scriptures teach, life’s rewards tend to lose their sweetness over time. For example, people who get rich tend to enjoy a quick spike in happiness – but that spike doesn’t last very long. Pretty soon, their happiness levels tend to return back to where they were. Their new riches don’t make them any happier than they were before. Thus, the pleasures of the world are inherently, well…disappointing.

What’s innovative is Sharp’s claim that thought itself – particularly the ruminative, daydreaming style of thought that consumes nearly half our waking hours – fits this same pattern. Each individual daydream might offer a little internal reward, such as when we fantasize about accepting a trophy or scoring a date with the office bombshell. But over time, the constant barrage of imagined experiences begins to lose its luster, to become unrewarding – and maybe even to inhibit our ability to feel pleasure in general.

Sharp doesn’t mention the First Noble Truth of Buddhism in her paper, but she’s referring to something pretty close to what it calls dukkha, or suffering – the fundamental unsatisfactoriness of life. Dukkha means that all the things we crave and become attached to can’t actually deliver on their glorious promises. Whether it’s rich food, sex, alcohol, wealth, or mere fantasies, the objects of our cravings always leave us feeling dissatisfied after we attain them.

Offering a neurobiological description of this basic unsatisfactoriness, Sharp points out that the nucleus accumbens – a part of the brain that plays a central role in reward and motivation – receives dopamine inputs from other regions such as the ventral tegmental area and the medial substantia nigra. Together, these regions form a circuit that enables reward-based learning, or conditioned responses. Think Pavlov: train a dog to understand that the sound of a bell is always followed by dinner, and pretty soon the dog learns to salivate when he hears the ringing. Inside his brain, dopamine projections into the nucleus accumbens (yes, dogs have them too) have learned to fire in in response to the predicted reward. The dog literally gets a little burst of happy chemicals when he hears the bell, because the conditioned responses have worn grooves into his reward circuitry.

The problem? “Overlearning.” If you fire the same circuits often enough, their reward value starts to decline. The job of the nucleus accumbens, in this model, is to reinforce adaptive associations between stimuli and behavior. Dopamine in the nucleus accumbens may serve as a “biochemical stamp” that marks connections between stimuli and behavioral responses. Once the right pattern has been established, the brain doesn’t necessarily need that dopamine signal anymore – the pathway is already there. So the reward signals fade away, suppressed by inhibitor cells that project from the nucleus accumbens back into the midbrain, where they down-regulate dopamine release. The reward pathway is still there, entrenched in the brain through a network of strong, habit-worn connections. But the reward itself – dopamine – is gone. This process may explain the “hedonic treadmill” effect so unpleasantly familiar to us all, in which initially pleasurable or exciting stimuli lose their appeal over time.

One particularly nasty result of this hedonic treadmill effect can be compulsive, addictive behavior. Think about a rat obsessively pulling a lever to deliver cocaine – or a glassy-eyed casino-goer stuffing quarters into a slot machine. These compulsive behaviors arise from long-established reward pathways, now devoid of dopamine but still connective and active. Sharp argues that both chemical addiction and simple habituation to everyday rewards result from this gradual down-regulation of dopamine projections to the nucleus accumbens.

What’s more, our habitual fantasies and daydreams may follow the same pattern. Each time our minds wander, we start to fantasize, plan, and construct imaginative scenarios. Many of these imaginative scenarios come with their own little pulses of reward, as the hippocampus and other limbic regions carry excitable signals into the accumbens. Over time, our brains crystallize patterns of thought that repeat the same types of thoughts and daydreams over and over. Initially, these crystallizations were motivated by dopamine flushes in the reward system. But eventually, the dopamine rewards taper off – even though the thought patterns are still there. We’re left with a compulsive, clinging re-running of the same old thoughts, a repeating of the same mental scenarios obsessively. Worse, the holistic effect may be a general drop-off in happiness, because we’re indulging in lots of mental activity that offers no rewards. Our daydreams may be literally inhibiting pleasure. In Sharp’s words,

our constant engagement in compulsive, repetitive thought patterns tends to cause an ongoing, powerfully conditioned decrease in dopamine release, so that dopamine is chronically below what would be expected in the absence of these ongoing mental patterns.

The solution? Meditation! In particular, Buddhist samatha, or shamatta, meditation entails intense mental absorption and the cessation of thoughts. Sharp suggests that such meditative states, while difficult to achieve, may serve to break up established patterns of connectivity within the brain. These patterns, or “attractor networks,” are sort of like long-established wrinkles in your favorite shirt. You might put the shirt through the wash, but if you leave the shirt draped carelessly over a chair…well, the same crease shows back up again. Likewise, our habitual patterns of neural connectivity – in which the same clusters of neurons are activated synchronously – are always waiting to reappear.

In contrast, previous research has shown that intense meditative states synchronize activity across networks in the brain. These whole-brain patterns of synchronization are structurally similar to certain epileptic seizure states, in which normal, localized patterns of connectivity are suppressed and global synchrony takes over instead. These epileptic states, Sharp suggests, flood the brain with acetylcholine, a neurotransmitter that can boost signal connections between cells from widely separated regions in the brain. In an acetylcholine-soaked brain, established knots of habit-bound connectivity may be temporarily relaxed, replaced with more general, dynamic connectivity across the entire cortex.

The overall effect of samatha meditation, then, may be what Sharp calls a “general loosening of the existent attractor networks in the brain.” Importantly, this loosening may be exactly what we need in order to experience bliss. Attractor networks in the brain are tight knots of connections. When the nucleus accumbens is activated by a long-established circuit, it sends signals back to the midbrain to inhibit dopamine production. Thus, when long-established knots of connection are suppressed, these inhibitory signals go silent. The dopamine can start pumping again. And we start to feel good. This, Sharp suggests, is how meditation works its magic: by releasing our brains’ constrictive holds on our reward systems, and allowing the normal flow of dopamine to start up once more.

Sharp’s model is speculative and theoretical. It appears in print alongside with a half-dozen response commentaries from experts, many of which are critical. It doesn’t offer any new empirical data. But it’s fascinating. And it suggests exciting new possibilities for research, and for thinking about how the brain works. Nowhere else has the time-honored Buddhist claim that our daily obsessive thoughts and mind-wandering are actual addictions been so forcefully presented in modern biological terms. Sometimes, speculative science is the most interesting – and the most groundbreaking.

Now for a confession: recently, I’ve nursed curmudgeonly concerns about our growing American enthusiasm for Buddhism and “mindfulness” training. I’m nervous that claiming Buddhist identity has become a marker of upper-middle class bourgeois sensibility, set against the hopelessly uncool Christianity or Judaism of the establishment. (Bizarrely, the bourgeoisie in the United States suffers from the chronic, and dangerous, delusion that it is somehow not the establishment – as evidenced by how canny companies sell their goods by showing off how countercultural and rebellious they are.) And I’m wary of the assumption that all mind-wandering is necessarily bad. We don’t all need to be “mindful” all the time. In fact, as recent research has shown, lack of daydreaming can even hurt us.

So Buddhism may be a little trendy these days, and our conversations about mindfulness could use more depth. But just because something is trendy doesn’t mean it’s bad. Buddhism has produced some of the most powerful psychology the world has ever seen, and its practices and insights are, frankly, invaluable. Sharp’s fascinating model gives us another useful insight into why.

November 14, 2014
Want to understand religion? You've gotta have a body.
Next Post