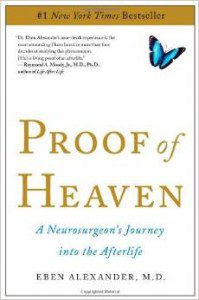 Bad news: we’re all going to die. The question is, what comes afterward? In the book Proof of Heaven, former neurosurgeon Eben Alexander uses his own profound near-death experience to claim we live on in a spiritual realm. Featured on Oprah and countless other television and radio shows, Alexander has become prince of a media fiefdom whose currency is life after death. His book, along with its sequel The Map of Heaven, is the subject of this month’s Patheos book club, and I’ve been asked to weigh in. So what’s the deal with Proof of Heaven? Is it what it claims to be?

In light of recent revelations that bestselling child author Alex Malarkey invented his own near-death experience (NDE), we have good reason to feel gun-shy. Nobody wants to get cruelly duped about the existence of a glorious afterlife. Of course, this is exactly what an acclaimed 2013 Esquire story claims Eben Alexander has done – something we’ll return to in a moment.

But first, let’s examine Alexander’s book. In his easy-to-read, large-type memoir Proof of Heaven, he recounts that in 2008, an unusual case of bacterial meningitis quickly sent him into a coma. During the next seven days, his cerebral activity was supposedly nil. But while his brain was flatlining, Alexander’s soul was exploring a fantastical otherworld of impossible beauty and grace, he claims, in which the secrets of the universe were revealed to him – including that God loves everyone unconditionally, and that life’s difficulties teach us tough but vital spiritual lessons. He met family members and saw friends. Alexander made a statistically improbable recovery from his illness, awakening just after the doctors decided to suspend treatment.

The book’s claims are extraordinary. Alexander, an adoptee, says he was guided by a young woman during his NDE who he later learned resembled a long-dead biological sister he’d never met. He saw the faces of people who loved him. He also insists that he – a nonbeliever – deliriously called out loudly to God in the ER, and that a fantastical rainbow above the hospital heralded his reawakening from his coma. Throughout the book, he leverages his neurosurgeon’s authority to stress that his meningitis-ravaged brain was totally inactive during his coma, so his NDE couldn’t have been random neural firing.

Cue the skeptics. In Luke Dittrich’s December 2013 exposé of Alexander in Esquire, one of Alexander’s doctors, Laura Potter, states point-blank that Alexander could never have cried out to God in the emergency room, because he was already intubated. (You try talking with a windpipe full of breathing tube.) A meteorologist reports that the skies were clear the morning Alexander awoke from his coma, making a rainbow… improbable at best. Worst, Alexander’s coma was was induced by Dr. Potter herself in order to prevent injuries from seizure:

There is no indication in (Alexander’s) book that it was Laura Potter, and not bacterial meningitis, that induced his coma.

How blacked-out could Alexander have been if he needed drugs to stay unconscious? Alexander’s story begins to seem less like a medical miracle and more like a pack of hopped-up exaggerations. According to Dittrich, even the Dalai Lama is skeptical, admonishing Alexander that lying for self-gain is bad:

He wags a finger in Alexander’s direction. When a man makes extraordinary claims, a “thorough investigation” is required, to ensure “that person reliable, never telling lie,” and has “no reason to lie.”

Oof. If the Dalai Lama himself is hinting you’re a liar, you have a PR problem.

But hold up. Dittrich’s story may not be quite as honest as it seems, either. Alexander’s mother and sister have insisted to a pro-NDE researcher that they did see a rainbow the morning he awoke (with time-stamped emails as evidence, they say), while Alexander’s wife and family pastor steadfastly claim that Alexander did, in fact, call out to God in the ER – before he was intubated. A bare-bones statement from attending physician Scott Wade at the end of Proof of Heaven supports the extremity of Alexander’s illness and coma, from which he was expected to die. And Dr. Potter, Dittrich’s star witness, apparently issued a harsh retraction of the Esquire story:

I am saddened by and gravely disappointed by the article recently published in Esquire. The content attributed to me is both out of context and does not accurately portray the events around Dr. Eben Alexander’s hospitalization. …I believe Dr. Alexander has made every attempt to be factual in his accounting of events.*

The above challenges to Dittrich are mostly from pro-paranormal sources (aside from Dr. Wade’s statement), so maybe we can ignore them. But what really digs at Dittrich’s honesty is that, in his lecture, the Dalai Lama actually stated that Alexander had “no reason to tell lie (sic).” Watch the video from around 44:00 – in context, His Holiness’s quote means almost the direct opposite of what Dittrich implied it meant. Dittrich’s unsettling quote-mining weakens his overall case and implies that this author clearly has his own bias.

Still, Dittrich points out genuinely troubling issues with Alexander’s account – particularly that, in the past, Alexander has lied to surgery patients and tampered with records to conceal mistakes. Alexander has been sued for malpractice and been terminated from several staff surgeon positions. In Proof of Heaven, Alexander somehow omits these failings, casting himself as an esteemed neurosurgeon with impeccable scientific and professional credentials. This selective recall casts a heavy shadow on his credibility.

The upshot? Both Alexander and Dittrich are guilty of spin and selective narration, which highlights how irksomely difficult it is to get impartial insight into things like NDEs. But the thing is, NDEs are real – in the sense that people really have them. They’ve been historically documented all over the world, from Plato’s Greece to modern China. A modern New Age spirituality has sprung up around them, and Alexander’s story fits right into its tropes – from reincarnation to a hoped-for synthesis of religion and science.

So what to do? How about this – instead of going back and forth, tiresomely, between true believers in NDEs and skeptic debunkers, let’s take NDEs seriously as human phenomena. This can help us understand why stories like Eben Alexander’s grip us so profoundly.

In Proof of Heaven, Alexander rhapsodizes that, from his NDE, he learned that biological life is “defensiveness, whereas spiritual life is just the opposite.” Just consider this statement at face value. Whatever their physiology, NDEs reflect our personal experiences at the existential edges of a challenging and difficult world. A common feature of near-death accounts is actually relief at being dead – the cessation of all the aches, pains, and emotional trauma that we suffer every minute we’re alive.

One fascinating book, by sociologist Allan Kellehear, takes this personal import of NDEs seriously while putting aside the question of what causes them. Kellehear fruitfully points out the similarities between near-death experiences and rites of initiation or social transition. During tribal initiation rituals, Kellehear writes, young people are removed from the everyday arena of life – characterized, as Alexander puts it, by “defensiveness,” or the struggle for physical survival and status – and given a kind of “time out” in which their former identities are set aside. During the period of initiation, old responsibilities and roles are paused, allowing the initiates to reflect on the social order – to step outside life’s play and observe its characters from the outside. Ultimately, initiation rites are about the initiate’s changing relationships: with her tribe, with her family and friends.

Relationships dominate near-death experiences. While skeptics and debunkers focus on the physical causes of phenomena like the dark tunnel, actual accounts of NDEs overwhelmingly focus on loved ones and close others – grandparents who greet the newly dead grandson, reunions with spouses or parents. Hindus in India who return from death don’t report seeing a tunnel at all, but instead are often greeted by Yama, the god of death. Native Hawaiians descend into volcanos when they have NDEs. But both Hindus and Hawaiians are given news of or greeted by their friends and family. Around the world, people meet their loved ones in the afterlife, just as Alexander’s story revolves around his birth family and the faces he encounters.

There is something happening here. Here we are, fragile biological beings, pushed to our absolute limits by the experience of death. We’ve spent our whole lives striving, struggling. And what do our minds conjure up just as the brain shuts down at last? The people we love. Our families. Our spouses and children. Our long-lost friends. Not our graduate degrees or cars.

If this doesn’t say something touching about human beings, I don’t know what does. Alexander writes that his NDE proves we are loved. He says this love comes from God. But even if you’re an atheist, part of this message holds true. At our final moments, pushed beyond our lifelong struggles and roles, our minds orient like a compass needle to the relationships that have carried us through our lives. We are loved.

Eben Alexander is a showman. Luke Dittrich’s article calls him out on that. What Alexander is selling is something people want to buy – a taste of the afterlife, a reassurance that life continues. I’d feel better about Alexander’s story if he came clean about his professional history and, as Dittrich calls for, made his medical records public. But consider the implicit message of Proof of Heaven. If people took it seriously, magazines like Esquire – dedicated to materialism, to making people feel insecure so they’ll buy stuff, to objectifying other people – would flop, permanently. Dittrich would be out of a job.

Meanwhile, skeptical debunkers of NDEs are missing the point. It may very well be that we’ll eventually find physiological correlates for consciousness during the final stages of dying. But this doesn’t mean we should disregard NDEs any more than knowing how the props work means we should walk out of a play. The point of the play is the story, not the backstage mechanics. And in the case of NDEs, the story is about how we love one another, how our minds at their most extreme moments fall into reconciliation with the people who mattered to us. That’s heaven. If it takes a showman like Alexander to bring us to that play, it could be worth the admission.

* This quote was apparently released by Dr. Potter to a news agency that then declined to use it, but the original source is obscure. All the pro-NDE sites repeat it to each other. If anyone finds an original source, or finds that it’s fabricated, let me know.

January 7, 2015
How separate are science and religion, anyway?
Next Post

February 2, 2015 America's public ritual gone terribly wrong
Recent Comments
0 | Leave a Comment
Browse Our Archives
get the latest from
Science On Religion
Sign up for our newsletter
POPULAR AT PATHEOS Public Square
1