How separate are science and religion, anyway?

How separate are science and religion, anyway? January 7, 2015 Connor Wood 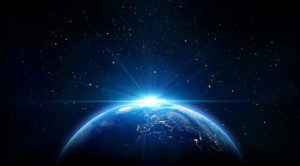 Over Christmas, the author Eric Metaxas wrote a much-ballyhooed article for the Wall Street Journal, in which he argued that the improbability of life on Earth constitutes a scientific case for God. According to Metaxas, the odds against all the necessary parameters – right type of star, right size planet, deflected comets – are so astronomical (pun intended) that the very existence of life is a clear sign that God monkeyed with the physics. I think this is a less-than-convincing case. I also think it’s the kind of theology that gets religion in serious trouble. My friend Geoff Mitelman, a rabbi, agrees, arguing that “religion isn’t science.” But does this mean that religion doesn’t – or can’t – make any claims about the world, or that religious beliefs are never constrained by science?

This is probably the most complicated question in the history of ever, so grab the guardrails. Metaxas’s claim – that Earth’s improbable uniqueness and our failure to discover extraterrestrial life make a case for God – is a lumbering, reawakened version of 18th- and 19th-century “natural theology.” Natural theology was – is – an attempt to draw conclusions about God from the study of nature. Its most famous proponent was English theologian William Paley, who claimed that if you stumbled across a complex object like a watch on the beach, your best inference would be that somebody designed it. Paley thought that the physical universe was something like that watch: intricate, complex, and cleverly designed.

The problem was that, as the 19th century advanced, so did science. As professionalized science showed that more and more phenomena were the result not of design, but of chance and natural law, Paley’s argument weakened considerably. Darwin’s theory of evolution by natural selection, in particular, was a serious challenge to any theology that explained the world’s order by crying “God did it!”

Today, many theologians and historians accuse Paley’s natural theology of inadvertently worsening the conflict between religion and science. By building the foundations of faith on what science couldn’t yet account for, natural theologians set up religion to fail.

Geoff Mitelman, founder of Sinai and Synapses, makes a similar argument in a piece in the Huffington Post, pointing out that “science is always changing.”  And so basing religious beliefs on current gaps in scientific knowledge is a sucker’s bet:

So what would happen if, say, we discover that the parameters for life are not quite as amazing as they seemed? Or if we discovered that humanity was not unique in the universe? If you were using science to support your religious outlook, unless you have a very sophisticated theology, you’d be in deep trouble.

Geoff also argues that science and religion are “two very different ways of thinking,” and that science’s focus on hypotheses and empirical testing has nothing to do with religion’s subjective search for meaning. This is similar to the late evolutionary biologist Stephen Jay Gould’s concept of “non-overlapping magisteria.” For Gould, religion had to do with values and meaning, while science had to do with objective facts and truth – and never the twain should overlap.

Gould’s motivation was noble. He saw that most people believed in God or an ultimate purpose for the world, and that science would be better served if that vast majority didn’t think that science was their enemy. This diplomatic sensibility was a far cry from today’s aggressive scientism, which tries to convince us that people can either have religious meaning or scientific truth, but not both. I agree with Gould that driving a ideological wedge between science and religion is a bad idea, for both political and practical reasons. And I agree with Geoff that old-school natural theology is a leaky raft.

But the idea that religion makes no concretely refutable claims about the world – that science’s bailiwick is empirical reality, while religion’s realm is the inner world of subjective meaning – is also dangerous, for different reasons. Liberal Protestant theology is a classic example of this error. Seeking to carve out a safe space for faith in a scientific age, 19th-century thinkers like Friedrich Schleiermacher suggested that theology should retreat from objective assertions and focus instead on inner religious feelings, which science couldn’t refute.

In this way, liberal theology effectively severed the cord between objective reality and religious faith. Wary of making any claims that might conflict with science, it often ended up making few claims at all. It’s no coincidence that liberal Protestant denominations have often had trouble showing that there’s anything at stake in their doctrines – possibly contributing to their demographic collapse. While natural theology ties the fortunes of religion too closely to transient scientific claims, liberal theology’s embrace of non-overlapping magisteria isolates religion from the actual world, threatening to render it irrelevant.

The upshot? When religion sections itself off from empirical reality in order to protect its valuable gifts – value, meaning, a sense of history – from scientific assault, it cedes the high ground from the outset. Like an amateur pickup player who heads for the showers when the semi-pros take the court, it has admitted that it cannot hang. This very admission contributes to its own growing sense of irrelevance.

But the fact is, even religious believers live in an objective world, in which some beliefs are more accurate than others. If you believe you can fly, a tumble from a window will disabuse you of that notion. Religion and science both deal with this same world, and their claims need to fit it without being contradicted. This means that, although Geoff is correct that “the question of God is not a scientific one,” the idea of God needs to fit the data of the world.

Many people don’t think it does. If God is all-benevolent, whence evil? If God is omniscient and omnipotent, why all the suffering in evolution? Throughout history, religious skeptics have cogently argued that the data of the world don’t fit the idea of God. In turn, apologists such as Keith Ward argue that the epistemic coherence of reality is consistent with the idea that something like “mind” lies at the foundation of things. In neither case is the question of God empirically neutral. Both skeptics and apologists alike bring the facts about reality – or interpretations of them – to bear on religious matters.*

How can religion keep a confident place on reality’s court without running awkwardly against the facts? The American sociologist Robert Bellah advocated for “symbolic realism.” He claimed that faith is “a system of symbols which is neither simply objective nor simply subjective,” but which bears on reality and is shaped by it. Similarly, religion-science scholar Ian Barbour argued that both science and religion depend on objective and subjective input, and are both constrained by facts in distinct yet parallel ways.

Skeptics might scoff, but most religious believers understand that some religious claims are truer than others, in light of the way they fit – or don’t – with the facts of existence. Recall the last time you read a novel with annoyingly wooden dialog, or saw a movie with choppy, unrealistic characters. When a fictional or metaphorical representation of the world is off, when it doesn’t fit the way things are, we notice. Some fictions are truer than others. And some religious representations, though not literal, may more keenly reflect how things are in the world than all the big data in Cambridge.

Metaxas’s thesis makes religion too literal, placing it squarely in science’s crosshairs. If we discover Martian microbes tomorrow, his case is shot. But he makes a worse error in assuming that literal truths are the only ones that matter. Metaphorical and figurative claims are not just poetic indulgences. They’re the basic stuff of language. And they’re not just subjective – they can be more or less accurate, depending on how well they evoke determinate aspects of reality. They’re constrained, as science is, by the facts.

This is why religious believers should hesitate to embrace Gould’s non-overlapping magisteria – or any claim that religion is purely subjective or existential. Its rich stores of metaphor, narrative, and ritual mean that religion has the tools to deal with facts as well as values. It shouldn’t be cordoned off from empirical questions, because protecting religion from the objective facts won’t keep it vital. In fact, if history is any judge, it’ll do just the opposite.

* This dynamic isn’t limited to Christianity. The Buddhist First Noble Truth that life is inherently unsatisfactory – dukkha – is an empirical claim as well as a personal one, for example. Billions of Buddhists throughout history have found it to be accurate, not merely in the subjective quest for value but – crucially – also as regards objective reality, where neurology cannot sustain permanent reward signals, where pain is a vital biological tool, and where no pleasure or happiness can endure.

Should the Southern Baptist Convention rename...
Religion Q & A
Related posts from Science On Religion