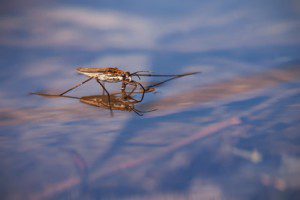 Welcome back! This is the third installation of my series on religion and group-level evolution. Last time, we left off with the raging debates between scientists who champion kin selection and those who swear by group selection. Group selection is the idea that cooperative behaviors – like caring for others’ offspring or loudly warning neighbors about predators – evolved by competition between groups. By contrast, kin selection, or inclusive fitness, insists that altruistic behaviors evolve strictly to benefit relatives. For example, when a mother babysits her sister’s child, she may seem generous and giving, but she’s actually being genetically selfish – peer through the illuminating lens of inclusive fitness theory, and you’ll find that she’s just caring for a little package of copies of her own genes.

Inclusive fitness models have dominated since the 1970s. However, in just the last few years, more scientists – including E.O. Wilson, the world’s most famous living biologist – have begun arguing for group selection instead. This has stirred up a fierce fight, rousing entire armies of opponents who passionately disagree with the very concept of group selection.

What’s their beef, specifically? First of all, they think it’s lousy science. In a 2012 essay at Edge.org, evolutionary psychologist Steven Pinker complained that group selection isn’t a scientific concept because groups, unlike individual animals, can’t literally replicate themselves. Evolution, Pinker argued, can only work when organisms reproduce themselves accurately – with fidelity – and different individuals contribute disproportionately to the next generation. For example, rabbits undergo evolution because they sexually reproduce themselves with high fidelity, such that each rabbit’s offspring shares many of its unique traits. Rabbits with adaptive traits leave more copies of their genes in population, so those traits tend to spread.

That’s how evolution works, Pinker sniffs. And groups aren’t rabbits. How, then, can groups compete in any evolutionarily meaningful way? Groups don’t prosper by replicating themselves, the way rabbits do. A successful rabbit is one that has lots of high-quality offspring, letting it leave behind beaucoup copies of its genes. And genes are discrete, countable things. They’re units. You can plug them into hard-nosed equations. But what’s the equivalent for groups? Groups don’t have “offspring.” Even when small splinter groups do shoot off from larger, parent groups, they almost never compete directly in a zero-sum way against other splinter groups. And they certainly don’t have any discrete, countable units of heritability, the equivalent of genes.

According to Pinker, the interactions between groups are structurally nothing like the interactions between organisms. The boundaries of groups are too diffuse, their behavior too unlike organisms for anything like selection to operate at their level. If groups competed against each other the way that rabbits do, what would be the criteria for success? More members? More territory? Neither of these things is truly analogous to genetic fitness.

Pinker’s critique is echoed by other opponents of group selection, from Richard Dawkins to Daniel Dennett. But this coterie of New Atheists/group-selection skeptics are close to being outright wrong. I say close to outright wrong because, if we accept their strict definitions of evolution  – if evolution only involves discrete entities replicating themselves with high fidelity – then they’re technically correct: group-level selection probably doesn’t happen. But not everybody agrees that this is the litmus test for evolution.

Take Joseph Henrich, at the University of British Columbia. In his evolution research, Henrich uses modeling techniques that don’t depend on discrete replicators, but instead focus on “continuous phenotypes” that vary along a continuum. For example, let’s say there are two possibilities for eye color: blue and brown. That’s a binary variation. It’s discrete. You’ve got either blue eyes or brown ones. By contrast, any random person could be four feet tall, seven-foot-fix, or anywhere in between. Height is a continuous phenotype, not a discrete one. Modeling techniques that focus on these kinds of continuous variables rather than on discrete numbers of genes or alleles have produced powerful results, predicting important evolutionary effects and offering explanations for phenomena we’ve observed – without relying on any discrete, countable units of variation.

So, contrary to Pinker-Dennet-Dawkins, we can rigorously model natural selection without relying on discrete replicators (like genes), and without assuming that the entities in question create high-fidelity copies of themselves.

This is exactly the sort of dynamic you’d expect to see in cultural evolution – the process by which cultural, rather than genetic, information selectively gets passed down to ensuing generations, or laterally from peer to peer. In cultural evolution, different groups of people certainly compete against each other, and there are clearly winners and losers. But success isn’t defined by how many unique copies of itself each group makes. Instead, who wins and who loses is a function of which cultural practices and traditions get passed along. In the words of cultural evolutionist Pete Richerson:

Polynesians who sailed canoes that were badly designed or built were less likely to have left offspring or imitators. Communities that had faulty institutions were more likely to have disbanded due to environmental deterioration, social collapse, or conquest by competing groups.

Over time, useful cultural practices spread, and detrimental ones tend to be abandoned. If your culture doesn’t have traditions and customs that create strong unity, it’ll suffer. Attrition – and, possibly, conquest – will take a toll on membership and your group’s vitality. Some members might even decide to start hanging out with another group across the valley, whose culture seems to be working better.

Joe Henrich argues that prestige is thus a key component of cultural evolution: cultural practices that work well acquire an aura of prestige, so people scramble to imitate them. This prestige-based imitation allows practices to spread throughout a culture fairly quickly. And if there are porous boundaries between collectives, members of a failing group may start to migrate to the group that seems to have better practices. According to Henrich and other scholars of cultural evolution, this is a version of Darwinian evolution. It can be modeled in terms of quantifiable selection processes.

But Pinker and his allies scoff, responding that calling these sorts of effects “evolution” is just an exercise in metaphor. Might as well use the language of evolution to describe anything: the adoption of the seat belt during the mid-20th century, for instance. Or even the slow wearing away of mountains: why not argue that the softer sandstone is “selected” away, leaving behind the more robust granite? Clearly, the metaphor has to stop somewhere, or else the term “evolution” becomes meaningless. Pinker, Dennett, and Dawkins think that the moment you use evolutionary language to describe culture or group processes, you’ve already reached that point of nonsensicality.

But similar dynamics – group competition, porous group boundaries, and migration – can also influence genetic evolution. In one fascinating experiment, evolutionary theorist Omar Eldakar and colleagues created groups of water striders with different proportions of aggressive and docile males. Within any single group, aggressive males bullied their way into copulating with females – often traumatizing them – and thus tended to be more successful than their docile counterparts. But understandably, females didn’t like being traumatized. Given their druthers, they’d take a pool with as few aggressive males as possible.

So the researchers gave them their druthers. By connecting the different sections of the pool with small channels of running water, Elkadar allowed striders to selectively migrate between different groups. As you’d expect, females tended to migrate to the pools with the fewest aggressive males. Breaking down their measurements mathematically, the researchers discovered that within any group, aggressive males had more mating success. But when females were allowed some freedom to migrate, being a docile strider was the winning strategy across groups.

Thus, the compositions – and outcomes! – of the groups slowly changed over time, precisely because the boundaries of the groups were porous. Clearly, these groups weren’t the discrete, self-replicating entities Pinker wants. They were diffuse, amorphous collectives, with lots of population churn. Nonetheless, they underwent real selection pressure, bringing down the average proportion of aggressive males in any given group, and shifting the genetic fitness pressures across the entire population. Groups that had lower percentages of aggressive males were more genetically fit – on average, as defined by successful matings – than groups with more aggression. Eldakar and colleagues mused that

we are clearly dealing with the kind of social behavior that has always been central to the group selection controversy, in which a behavior that is “for the good of the group” (non-aggression) is selectively disadvantageous within groups, requiring a multi-group population structure to evolve.

Of course, water striders don’t have culture, and they don’t imitate each other the way that humans do. Cultural selection isn’t the same thing as group selection. But both depend on a slightly expanded description of the Darwinian process. In this expanded understanding of evolution, the entities undergoing selection aren’t always discrete, countable replicators, but might be more diffuse or continuous. What’s more, boundaries – which, between genetic individuals, are pretty hard and unbreakable – are porous, allowing limited but efficacious migration between groups.

This is where Pinker, Dennett, and Dawkins throw up their hands, saying, “Well, then we’re not talking about evolution anymore!” But whether they like it or not, group-level processes do seem to have real evolutionary effects. For instance, one species of spiders form groups with different ratios of docile and aggressive members. A group in one setting might benefit from having 75% aggressive spiders, whereas in another environment it might be better to have a 50-50 ratio. When a team of researchers forcibly moved some groups, the groups continued to reproduce the same ratios that would have been adaptive in their old environments – suggesting that natural selection can stabilize group-level characteristics that are underpinned by genes.

In other words, it seems as if, evolutionarily speaking, groups are real. And mathematical modeling and laboratory studies show that they don’t have to be discrete replicators, churning out unique copies of themselves, for for this to be true. Selection pressures can influence groups even when they’re diffuse, messy things – very different from the pristine mathematics of countable alleles. This has direct implications for religion, which, according to many researchers, induces people to think more in terms of groups – Christian, Sunni, Hasid – than in terms of individuals. Next up: why Pinker and his friends hate the idea of cultural evolution.

This series is a fun challenge to research and write, even as it’s also a detour from my normal focus on recent research and topical issues. I appreciate those of you who’ve kept coming back to these posts, which are definitely more niche and specialized than the stuff I normally put up. Within the next couple of years, I’d like to write a full-length book on this topic, aimed at the general public – so this series is like a very loose first draft. Feedback, critiques, workshopping advice, and vociferous disagreement is welcomed.

* To the extent that the advertising and clickbait industries have allowed the survival of any “popular imagination,” which is to say not very much