In which I am interviewed for a Vlog 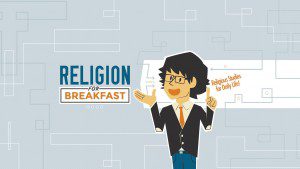 So recently I was interviewed by Andrew Henry, of the Religion for Breakfast vlog, on the topic of using computer simulations to study religion. In keeping with my tradition of promising to do follow-up posts on important topics and then not getting to it, I thought I’d post the two-part interview here, rather than writing the next article on the “big gods” hypothesis. (Sorry, Mark!) The big gods article is still coming, definitely sometime before the next presidential administration – which hopefully will not be our last one, although honestly, at this point, who knows.

Religion for Breakfast is a vlog (video blog) maintained by Boston University PhD student and early-Christianity expert Andrew Henry. Andrew has done real ancient-studies expert stuff, including participating in archeological digs around the Mediterranean and learning ancient Greek. Unlike Andrew, my knowledge of ancient Greek is limited to the point where I can’t even make it through your average poem by T.S. Eliot.* It was a privilege to be interviewed by such a smart dude. Here are the interviews:

* Eliot was a showoff anyway

June 1, 2016 Science explains why America is going off the rails
Recent Comments
0 | Leave a Comment
"Not just here, and not just now. The Chosen People included Nazi Germany, with a ..."
Epinephelus Itajara The Voice of Scientific Authority Is ..."
"I disagree. There are activists for causes I don't support- ones that I find heinous ..."
Epinephelus Itajara Geophysicist Dorian Abbot Loses MIT Lecture ..."
"Science offers no indication that we’re beloved children of God.The Bible is little better. God ..."
Bob Seidensticker Faith and the Evolutionary Predicament
"Very nice article. However, we need to stop calling these woke mobs activists. They are ..."
ginger_katz Geophysicist Dorian Abbot Loses MIT Lecture ..."
Browse Our Archives
get the latest updates from
Science On Religion
and the Patheos
Best of Patheos
Channel
POPULAR AT PATHEOS Public Square
1