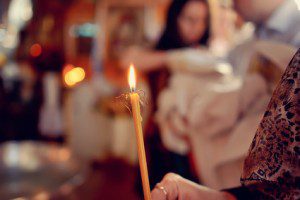 A couple of months ago, I hopped a Saturday afternoon flight to Vancouver for a conference. After arriving and checking in at my hotel, I had a few hours to kill, so I did what anyone would do: I dropped in on vespers services at a tiny Russian Orthodox church, tucked away in an anonymous residential neighborhood far from the downtown core. There, I walked through a simple wooden door and into a space resplendent with gold and candles, pungent with incense. As I stood there uncomfortably not knowing when to bow, an odd thing happened: I felt my muscles physically relax. This unexpected physiological response was a reminder of what ritual, in all its dumbfounding impracticality, means for human life.

I had been stressed all day, all week, all month. The tension had insinuated itself into the muscles in my back and forehead. I’d scrambled to assemble my research for presentation and rushed to make an early-morning flight from Boston. I hadn’t slept much. In short, I’d been in go mode for as long as I could remember, constantly accomplishing objectives and tasks. Everything I encountered – doors, computers, even people  – was subject to utilitarian calculation: useful to me, or not useful?

But when I passed through the exterior of the Orthodox chapel with its peeling white paint and into the dimly lit sanctuary, I was suddenly immersed into a dark and extravagant environment where nearly everything was…useless. Dozens, maybe hundreds, of painted icons hung or stood throughout the sanctuary, framed in gold and bordered by decorative spiral pilasters. Candles flickered beside and in front of the altars, and two opulent rugs sprawled across the perimeters of the sanctuary floor, designs swirling in intricate eddies of patterned red and gold.

In other words, not a thing in the church had a purely practical purpose.

That sort of defiant veneration of impracticality may be exactly what makes religion what it is. In his final book Religion in Human Evolution, sociologist Robert Bellah argued that religion emerged in part from the same patterns of behavior that animals exhibit when they play. Animals at play are in a “relaxed field,” or a psychological state that’s not concerned with immediate biological survival. Playing doesn’t accomplish anything like capturing prey. Instead, it takes place when animals, temporarily freed from the urgent tasks of living, devote their energy to exploring and recreation.

Importantly, play always requires artificial restraints on physical and cognitive capacities. Two lion cubs play-fighting don’t bite each other as hard as they could. They hold back, which is how we know they’re playing instead of really fighting. In the same way, we invent rules for games, placing arbitrary limits on what’s allowed. In baseball, we agree not to run outside the baseline; in soccer, we agree not to shoot from offside. There’s nothing physically holding us back from doing those things, but we agree to agree not to do them. They’re rules, not natural laws. That’s what makes a game possible.

As such, in a relaxed field, animals and people take part in behaviors that are, strictly speaking, unnecessary for pure survival. They roll around and goof off. They chase each other around. They creatively elaborate on everyday behaviors like running and jumping, making their gestures and postures more fanciful than they need to be.

Religion, in its infinite forms and varieties, exemplifies a similar principle.

The elaborate carvings and gold-leaf inlays in that little Orthodox Church weren’t necessary for anyone’s survival. In fact, the building itself wasn’t necessary – it didn’t serve as living quarters, it didn’t house grain or store medicine. The entire edifice was an extraordinary and stupefying celebration of uselessness – a hypertrophic instinct for play. The hypnotic patterns of knotwork in the iconostasis and the flowers around the central altarpiece and the curls of smoke wafting toward the cupola high above each conveyed the insistent message: “There’s nothing to do here. Relax.”

In the lush detail of the carvings and icons, in the spiral fluting of the many pilasters, my sensory apparatus was confronted with so many discrete patterns and elements that cognitive focus slowed to a crawl. In normal, everyday life, you quickly recognize items or objects you can either use, avoid, or ignore. You categorize things quickly. But in a densely ritualized environment like an Orthodox chapel, the sheer volume of objects and patterns is too great for such normal, sweeping generalizations. Your categorization processes slow down. Unable to immediately discern the instrumental purpose of each of thousands of gilded floral patterns in the iconostasis or the side altars, you find yourself scanning the golden interlacing forms over and over again. Your mind, derailed from its normal, instrumental track, succumbs to a kind of mild sensory trance.

I’m not just spitballing my reactions. The anthropologists Pascal Boyer and Pierre Liènard have pointed out that the seemingly pointless repetition and formal redundancy of human rituals “swamps” working memory, by forcing the brain to focus on low-level details instead of the whole process or function of the action. When soldiers fold an American flag after a funeral, for example, they deliberately exaggerate each discrete step, performing their actions with such conspicuous formality that observers’ attention is focused on every micro-movement rather than the final end goal. By overloading working memory in this way, ritual makes it very difficult to obsess over – or rush toward – brute practical objectives. Instead, it forces practitioners and observers alike to dwell on the subroutines of the task, as it were. And richly accented decorations and iconography are a kind of crystallized ritual, coaxing the mind into honing in on details and patterns.

All this sensory refulgence of the Orthodox vespers struck home because I was in the midst of a summer that was long on work – of all kinds – and short on play. Modern academic life can be rough. In ethological terms, science is almost the inverse of religion, because in science, everything is practical and very little is ritualized. In scientific thinking, decorations are distractions. The simplest theory that works is the best one.

Maybe it’s no coincidence that, as science has stepped further and further into the limelight of establishment culture, buildings and cities have streamlined, losing their former architectural embellishments in favor of sleek lines and spartan simplicity. After all, ornamentations like ionic pilasters or ivy bas relief carvings are self-imposed limits and conventions, meeting no practical need. By including such ornamentation in our buildings, we demonstrate irrefutably that our structures are more than practical. The element of play is literally built into to them. They’re anti-rationalist from the beginning.

In downtown Vancouver, by contrast, a bristling forest of glass skyscrapers glimmers homogeneously, lacking pillars, patterning, or ornamentation. They’re streamlined and elegant, those towers, like a scientific theory, and in their lack of embellishments, they can’t help but enforce an insistent discrimination between practical things – which are good – and useless things, which are bad. They’re beautiful in the sunset, but they stand sentinel watch against the instinct for play. Ironically, then, gleaming office towers – temples to progress and wealth – prompt us, at an information-processing level, to stay vigilantly, relentlessly focused on accomplishment. On the tasks of survival.

And gleaming office towers are what anchor nearly every major city, every place where successful people congregate. An international network of cities and airports and spaces reinforces the ethos of constant effort, of unremitting accomplishment, by virtue of the clean efficiency of its very structures.

That’s why my organism relaxed as I surveyed the sanctuary’s veritable kaleidoscope of knotwork, arches, and columns, and why my muscles uncoiled as the sparse choir’s incantatory chanting mingled with the smell of incense. The priest sang in Old Church Slavonic, an ancient liturgical language now used only for rites. It doesn’t get much more useless than resuscitating a dead language to sing hymns that no one – not even most Russians – will understand. But in the candlelit, darkened, gold-drenched space of the church, the droning of the ancient language served only to reinforce that what was happening here wasn’t supposed to be practical. It was supposed to be play – serious play. After months in the thrashing melèe of life, I was released, for a few minutes, from the psychic straightjacket of career-focused striving. With a week of conferencing in front of me, and then an autumn full of deadlines and trips after that, I was in for a busy, relentlessly goal-focused few months. But as the incomprehensible chanting rose higher with the smoke from the censer, I temporarily took leave from a half-frantic struggle for survival.

Edit: I updated the title for this post after it went live. 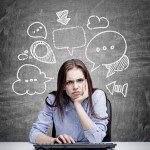