Social media is toxic. Religious studies tells us why. 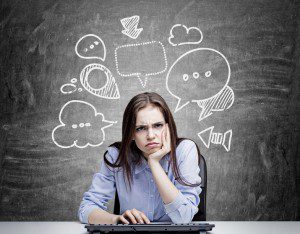 You know what’s been in the news a lot lately? Twitter. The erstwhile social media haunt of the dorky Beltway set circa 2009 is now being used for propaganda, for international communication, and potentially for fomenting Thucydidean wars. That’s right: we’ve literally entered a time in history when the president-elect of the United States can cause a major international incident by blurting out a half-formed thought directly onto Twitter. But you know what? He’s not alone. The internet is a place where all of our thoughts go live, just about as soon as we’ve thought them (and sometimes before). As it turns out, this is a major problem. It’s destabilizing. And religious studies – of all things – can help us understand why.

Wait. Religious studies? Isn’t that where people learn how to preach so they can become pastors or missionaries or whatever? No. Religious studies isn’t theology (the confessional study of sacred texts and beliefs). And it isn’t training for ministry. Religious studies is an academic field where researchers use secular methods to learn more about human religion. Religious studies scholars are historians, textual scholars, linguists, anthropologists, sociologists, and – increasingly – cognitive and evolutionary scientists. As professionals, they don’t advocate for any religion or creed. Instead, they study those systems, the way that biologists slap amoebae onto microscope slides at 100x magnification.

The field of religious studies has existed for more than a century, and during that time, it’s built up a massive storehouse of useful findings and knowledge that could really help society come to grips with the enormous problems we’re facing.

For instance, a religious studies scholar could tell why Twitter-caused international destabilization is really a problem of ritual.

#NoFilter Communication and the Ritual-Free Internet

There was a time when everybody assumed that the internet, with its unprecedented democratizing power, would lead to radical freedom and openness, break down national boundaries and historical divisions, and eventually birth a Golden Age of decentralized universal brotherhood, like in a Coke commercial. But that’s not what happened. Instead, the Web’s amorphous decentralization seems to have given people everywhere license to retreat into homogenous echo-chamber subcultures, severed from civic society and responsibilities, with standards of behavior and grammar that make 12-year-olds look like Oxford-educated diplomats. “Fake news” flourishes in this new, horizontal information ecology, because older authority structures – like network news or newspapers of record – can’t keep up with social networking sites and aggregated news feeds. No one has the position to enforce common standards or narratives. There are no filters. And without filters, disinformation and opinion spread like brush fire.

That’s where religious studies comes in. Religious studies scholars understand ritual. And lack of ritual is one of the major reasons why there are so few filters for information on the Web. Why the internet is a massive soup of heaving disinformation and groundless opinions. Why international leaders stand a chance of getting us all killed with poorly thought-out Tweets.

The average American’s definition of ritual is “a stodgy or meaningless action done for no very good reason, probably while wearing a silly hat.” But in fact, rituals are everywhere. They make social life possible. Whenever we shake hands with a new acquaintance, or say “hello” when we pick up the phone, that’s ritual. When we kiss our kids goodbye in the morning, that’s ritual. Simply put, rituals are socially constructed standards for behavior that ask us to act in certain ways regardless of how we’re feeling internally. Do you want to shake hands with that awkward co-worker from accounting? Maybe not. But you shake hands anyway, because that’s the appropriate thing to do. It’s a ritual.

Hence, although ritual is often associated with religion, not all rituals are religious. Many are what sociologist Erving Goffman called “interaction rituals,” or social rituals. And even the rituals that are religious, like a Passover seder – the annual dinner at which Jewish believers commemorate the Exodus from Egypt – are kind of like very complicated handshakes. If you’re Jewish and it’s Passover, you’re supposed to attend a seder regardless of whether you feel like it or not. Your personal feelings – whether you’re tired, hungover, happy, whatever – are less important than the obligation. In the words of anthropologist Roy Rappaport, “ritual demarcates a boundary…between private and public processes.”

So in a ritualistic society, people’s feelings don’t fly all over the place. People act more on the basis of how they’re supposed to act – dictated by their role and by the situation – and less at the prompting of fleeting urges and emotions. Even when someone does have an outburst, other people won’t easily pick it up and pass it on. The outburst tends to die down with the person who started it.

What about a non-ritualistic society, though? Well, take a look at the internet. It’s a social environment with practically no ritual. After all, ritual is usually an embodied thing – handshakes, bows, kneeling at an altar rail. So in a virtual world without tangible bodies, it makes sense that ritual is scarce.

But this means there’s no boundary between public and private. Or between people. As a result, we say things on Facebook we wouldn’t say in front of our boss. We emote. We broadcast our opinions reflexively, thanks to the online disinhibition effect. And the internet becomes an roiling melée of opinions and emotional outbursts, each picked up on, retweeted, and amplified.

What does all this emoting and public self-expression lead to? When everyone reacts to everyone else’s mental states, each momentary, personal opinion can influenc the entire wider community. Rappaport called this “hypercoherence.” He feared that, if the entire world system became too tightly connected, “disorders originating anywhere could quickly spread everywhere.” Arthur Demarest, a professor of anthropology at Vanderbilt University, agrees:

Hypercoherence is the close efficient linkage of all parts of the world economic, communication and transport systems.…Perturbations, even small ones, immediately radiate throughout the entire system.

Now, compare Rappaport’s and Demarest’s warnings about the dangers of hypercoherence with a recent article in The Atlantic, about the threat of weaponized social media:

Messages that resonate can be endorsed, adapted, and instantly amplified…Today, national leaders engage in Twitter spats, and rapid-fire hashtags draw international attention…events, filtered through social media, can quickly go viral – the very definition of spinning out of control.

How Lack of Ritual Feeds Polarization

But wait. Doesn’t social media push people into segregated corners on the basis of opinions and preferences, so that the entire internet is danger of becoming a collection of subcultural ghettos? Doesn’t the Wall Street Journal’s “Blue Feed, Red Feed” project show that liberal and conservative Facebook users get completely different versions of the news? How is the world falling into hypercoherence if it’s actually breaking apart?

But in fact, both hypercoherence and polarization result from the same lack of social ritual. As I mentioned above, in a ritualistic setting, people don’t blurt out everything that occurs to them. They also don’t easily overreact to others’ emotional outbursts. A community that abides by these rules can easily accommodate a wide range of diverse personal opinions and inner emotions – so long as they’re expressed at the right places and times, rather than 24 hours a day.

But when ritual dies down, people begin expressing their opinions and personal feelings more and more often, in all situations. In fact, the less ritual, the more the default social gambit is to express opinions and feelings. Because we want to affiliate with people who are like us, we start looking for others who think the way we do. In a de-ritualized environment, social groupings therefore become more homogeneous in terms of opinion and personality. But at the same time, they become less buffered against runaway chain reactions of opinion or emotion.

Which brings us to where we are, today. Many of us spend hours each day on social media, bereft of ritual or established set of conventions to structure our self-expression. As a result, pretty much all we do is…well, self-express. We blurt out our political opinions on Facebook. We emote on Twitter. We tell people what we think of everything.

We make our private worlds public.

Much of this behavior is motivated by the need to show the world what type of person we are, so we can identify and find others like us. In a way, we’re trying to find community. But real communities invariably contain people with different opinions and personalities. That’s why so much social interaction is shaped by ritual in the real world. First you shake hands, then you talk about the weather – and only then do you get into politics or religion. It sounds banal, but this kind of everyday social ritual keeps a community together when its members disagree.

As we’ve transitioned into a society where ritual is a thing of the past, we lose that glue – and we gain runaway viral emotions. The system becomes increasingly unstable. When you add a personality like Donald Trump’s into the mix – a veritable hurricane of random impulses, blurting passing thoughts onto Twitter, which tens of thousands of like-minded people immediately reflexively retweet – you get the potential for real chaos.

Religious Studies Is What We Need

Okay. We understand how the internet has unsettled social networks worldwide. We’ve seen why online conversations seem to slide out of control so quickly. It’s because, in real life, social rituals act as dampeners on emotional reactivity. Once you remove dampeners, things get unstable. That’s how social life works.

What’s key is that these insights come from religious studies – including its sister fields of anthropology and ritual studies. The secular, academic study of religion has agglomerated a century’s worth of knowledge about how ritual operates. If you have that body of knowledge, then the daily news isn’t so overwhelming, because you understand the reasons behind a lot of it. In other words, religious studies makes sense of the chaos into which we’re descending. This chaos is going to be with us for a while. It’s time to start paying attention to the scholars who understand it.