Is college too liberal? 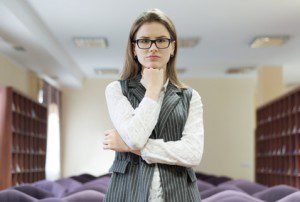 A recent article in Boston Magazine claims that “liberal professors are ruining college.” The author, Chris Sweeney, reports that the ratio of liberal to conservative professors in New England colleges is a staggering 28 to 1. Thanks to this ideological lopsidedness, conservative students at left-leaning schools like Brandeis or Middlebury report feeling unable to express their views in class or disagree with their professors. At Science on Religion, I’ve often tackled questions of political ideology and culture. And as the Trump administration destructively continues to drive wedges between progressives and conservatives (almost as if it were on purpose!), Sweeney’s article raises a question that fits neatly into that arena. Does the overwhelming dominance of liberal perspectives on college campuses actually have negative effects, even in the Trump era? Yes – but those effects extend far beyond campus. And professors aren’t necessarily to blame.

Statistically speaking, liberals really do outnumber conservatives among American professors. The ratio varies across the country, ranging from 3:1 in the South to 6:1 on the West Coast – but in New England, the ratio is more than four times higher than anywhere else. This matters because New England is by far the leading U.S. region for higher education. It hosts four Ivy League universities – including both Harvard and Yale, which you may have heard of – alongside dozens of other leading institutions like MIT, Tufts, Brandeis, and my humble alma mater, Boston University. What happens in New England has an outsized influence on academia as a whole. So when faculty conservatives essentially drop off the college map here, it may be, as one professor put it, a “canary in the higher education coal mine.”

This ideological skew has many effects, and many aren’t good. Most particularly, it leaves colleges unprepared to teach students anything at all about the 60-70% of the country that isn’t progressive. This can lead to a widening cultural gap of misunderstanding between the college-educated left and the non-college educated…well, most everyone else. Noting that liberals are vastly overrepresented in higher education,  the Washington Post recently bemoaned the fact that

The world of academia is, therefore, different in terms of political temperature than the rest of society, and what is common knowledge and conventional wisdom among America’s campus dwellers can’t be taken for granted outside the campus gates.…Thus today’s college graduates are formed by a campus culture that leaves them unable to understand people with unfamiliar or heterodox views on guns, abortion, religion, marriage, gender and privilege.

This doesn’t mean that liberal views on these issues are wrong. What it means is that students who don’t learn about  alternative views – say, that gender isn’t just a social construct, or that privilege isn’t synonymous with oppression – don’t have any idea how to deal with people who actually do hold those views. The nonprofit group Heterodox Academy, which advocates for “viewpoint diversity” in higher education, points out that this constitutes a failure of responsibility on the part of colleges. Without enough ideological diversity in college classrooms, students just don’t learn to think like their opponents think. As a result, they often dismiss conservative viewpoints as raw bigotry or mean-spiritedness – because they genuinely can’t imagine why someone would hold conservative beliefs otherwise.

This lack of comprehension doesn’t go both ways, either. In a kind of ideological Turing test, Jonathan Haidt, a co-founder of Heterodox Academy, found that conservatives are better at “pretending” to be liberals – that is, arguing for liberal opinions in ways that reflect how liberals really think – than liberals are at pretending to be conservatives. In other words, liberals misunderstand the motives behind conservative opinions, but conservatives don’t misunderstand liberals as badly. Again, this doesn’t mean that conservative views are correct. It just means that liberals are more likely to be misreading their opponents. Given that liberals tend to be more educated than conservatives, this one-way misunderstanding is a bad sign for political discourse. And, according to NPR, it’s becoming more pronounced, particularly at the highest educational levels :

So Are Liberal Professors to Blame? Nope.

But is higher education actually to blame for ideological polarization? To hear conservative commentators tell it, academia is a cesspool (really – that word shows up disturbingly often) of liberal indoctrination. But there’s reason to think that liberal college professors aren’t actually to blame for the uptick in college liberalism. Indeed, students are showing up on campus as freshmen already far more liberal – and “far left” – than freshmen of previous generations. So something seems to be changing in the water at the high school level or younger, leading college-bound young people toward the extreme left in adolescence. In fact, interacting with college professors seems to moderate students’ extremism – whereas spending a lot of time around other students seems to make it worse.

So conservative critics are wrong: it’s not that subversive, long-haired college professors are seducing innocent students into  leftism. The professors are liberal, yes. But the students are bringing leftism to campus. If the predominance of liberal professors contributes to polarization, it’s because even the best-intentioned liberal professors can only do so much to genuinely confront left-leaning students with alternative worldviews and ideas. A professor who is a moderate, mainstream liberal but has never read Edmund Burke (a philosopher often called the father of modern conservatism) can’t teach students about the canon of intellectually rigorous conservative thought.* Those students will then go on angrily thinking that conservatism is synonymous with racism and institutionalized oppression. They’ll never learn that Burke, for example, argued forcefully for the rights of minority Catholics in Anglican-dominated England, or that he stridently criticized British imperialism in India, complaining that Hinduism was the religion best suited to India, was indelibly tied to Indian culture, and ought to be left to thrive on its own.

So in the ideologically monochromatic modern university, stereotypes about conservatives or religious believers can fester unchallenged – not because professors are ill-willed, but because they don’t actually know much about non-progressive ways of seeing the world. It’s a (less malignant) mirror image of Fox News’s predictable misrepresentation of liberals.

If universities and colleges are going to actually do their job as the gatehouses for society’s leaders, they need to include voices and perspectives from the more conservative, traditionalist, and – yes – religious layers of the culture. Many well-educated liberals don’t like this suggestion, because they often think of college as precisely where you go to free yourself from such outdated worldviews.

But the fact is that, as the 2016 presidential election reminded us yet again, large swathes of the country simply aren’t onboard with the liberal consensus of the college-educated set. Whether we like it or not, we all have to share the country with people we disagree with. The more well-informed we are about how our ideological opponents actually think – not just facile stereotypes about them – the better we’ll be able to articulate our own perspectives. Debate will ultimately be more fruitful. (This would be a good thing.)

Colleges and universities are, after all, the institutions that train and prepare society’s future leaders. Their administrators and professors should feel a manifest obligation to increase their own ideological diversity, so that our leaders aren’t clueless about the 75% of the population that lack their education. Because, really – the last thing we need right now is more clueless leaders.

* No, this is not an oxymoron.

January 14, 2017
Trump shows why Rationalia would fail
Next Post