Cognitive biases don’t explain religion, after all May 11, 2017 Connor Wood 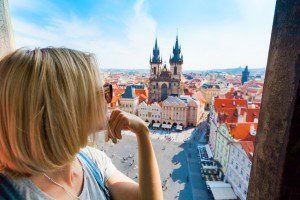 If you’re familiar with the cognitive science of religion, then you’ve probably heard the term “hyperactive agency detection device,” or HADD. The HADD is one of today’s most popular explanations for why people believe in God or gods. It proposes that the human brain is equipped with a hair-trigger mechanism that perceives personhood – that is, intentions and purposes – everywhere in the world. This mechanism is why you see faces in campfire flames or jump when you hear a twig crack in the woods. According to the HADD hypothesis, these perceptions are the reason for human beliefs in gods and spirits – and, hence, the cognitive foundation for religiosity itself. But religiosity is a often lot more than seeing faces in clouds or campfires. It’s also rituals, texts, moral codes, community, and funny hats. So, really, how much of religion boils down to cognitive biases for detecting agency? According to new research from the Czech Republic and Slovakia, the answer might be “not much.”

These two countries are uniquely excellent case studies for why some people become religious and others don’t. For decades after World War I, the Czech Republic and Slovakia were united as one country, called – truly, an inspired leap of human imagination – Czechoslovakia. Today, the two countries are close neighbors and E.U. members with a great deal of shared history, but with one crucial difference: the Slovakian population is highly religious and churchgoing, while the Czech Republic is one of the world’s most atheistic countries. This unique situation offers a stellar opportunity to test hypotheses in the cognitive science of religion about why people become religious, since so many other important demographic variables are naturally controlled for.

If, you know, someone wanted to do that.

Fortunately, somebody did. Scooping everybody else in the cognitive science of religion, psychologist Aiyana Willard and economist Lubomír Cingl recently decided to take advantage of the cultural and historical similarity of the Czech Republic and Slovakia to test which theories best explained why the former was so much more secular than the latter. They gathered data through an online marketing platform, eventually surveying more than 1,000 residents in each of the two countries, or more than 2,000 total. (That’s a lot of people, especially considering that many psychology studies use only around 60 participants, or 30 each in a two-condition design.)*

In their survey packets, Willard and Cingl asked subjects about their beliefs in God, their paranormal beliefs (such as psychic phenomena or the existence of ghosts), and how much they participated in organized religion such as Sunday church services. The researchers also included questions to test three major hypotheses. First, there was the secularization hypothesis. This is the well-known claim that, as economic and social conditions improve in any given society, its people will simply drift away from religion. According to the secularization hypothesis, people in the Czech Republic might be less religious than those in Slovakia because the Czech Republic is slightly wealthier, more stable, and better-educated. Willard and Cingl tested this prediction by asking subjects how secure and stable they felt in life, and by looking at objective demographic data.

The second hypothesis was the cognitive bias hypothesis. This is what lies behind the HADD theory: we human beings come pre-packaged with hypersensitive tendencies to perceive minds and purpose in our surroundings. These perceptions, in turn, lead us to assume that there are spirits, fairies, and gods lurking in every nook and cranny of the world. It could be that people with weaker cognitive biases would be less religious. To determine the strength of people’s cognitive biases, Willard and Cingl asked questions about how prone the participants were to anthropomorphizing (projecting human qualities onto the inanimate world), believing in mind-body dualism, and thinking that natural processes have purposes (teleology). They also tested for analytical thinking skills and empathizing skills. Willard and Cingl predicted that cognitive biases alone probably wouldn’t explain the difference in religiosity between the two countries, since biases are presumably innate and equally distributed across populations. But you never know, right?

The third hypothesis was that differences in religiosity would be explained by credibility-enhancing displays. These displays, abbreviated CREDs, are actions that people perform when they sincerely believe in the tenets of their religion. A committed Christian probably goes to church each Sunday, prays before meals, and celebrates Easter. A sincere Muslim prays five times a day, pays the zakat tithe, and saves up for pilgrimage to Mecca. But if you don’t truly believe, you probably won’t go to the trouble of doing all those things. To test for CREDs, the researchers asked subjects how often their parents had participated conspicuously in religious activities when they were growing up. Their prediction? People who hadn’t seen grown-ups acting religiously when they were children would themselves be less religious – and believe less in God – as adults.

Examining their results, Willard and Cingl found that Slovakians were much more religious and theistic than Czechs, but both nationalities believed in the paranormal equally. Looking at the secularization hypothesis, education decreased beliefs in the paranormal but had no effect on religious practices or belief in God, while social and institutional insecurity were correlated with stronger beliefs in the paranormal and mildly correlated with increased religious practice. (For example, in areas with higher unemployment, people went to church more.) However, these effects were really small, leading the researchers to conclude that the secularization hypothesis couldn’t explain why Slovakia is so much more religious than the Czech Republic – particularly because both countries have similarly high levels of human services and fairly strong economies.

What about the cognitive bias hypothesis? As the researchers expected, there were no differences between Slovakians and Czechs when it came to innate predispositions for analytical thinking, teleological reasoning, mind-body dualism, or empathic ability. Interestingly, Slovakians scored slightly – but significantly – lower on anthropomorphic tendencies than the less-religious Czechs, which is the opposite of what the HADD hypothesis would predict. Overall, cognitive biases accounted for a very small percentage of the difference in belief in God, but for more than one-fifth of the difference in paranormal beliefs.

In other words, people with strong cognitive biases such as teleological reasoning, mind-body dualism, and holistic or intuitive thinking were much more likely to believe in astral travel or psychic abilities, but only very slightly more likely to believe in God. Cognitive biases had almost no effect on religious attendance. And biases didn’t explain any of the difference in religiosity between the two countries at all.

But while the secularization and cognitive bias hypotheses mostly fizzled, CREDs had a remarkably strong effect on religious practice and belief. In all, Slovakian respondents reported that, as children, they went to church much more often, and saw more adults practicing religion, than Czechs. In turn, childhood exposure to CREDs predicted significantly higher levels of adult religious belief in God and church service attendance. This relationship mediated (explained) a good deal of the relationship between nationality and religiosity: 70% in the case of belief in God, and fully 80% in the case of religious practice. In other words, young Slovakians saw more adults praying and going to church – and went to church services more often themselves – than their Czech counterparts, and these divergent childhood experiences were the lion’s share of the reason why Slovakians were more religious as adults. The authors concluded that

The exposure to religious rituals and parental displays of religious commitment in childhood accounts for more variance than any other set of variables in our sample.…Religiously raised participants in Slovakia were exposed to higher levels of CREDs than their Czech counterparts…CREDs variables accounted for a substantial amount of the country level difference in both belief in God and practice, even when the sample was restricted to only religiously raised participants.

So exposure to CREDs seems to influence adult religiosity a lot more than cognitive biases. Does this falsify the HADD hypothesis? Not necessarily. Willard and Cingl point out that cognitive biases could give rise to generalized supernatural beliefs – like spirits or an afterlife – which in turn provide the foundations for institutional religion. So evolved cognitive biases might be part of the origin story of religion, but a lack of cognitive biases isn’t a good explanation for why some countries – or people – become more secular.

Of course, while CREDs explained much more of the difference between the two countries’ religious tendencies, there still must be a reason why Czech parents took their kids to church less often than Slovakian parents in the first place. But looking for this reason brings us up against the limits of scientific methods. Specifically, one key difference between Slovakia and the Czech Republic is historical, not scientific: during the Cold War, the Catholic Church was a potent symbol of resistance against the oppressive USSR for Slovakians, whereas for most Czechs it wasn’t. The fact that the Catholic Church played a critical role in Slovak public life and patriotism may have ensured that Slovakians retained their allegiance to the faith, kept going to church, and raised religious children. On the other hand,

In the case of the Czech Republic, a history of skepticism of the Catholic Church as an institution paired with the communist ban on public religiosity may have been the spark that precipitated the decline in religiosity.

This led the authors to warn that

When evaluating individual cases, like this one, it is worth investigating if a single idiosyncratic cause can explain the decline of a specific religion separately from supernatural belief more generally.…What broad theories like this do not always reflect is the inherent cultural nature of people. In the quest to find singular theories that can explain these complex processes, the psychological and evolutionary sciences can often miss the important role of culture and how much we, as humans, learn from others. Further research across more diverse religious groups is needed.

In other words, scientific theories can’t explain everything about religion, and we need to pay more attention to specific events and cultural histories. (It’s almost as if religion is…complicated.**) But what we can conclude from this study is that hyperactive agency detection or anthropomorphic tendencies aren’t the main reason why some people become religious and others don’t. It has a lot more to do with the rituals people participate in and the culture that surrounds them. As usual, God doesn’t easily boil down to a flipped switch in the brain.

* Full disclosure: I am one of the people who does studies like that

** As one of the few people working in the evolutionary study of religion whose PhD is in religious studies rather than psychology or cognitive science, this is what I think about that.

April 26, 2017
In New Zealand, religion reduces prejudice – but media inflames it
Next Post

May 22, 2017 Science and religion really are in conflict, people
Recent Comments
0 | Leave a Comment
Browse Our Archives
get the latest from
Science On Religion
Sign up for our newsletter
POPULAR AT PATHEOS Public Square
1