In New Zealand, religion reduces prejudice – but media inflames it 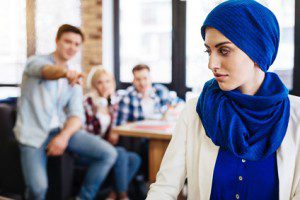 In the minds of many, religion causes divisions, prejudice, and misunderstandings. Famous glasses-wearing person John Lennon once fondly envisioned a world that had no national boundaries and “no religion too.” Those two dreams – no faith and no borders – fit well together because religion and division so often go hand-in-hand. Right? Well, sometimes. Religion can demarcate differences between ethnic groups – think Palestinians and Israelis – and even leaves a genetic impact, preventing members of differing faiths from marrying and having offspring with each other. But recent research from New Zealand shows that, in some cases, religion can reduce prejudice, too. More religious New Zealanders are more tolerant of immigrants and Muslims, while nightly news watchers – who ought to be well-informed – are more prejudiced.

These findings come from two studies recently published in the open-access journal PLOS ONE. Both studies used the groundbreaking New Zealand Attitudes and Values Study (NZAVS) for their data – a massive mail-in survey that collects intricate, long-term responses from real New Zealanders on a staggering range of topics. Since 2009, a revolving team of psychologists, anthropologists, and religious studies scholars has gathered annual waves of data from thousands respondents nationwide for the NZAVS. For these studies in this post, the authors, led by University of Otago researcher John Shaver, looked at data from the 2013 wave of data collection, which included more than 18,000 respondents.

Both studies used Bayesian statistical analysis to predict which variables influenced New Zealanders’ attitudes toward three outsider groups. In the first study, the out-groups of interest were Muslims, Arabs, and immigrants. The researchers drew their hypotheses from a theory they call “evolutionary lag,” which predicts that religion will lead to intergroup prejudice in high-conflict settings – again, think Israeli-Palestinian tensions – but will actually decrease prejudice in contexts where intergroup competition and conflict are low.

Including demographic variables such as age, gender, and socioeconomic status in their statistical model, the study’s authors found that both religious identification – considering oneself a member of a church or denomination – and attendance at religious services predicted more feelings of reported warmth toward Muslims, Arabs, and immigrants. Importantly, this effect held across religious groups and denominations. The authors interpreted this finding to mean that the culture of New Zealand in general allows for a positive relationship between religious belief and acceptance of out-groups.

Other factors did predict prejudice (or lack thereof) toward outsiders, though. Men typically reported more prejudice against Muslims, Arabs, and immigrants than women. Conservatives followed the same pattern of high prejudice, while liberals, true to stereotype, tended to be more tolerant. Unsurprisingly, education also had a large effect – people with college degrees or postgraduate education were much less prejudiced than people without a college education.

Crucially, it was the most religiously committed survey respondents who drove the positive effects of religiosity on tolerance. People who called themselves religious, but who didn’t actually attend church, were a little bit more prejudiced against Muslims and Arabs than their secular counterparts. This finding parallels other studies that have found that it’s religious attendance, not just self-identification as a believer, that shapes measurable outcomes (for both good and ill). Shaver and his co-authors concluded that, in this NZAVS sample, religious prejudice is the consequence of “a commitment to traditionalism without strong religious identification or community connection.”

The Media is the Mess

In the second study, published just last month, Shaver and a slightly different team of co-authors examined the same NZAVS dataset from 2013 to see whether exposure to news and media affected anti-Muslim prejudice in New Zealand – a fairly peaceful nation that hasn’t suffered from any serious terrorist attacks by Islamist groups. Most New Zealanders haven’t had personal negative experiences with, say, Islamist jihadists that might motivate anti-Muslim prejudice – as, for example, many residents of Paris or Boston may have. Because of this, the researchers posited that any prejudice against Muslims in New Zealand would likely be the result of exposure to news stories or other media.

As before, the authors were interested in subjects’ attitudes toward Muslims. Since popular perceptions – and, more importantly, media portrayals – often conflate Islam with Arabic ethnicity, Arabs were again the second out-group of interest. But in a change from the previous study, the authors elected to choose Asians as the third out-group. Why? Because, in New Zealand, most Muslims are actually ethnically Asian, descended from ancestors in countries such as Malaysia or Indonesia.

In other words, in New Zealand the stereotype that “Muslims are Arabs” just isn’t true, even though the New Zealand media tends to associate Islam with Arabic ethnicity. The vast majority of Muslims in New Zealand are non-Arabic. That’s important because, if anti-Muslim sentiment is actually the result of media stereotypes, survey results should show strong correlations between prejudice toward Muslims and prejudice toward Arabs, but less correlation between attitudes toward Muslims and Asians.

After conducting another round of Bayesian regression analyses, this is just what the researchers found. New Zealanders who watched more hours of television news per day reported more anger and less warmth toward Muslims than those who watched less news. News consumption also predicted a trend toward more anger and less warmth toward Arabs. (This trend achieved marginal significance for warmth.) But watching television news had no effect at all – not even the hint of a trend – on respondents’ attitudes toward Asians.

Television news sources in New Zealand typically portray Muslims in a negative light. It’s no wonder that persistent exposure to news sources would lead people on both the left and the right to view Muslims with more suspicion and less warmth. But in a country whose immigrant population is overwhelmingly peaceful, it’s a tragedy that supposedly objective news sources could so easily whip up anti-Muslim stereotypes.

These two studies show that we still have a long way to go toward understanding the roots of prejudice and intergroup conflict. Superficial rules of thumb don’t always apply. Religious commitment – often thought to be a major driver, even the major driver, of social divisions – can inflame prejudice in some settings, but dampen it in others. And while education reliably lessens prejudice, exposure to information in the form of news media makes it worse.

Of course, these conclusions only apply to New Zealand. But given that the island country shares many traits with other Western societies – for example, democratic government (for now), strong economy, and multicultural diversity driven by immigration – it’s not absurd to expect that many of these findings would apply to countries such as the U.S. or Canada, where religious groups aren’t in life-or-death conflict with each other for resources. Media portrayals of Muslims are often just as biased in those countries, as well.

In the long, difficult, and possibly unwinnable fight to overcome our species’ tribal nature, great thinkers have often lashed out at religion as a fountainhead of in-group prejudice and narrowness. But as I’ve pointed out here recently, world religions such as Christianity or Islam contain strongly universalistic messages, too. As worshippers attend church or the mosque, whatever messages they hear will become more and more salient. If your pastor preaches about brotherly love each Sunday, that message starts to stick. But if you hear a message of hostility toward Muslims or pagans instead, then attending religious services probably won’t turn you into a paragon of tolerance.

Shaver and his co-authors observe that religious leaders have a lot of power to determine which religious messages their congregations hear. In conflict-torn regions those leaders often aren’t motivated to highlight the tolerant and universalistic aspects of their faiths. But in peaceful times and places, religious commitment paves the way for religious tolerance.

At least until you turn on the nightly news.

May 11, 2017 Cognitive biases don't explain religion, after all
Recent Comments
0 | Leave a Comment
Browse Our Archives
get the latest from
Science On Religion
Sign up for our newsletter
POPULAR AT PATHEOS Public Square
1

Finding joy in 2020? It's not such an...
The pandemic and political turmoil have left many people feeling anxious, angry...
view all Public Square blogs
What Are Your Thoughts?leave a comment
Copyright 2008-2020, Patheos. All rights reserved.