Arie: How a Cracker Barrel Waitress and a Baptist Mechanic Opened My Heart

Arie: How a Cracker Barrel Waitress and a Baptist Mechanic Opened My Heart August 1, 2014 Guest Contributor 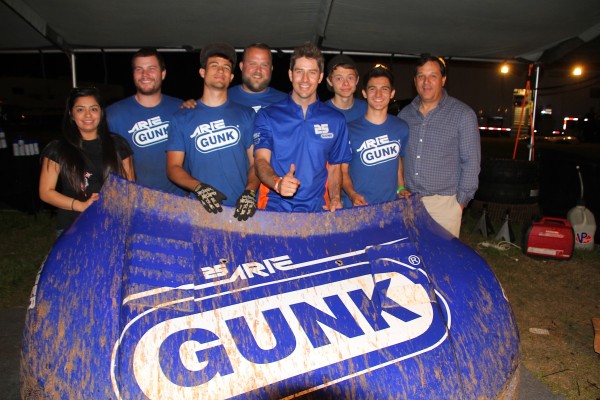 I walked into the Cracker Barrel, was seated, and fiddled with the wooden triangular brain teaser.  Normally, I can solve those things, but on that day – after driving thirteen hours straight – I was struggling.

“I can only get it down to four little pegs,” the waitress said as she approached my table and saw my frustration.

“What does it mean that I have five left?” I asked.  When I looked at the waitress, I saw a wave of familiarity flash across her face.  I’d gotten used to be recognized and never minded connecting with people who’d watched Season 8 of The Bachelorette… when Emily Maynard broke my heart in front of the world, instead choosing my buddy Jef Holm.  The waitress never mentioned anything, but she smiled very kindly.

“Maybe you just need some coffee,” she said.

It had been a pretty big season for me, because it was the first year I’ve owned my own team.  Normally I am just hired to drive, so I faced a great deal more responsibilities. “The Off-Road Championship” (TORC) consists of fourteen races over the course of several months.  The first race of the year – in Primm, Nevada – shook me up a bit, when I crashed and broke my collar bone. After the first race, we moved onto Charlotte where rounds three and four were held. I was short on help for the weekend so a fellow race team referred a guy named Fred to me for help.  Fred, who works on Hendricks NASCAR team, agreed to come help out my team for the weekend.

On the day of the race, Fred and his two sons showed up and proved themselves to be tireless workers, and it paid off.   It was first podium finish of my off-road racing career!

After the Saturday night win, we celebrated my first podium of my Off-Road career.  As the night wore on, we still had so much work to do: breaking down the pit space and loading the truck and equipment.

“It’s getting late,” Fred said.  “It’ll take you until three o’clock in the morning, at this rate.”

I looked at the pit space and sighed.

“Listen, I’ll come back in the morning with my sons and help you out,” he said.  “On one condition.”

“What condition?” I asked.

“If you’ll join me at church tomorrow morning.”  Apparently, Fred was a preacher at a Baptist church in North Carolina and was determined to get me into a pew.  But the offer was enticing to me and my tired mechanic, so we went back to the hotel for some well-deserved sleep.  The next morning, we took a cab to the church and sat in the row next to the others.  Church was not my natural habitat, but I liked Fred, his sons, and all they’d done for me.

As I sat there in that building, I was skeptical. Pastor Fred wasn’t speaking – there was a guest preacher that day, who happened to be hilarious. The message which was about accepting God into our lives, but I didn’t feel any pressure to make a spiritual commitment. The service was inspiring, and – as the preacher wrapped it up — I felt I’d fulfilled my part of the deal.

To my surprise, at the end of his sermon, the Pastor asked if anyone would find it in their heart to come to the track directly after the service and help me break down and load up. Half of the little church, which was located near the track, came and broke things down. Pastor Fred and I spent some time getting lunch for everyone and chatting about where I was at with life, my faith, and what I thought about the experience at church.

It was very touching that these strangers were willing to come out to the racetrack and help me.

When all the work had been done, I shook Fred’s hand.

“Thanks so much,” I said, before reaching into my wallet. He’d done so much work that weekend, it was time to pay him and his sons for their help before I went to my next location. That’s when he turned down payment and instead handed me a book.

It was an old Bible that looked like it had been in his family for years.  I could tell someone had read that thing, because the pages were worn and certain passages were underlined, and he held it like a prized possession.  He wrote in the front, saying he was giving the book to my mechanic and me.

“Take it so you don’t forget what you learned this weekend.”

“Are you sure you want me to have it?” I asked, touched by his selfless act.

That book came along with me as I traveled from that point on.  In fact, the Bible sat next to me in the front seat of Betsy (yes we named our race hauler).  It began to change me as I read it at night before going to sleep, though sometimes I felt I needed help understanding.  Regardless, I knew there was powerful stuff in there.  The Bible comforted me as I traveled from place to place…  sometimes it was hard to keep track of where I was or where I was going.

When I made it to Cracker Barrel for lunch that day, I had another three or four races under my belt and had made it to Springfield, Missouri.  I’d been driving thirteen hours – straight through the night — and was completely exhausted.

To be honest, I was a little lonely.

Vote for Arie in Sean’s “Who Should Be the Next Bachelor Poll!“

The yellow embroidered name on the brown uniform of my server read, “Tara” and she came back to the table quite often to make sure I had everything I needed.  She never mentioned the show, but we talked for a bit and she was very kind.  Before I left, she asked me for a photo.

Later I received a message on Facebook from her, and what she wrote has stuck with me ever since. She told me that she enjoyed getting to know me, and that she found me to be humble and kind.  (She also included a Bible passage – which was very endearing — plus, it made me think more deeply about where I am in my life.)

Her note gave me the realization that I may have let things get to my head in the past – the television, the resulting embarrassment of Emily’s rejection, and the race track — and I finally realized I was back to the same old me, the same person I was before being on TV. I hadn’t become someone completely different, but all of that does change you in a way. After the show, I was more guarded and a bit less open to finding someone.

Meeting Tara at Cracker Barrel somehow showed me that I was finally myself again.  She said that she sensed that I was compassionate and humble… she also said this Bible verse reminded her of me:

“Lord, thou hast heard the desire of the humble: thou wilt prepare their heart, thou wilt cause thine ear to hear.”

Actually, it gave me hope. Emotions are easy to hide when your distracted, being in the race car has always been my therapy. But I don’t want to be distracted from life’s promises any more.

Since America last saw me, I’ve been running around the country racing my cars and trying to figure out a lot about life.  As you may have heard, I’m being considered to be the next Bachelor. However, I don’t want to be on the show for the attention, or to go to exotic locations.  In fact, I travel too much as it is.  I want to go on the show for the opportunity to dedicate the time to find love instead of traveling for racing.  I’m tired of letting my relationships take a back seat to my career.  The show would give me the opportunity to slow down and meet someone willing to be a part of my life – as crazy as that life is.  I want what my parents have always had…  a lifelong partnership of love and adventure.  I know I’m ready for change.  I’m ready for marriage.  I’m ready to open my heart up again for love.

More than anything, I guess, I want someone who can join me as I continue my spiritual journey that Pastor Fred jumpstarted and that Tara has inspired.

The Bachelor is all about journeys, right?

I’m ready for my next one.

Vote for Arie in Sean’s “Who Should Be the Next Bachelor Poll!“

August 1, 2014
SURVEY: Who Should Be the Next Bachelor?
Next Post

August 6, 2014 "How Contrived is The Bachelor?" A Pastor Asks Me About Faith, Life, and Reality TV
Recent Comments
0 | Leave a Comment
"Agreed. I would update your post. Here is a link to PetMed advising the harmful ..."
Jennie Bui McCoy A Mind Blowing Tip on Calm ..."
"I was disappointed to hear Arie’s conversation with Tia on this episode of the Bachelor. ..."
Michelle Arie: How a Cracker Barrel Waitress ..."
"I watched tonights episode of the Bachelorette Jan 29, 2018 and was concerned about Arie's ..."
Jerry Robin Finin Arie: How a Cracker Barrel Waitress ..."
"Phil 4:6 is one of my favorite Bible verses :) Having an attitude of gratitude ..."
PreciousbutRare When I bought a new car, ..."
Browse Our Archives
get the latest from
Family
Sign up for our newsletter
POPULAR AT PATHEOS Family
1

If You're Marriage is Hanging on...
Ashley Willis
Related posts from Sean Lowe

When to Forfeit and When to Fight
There are two kinds of people in the world - those who...
view all Family blogs
What Are Your Thoughts?leave a comment
Copyright 2008-2020, Patheos. All rights reserved.