Evolution is Our Story 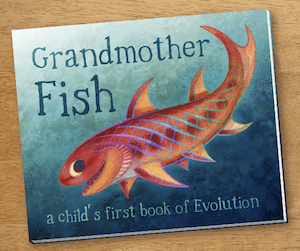 Last year, I decided to self-publish an ebook that would teach evolution to preschoolers. The book is based on manuscripts that I’ve worked on for fifteen years, and I figured that an ebook would be cheaper to self-publish than a hardback book. But when I told people that I was working on a book that taught evolution to little children, their eyes would light up. Maybe it’s because I live in Seattle, but people respond strongly to the idea. The response was so positive that I decided to raise funds for the book on Kickstarter, the online platform that lets creators crowdfund their projects. With funding, the book could be hardback. During the campaign, we received endorsements from Daniel Dennett, Steven Pinker, and others who saw the value in this project. My artist and I raised over $36,000, and Grandmother Fish releases in April.

Launching this book has taught me how excited secular people get about evolution, and that got me thinking. Religious people have plenty of symbols and books to rally behind. In fact, people in earlier times invented these religious symbols and books in order to better rally people into groups. We secular people have given up the religious institutions and symbols that help religious people feel united. Without church and faith, what can secular people feel united about? Apparently, there’s not much. We can’t feel united with people of our own sect because we don’t follow a sect. If atheists unite around anything, it seems to be a hatred of religion.

But negativity is a terrible thing to build a community around. As bad as Martin Luther King had it, he never tried to build a community around hatred. In other words, one of the linchpins of the atheist community — hating religion — is bad for the atheist community. This animosity makes the atheist community unpleasant for lots of people, and there are plenty of atheists in the US who refuse to give themselves that label. So other than hostility, what can secular people rally behind? In my experience, lots of us are excited to rally behind evolution. As a common cause, evolution works great because it’s scientific, mysterious and personal.

Power of Science: Science has won the struggle for hearts and minds. As the famous atheist PZ Myers points out, the opponents of science still pretend to be scientists. Deepak Chopra refers to quantum physics to bolster his mystical ideas about cosmic consciousness. Creationists make all sorts of noises about genetics and biology, and they put dinosaurs in their museum. Those dinosaurs belong to science, not creationism, but kids love dinosaurs. Even Pat Robertson says that if Christian parents fight science, they will lose their children. He is right because science has won. Evolution wins because it’s scientific, and it’s real science.

Mystery of Evolution: While evolution by natural selection is an established fact, it’s still an intriguing mystery. How did life begin? Was there really a Cambrian Explosion? What light does evolution shed on human behavior, especially social behavior? A religious mystery was originally a secret that insiders knew and that was revealed to initiates. Today a religious mystery is something that no one can really understand, not even the pope. The trinity is a good example: how can three persons, one of whom has two natures, be one being? A scientific mystery is better than a religious mystery because it’s something that we might be able to figure out through research. Scientific mysteries invite exploration.

Our Story: Of all the sciences that secular people might promote, evolutionary science has a special place in our hearts because it’s our story. Religious sects all have their stories about where living things came from, us included, and how we living things got this way. As E. O. Wilson says, false creation myths put religions on the wrong path. Evolution covers the same ground. It’s very much about us. It’s about who we are and how we relate to all the miraculous living things that abound on this marvelous planet. Affirming one’s continuity with all living things, says Neil deGrasse Tyson, is a soaring spiritual experience.

Celebrating Evolution: In the last several years, people have begun celebrating evolution with Darwin Day (February 12) and Darwin Weekend (this year, February 13–15). Ironically, liberal churches have been leading the way. This year, the governor of Delaware has issued a proclamation in honor of Darwin Day. In addition to Darwin Day, evolution proponents have found Kickstarter to be a good way to reach people.

I’m not the only creator who has used Kickstarter to reach fans of evolution. Supporters are passionate about this topic and generous with their support, while traditional publishers are wary of a “controversial” topic, so crowd-funding is ideal for evolution-themed projects. Here are some notable successes among projects that promote evolution.

Great Adaptations, a children’s book of evolution: This book features numerous light-hearted children’s poems about specific aspects of evolutionary science. The author, Tiffany Taylor, had already self-published Little Changes, a children’s book that explains natural selection. This time she works with David Sloan Wilson and other evolutionary scientists to cover many interesting topics, such as flukes that manipulate the behavior of the fish that they parasitize. Each poem ends with a biographical note of the scientist whose work the poem is based on, plus notes on the science behind the poem. This book raised over $50,000.

Grandmother Fish, a child’s first book of Evolution: Preschoolers wiggle like fish or hoot like apes as they learn about our common descent. My book is due out in April, and you can preorder it here.

The Universe Verse – A rhyming graphic guide to our origins: This book by James Dunbar sets the deep history of the universe to rhyme. It covers everything from the Big Bang through the origin of life on earth to the evolution of humans. The hardback book raised $26,000 on Kickstarter, and the ebook is available here.

Go Extinct! Go Fish… evolved: This kids’ card game plays like Go Fish with extra options. My favorite part is the phylogenetic tree that serves as the “board.” Each card is a tetrapod, defined by it’s place in the evolutionary family tree. The “tree of life” is an important concept in evolution, and this game gets kids to interact with the concept in a fun way. As a bonus, the creator, Ariel Marcy, has come up with kid-friendly names for the various clades on the tree. The game raised over $16,000 on Kickstarter and is now for sale here.

Defend Evolution With Clear Friendly Instruction: This project funded lively, informative animations that explain evolution and defend it against detractors. The creator, Jon Perry, raised over $12,000 to for his project and now hosts his animations here.

Evolution: This View of Life Online Magazine: Robert Kadar raised over $5,000 to launch an online magazine devoted to showing how the theory of evolution informs all aspects of life and society. The magazine, hosted by the Evolution Institute, is available here.

The story of our common descent gives us secular people a marvelous and personal “creation story” that, for the first time in history, is true. It gives us something positive to share, to affirm and to celebrate. It’s a universal story, rising above sectarian or ethnic traditions. And it has dinosaurs for kids and scientific riddles for adults. Honestly, the dinosaurs are for adults, too. It’s our story. Let’s celebrate it. 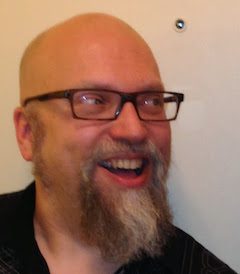 March 11, 2015 How to Reconcile God and Evolution...and How Not To
Recent Comments
6 Comments | Leave a Comment
Browse Our Archives
Follow Us!

Crokin: Tom Hanks to Be Arrested...
Dispatches From the Culture Wars
Related posts from The Secular Spectrum