A Summer of Advocacy: an HAF Intern’s Story

Patheos Explore the world's faith through different perspectives on religion and spirituality! Patheos has the views of the prevalent religions and spiritualities of the world.
September marks both the start of the school year, and the end of the summer. And Faren Rajkumar, a young Hindu American, shares her reflection in this guest post about being an advocate this past summer: she was an Advocacy Intern at the Hindu American Foundation’s DC office. A long-time volunteer with the South Florida HAF chapter, she completed photojournalism and writing programs at the University of Florida and the City University of New York. Currently, she is working on an MFA with a poetry concentration in pursuit of a writing and teaching career, and also does freelance news and copy writing, blogging, and editing. When she isn’t working or composing poetry, Faren loves re-reading her favorite novels, promoting vegetarianism, and, of course, advocating for Hinduism.
What Does Advocacy Truly Mean?

As the Hindu American Foundation and delegates from across the country reflect on our 13th annual DC Congressional Advocacy Days, I ask myself an important question: What does it truly mean to be an advocate?

Perhaps we can define being an advocate by first recognizing those who lack the opportunity, education, and resources to communicate their struggles and concerns to the often inaccessible leaders of our world. These are political refugees, religious minorities, bullied students, uneducated immigrants, and other disregarded individuals. They are all American citizens or newcomers to our nation, in precarious situations with desperate needs.

As a Hindu and an Indian in the U.S., I am outnumbered by other religious and ethnic groups, but this summer, I find myself in our nation’s capital representing a young generation of educated, passionate students striving to make a difference in the political sphere. It would be inappropriate to compare my identity struggle to the plight of refugees and severely ostracized minorities, but my own life experiences have undoubtedly helped me to understand the importance of rallying for a cause and building a community for those who feel alone.

An advocate is everything these abused and marginalized groups are not. An advocate is a representative of truly American ideals such as freedom of speech and religion.

I am a member of a religious and cultural minority in America who has often felt conflicted about my identity, struggling to preserve my people’s ancient, esoteric past while assimilating to a contemporary society that often overlooks anyone outside the majority.

Even though I identify as an Indian Hindu living in the U.S., my family is from Guyana – a South American nation home to 270,000 Hindus. My ancestors emigrated from India, like so many, in pursuit of more promising futures. Even though most of us remained devout Hindus, we no longer speak Hindi, many of us have non-Indian names, and I myself have never set foot on Indian soil. I was born in the U.S., raised on rock and roll, the English language, and 22 years of Halloween and the Fourth of July. Yet, I have brown skin, dark hair and eyes, and pray to a blue-faced god, so I cannot simply say “American” when asked what I am.

For many years, especially during high school and college, I told the abridged version of my history, calling myself “Indian” in partial denial of my family’s complicated past. It has been easy to forget about Guyana, since it seems just as distant to me as the banks of the Ganges. But out of respect for the sacrifices made by my ancestors who left India to re-settle in a strange land, I have resolved to never again omit them from my personal narrative. Their blood, memories, and pains are also mine.

Today, I choose “Hindu” as my reigning identifying trait, because it is the Hindu American community that has turned this country into a real home for my family. Working as an advocacy intern for HAF, and more importantly, as an advocate during the 13th annual DC Advocacy Days, is my way of contributing something meaningful to the community that has given me so much.

Our foreign policy priority this year focused on a long-standing issue involving Bangladesh and U.S. relations, particularly as they pertain to victims of the mass violence committed during the 1971 war. Three million Hindu and secular Bengalis were killed and another 10 million were displaced. Recently, violence and political turmoil has upsurged with the rise of radical Islamic groups, displacing 5,050 families and destroying 1,699 Hindu temples between 2013 and 2014. Not only are these direct violations of human rights, but violations of the American principles of free speech and religion. This issue was discussed at great length during the inaugural Policy Conference, just one day before we met with our representatives on Capitol Hill to speak in support of the resolution. Hindu Americans should care deeply about the status of our country’s relations with Bangladesh, because these victims are our Hindu brothers and sisters. They are fleeing a volatile political climate where LGBT people are openly murdered in the street, Hindu priests are beheaded, and both non-Muslims and less-fundamental Muslims receive daily death threats.

Even though these victims are oceans away from the U.S., the massacre of 1971 and present day waves of terror acts have left scars on the Hindu Bengali community that any decent society cannot and should not ignore. As a fellow democratic nation, the U.S. should increase its cooperation with Bangladesh to protect human rights, the rule of law, and secular democracy.

The importance of protecting our Hindu brothers and sisters cannot be overstated: even though I can never understand the pain and losses felt by a political refugee, I myself have often experienced life on the fringe of our religious community, oftentimes not accepted by some communities because of my Guyanese heritage or criticized by others for denying it. I’ve also felt the pangs of discrimination as a brown kid growing up in a white, Christian-majority state. Our way of life is reduced to caste, curry, and cows, and the beauty of our beliefs in cosmic unity and respect for all living things is lost. We cannot allow Hinduism to be distorted and forgotten, which can begin with defending one another at home and abroad.

If ever we are accused of clinging too tightly to the past, our ultimate defense is the evidence that history has always been humanity’s greatest teacher. The American Jewish community is a close friend of HAF, and often serves as a model when our fledgling community seeks ways to protect and preserve its identity. Because of their passion, dedication, and most importantly, their refusal to forget the past, the Jewish community has ensured a safeguard against another holocaust. The Hindu community is learning from their example.

We spoke to members of Congress during our advocacy days, explaining the depth of our passion behind both of these foreign and domestic policies, and as an intern experiencing D.C. for the first time, it was a gratifying introduction to a summer full of promise. Most of my generation is disillusioned with the American political process, from our dissatisfying choices for president to the never-ending party squabbles that result in gridlock. But speaking to our representatives and their staff gave us renewed hope that change can indeed be accomplished in our lifetimes.

Hinduism is an eternal religion that has no beginning and therefore no end, and I am proud to be an advocate for my way of life, and grateful to be able to witness the positive impact of dedicated, caring individuals who allow dharma to guide their lives. 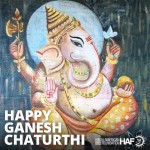 September 5, 2016
Ganesha Chaturdhi and the Start of the Academic Year
Next Post