This article is part of the Public Square 2014 Summer Series: Conversations on Religious Trends. Read other perspectives from the Pagan community here.

Whenever I confront my personal ethical choices around sustainability and ecology, I realise that everything depends on everything else. One choice may be more sustainable than another, but it may have other deleterious effects. You fix one part of the ecosystem, another gets broken. You try to fix poverty by donating clothes to charity shops (thrift stores) and then discover you have undermined small-scale indigenous clothing manufacture. You buy fair trade goods and then discover that they have been shipped over vast distances.

This interconnectedness of everything shows that we need a massive global paradigm shift, not merely a cosmetic fix to our already broken system. Capitalism – the practice of creaming off profits to give to shareholders and investors who do not contribute directly to the enterprise – created the opportunity to exploit people and resources, and got us into the mess we are in now. I recently watched a documentary on the origins of the industrial revolution, and it was very clear that it could not have got started without capitalism to fund it, and consumerism to drive demand for the commodities that were produced. Manufacturing snowballed in response to the stimuli of investment and consumer demand.

As others have already outlined, we are in a huge mess right now, and we need action. Climate change is already happening, sea levels are rising, species are dying off. It might be worse if there had not been an environmental movement, and if Pagans had not existed. This is also the premise of the excellent book Hope in the dark: The Untold History of People Power, by Rebecca Solnit.

Two things give me hope: deep ecology and trophic cascade.

Deep Ecology is the radical idea that all life has the right to exist, that no one species is more important than another.

According to Judi Bari, “Nature does not exist to serve humans. Rather, humans are a part of nature, one species among many. All species have the right to exist for their own sake, regardless of their usefulness to humans”.

Biodiversity is essential for the continued existence of the living Earth. As part of this biodiversity, humans must learn to live within nature, according to nature’s laws, and learn to accept our role as one among many.
— Centre for Deep Ecology

Environmental justice and social justice go hand-in-hand. You can’t solve world poverty unless we are all in right relationship with the Earth:

‘Deep ecological solutions are the only viable solutions to ensuring that every person on this planet has enough food, has enough water, has adequate shelter, has dignity and has a cultural meaning in life. If we don’t follow the path of living in ways that we leave enough space for other species, that paradigm also ensures that most human beings will be denied their right to existence. A system that denies the intrinsic value of other species denies eighty percent of humanity, their right to a dignified survival and a dignified life. It only pretends that is solving the problems of poverty, it is actually at the root of poverty. And the only real solution to poverty is to embrace the right to life of all on this planet, all humans and all species.’

So we all need  to change our perspective to one of deep ecology, rather than seeing environmentalism as some kind of ‘add-on’ to our existing lifestyles.

How will this change of perspective come about? Like any paradigm shift, it started with individuals who were ahead of their time, and has gradually been building momentum. Sadly, so has climate change, but this means more people will wake up and smell the coffee. We can take action to speed up the process of change. We can re-enchant the world that capitalism and the industrial revolution disenchanted.

There are also interventions that can be made to restore ecosystems.

One of the most interesting discoveries of recent years has been trophic cascade. This is the discovery that if you restore a major predator to an ecosystem, other species recover.

For example, restoring wolves to Yellowstone Park resulted in a decrease in elk, but an increase in the tree species that elk would otherwise have eaten, and consequently an increase in beaver and bison, as well as carrion birds which benefit from the remains of the wolves’ kills.

Restoring beavers to river systems has resulted in the creation of more pools, and hence more habitats for fish and plants.

The problems that climate change has brought, is bringing, and will bring will be severe and disastrous. Maybe we can ride out the storm; maybe it is too late; but if we despair and do not act, it will definitely be too late. 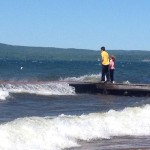 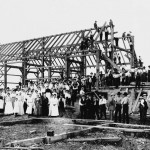