Is Betsy DeVos Ushering in a New Age of Segregation?

Is Betsy DeVos Ushering in a New Age of Segregation? May 27, 2017 Shane Phipps 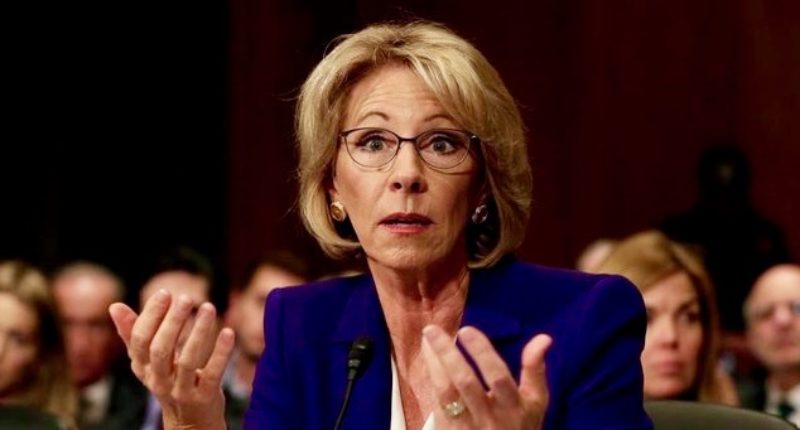 It’s no secret that President Trump is a big proponent of school choice and vouchers. His selection of Betsy DeVos to head up the U.S. Department of Education was, perhaps, one of his most controversial appointments. Mrs. DeVos has little to no pedigree in education. Her main qualification for the job appears to have been that she donated a boatload of money to the campaigns of many top GOP candidates. That, and she is a bulldog for school choice and vouchers to provide money to families to move students out of their public school and into the schools they choose, including private schools.

Vouchers might sound good to you on the surface. So what’s wrong with providing families an opportunity to send the kids any school they want and giving them money in order to do it?

First, families do have school choice already. It’s called moving. If you don’t like the school where you live, move to another school district. Isn’t that the kind of advice the GOP normally offers people who are down on their luck?

This idea that tax dollars should be spent to send kids to schools where they don’t live would normally be a very un-GOP-like idea. So why is it so popular among Republicans?

What if the answer is that Messrs. Trump, Pence, and Mrs. DeVos don’t truly want all kids to have school choice?

This is not an unfounded accusatory question I’m asking.

Mrs. DeVos was testifying before Congress last week during discussions of the proposed 2018 budget, which features a 13.5% cut in education spending, by the way. During the testimony a representative was using the example of a private religious school in Indiana that has very clear language in its admissions policy that they do not accept LGBQT students, or even straight students from LGBQT parents, yet this school is eligible to receive voucher money. The representative asked Mrs. DeVos if she thought a school with such discriminatory discretion should be eligible to receive tax-funded vouchers. With a cool detachment that would have made Pontius Pilate proud, Mrs. DeVos continually stated that she supported the states’ rights to make such decisions for themselves, effectively washing her hands of the responsibility to protect the rights of kids being denied equal opportunities. The Congresswoman was incredulous, as she should have been, and continued to grill Mrs. DeVos to make sure she was clearly implying what she seemed to be implying. Mrs. DeVos steadfastly maintained her position that she did not think the federal government should intervene in cases like that, and that federal voucher money should still go to such schools if the state approved it.  You can watch the video clip here.

If you aren’t greatly bothered by that, change the scenario. What if a private school refused to admit Catholics? What about Irish? What about blacks or Latinos? All of those groups have faced terrible discrimination in our not so distant history.

Are you really comfortable with your tax money being used to help families send kids to schools that have carte blanche to turn away students for identity-based reasons?

What we are watching unfold here could be tantamount to the beginnings of government sanctioned segregated schools.

This is supposed to be a big reason to have a national Department of Education, to guard against this kind of garbage. Having a federal department to oversee our nation’s education system, in theory, should help assure that every student has an equal chance. Not all federal law has been good for education, not by a long shot, but without it, where would minorities, kids with special learning needs, or physical disabilities be?

What Mrs. DeVos is refusing to stand against is the same kind of discrimination Ruby Bridges and the Arkansas Nine fought so hard to overcome in the days before there was  a national Department of Education. We have already seen what can happen when states are allowed to make their own policies on education without federal accountability.

And neither is this.

May 28, 2017 Old Tools, Old Men, and Legacy
Recent Comments
0 | Leave a Comment
Browse Our Archives
get the latest from
Empathy Mining
Sign up for our newsletter
POPULAR AT PATHEOS Politics Blue
1