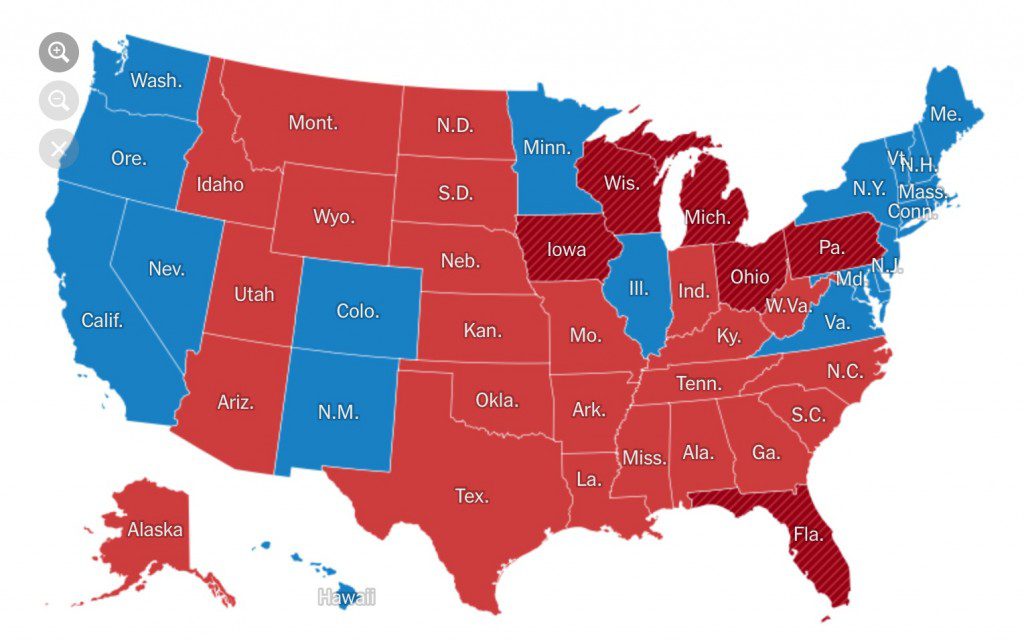 If you follow American politics at all, you are familiar with maps like the one above.  It is, of course, a map showing how states voted in a presidential election. The one above happens to be the most recent election and shows the states Donald Trump won in red and those won by Hillary Clinton in blue. Since the election of 2000, we have assinged red to Republicans and blue to Democrats when using these maps. Maps like these tell a story, but they don’t tell the whole story. Coloring an entire state one color is quite misleading and not particularly useful. The impression is made that everyone in Texas, for example, is a Republican and everyone in California is a Democrat–that’s pretty far from realistic.

Other kinds of maps do a better job of showing a more accurate picture. Take the one below, for instance– 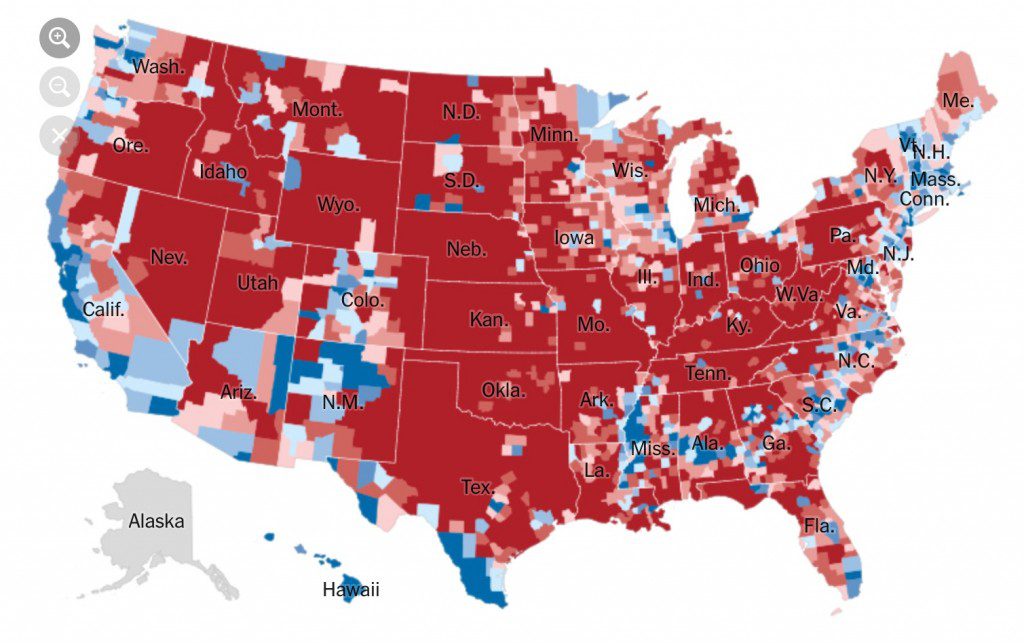 This map shows the results by county, instead of state. It also shows different shades of blue and red to indicate just how strongly or weakly that county tended toward the candidate. Here, if we look at Texas and California again, we see large chunks of other colors within the boundaries of those states. Clearly, this reveals more information than the first map, but it also covers a great deal of information up. Looking at the county map, one might get the impression that Hillary Clinton was completely dominated in the election–something we know was far from the case since she actually won the popular election by several million votes. The reason the first two maps are so misleading is that they color vast areas of the country red–vast areas where few to no people live.

Take a look at the following map– 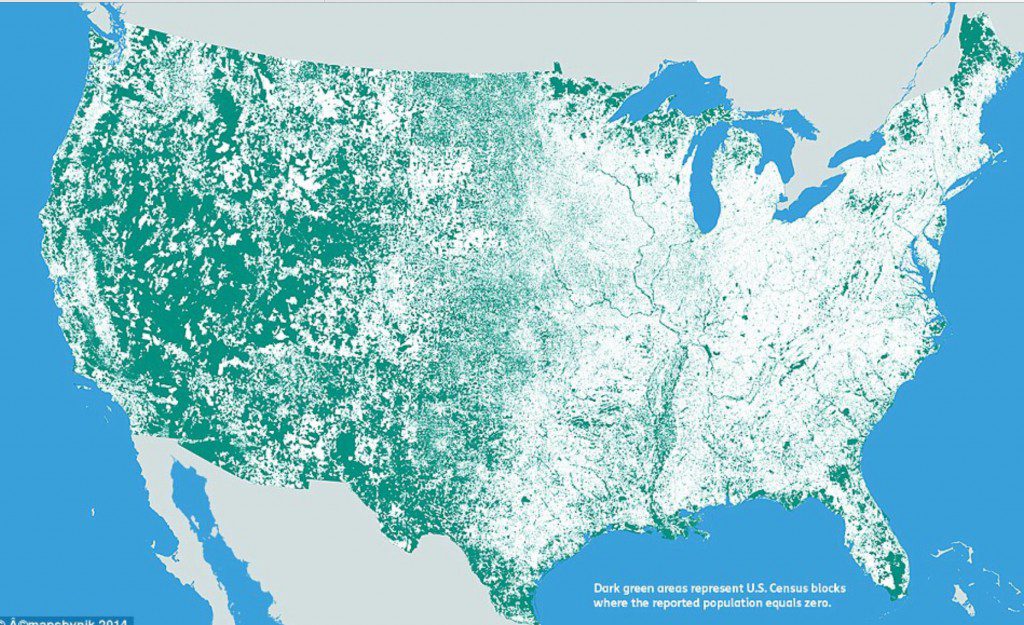 The areas shaded green on the above map of the U.S. are uninhabited–nobody lives there! Now look back at the first two maps. See the problem with the way we color them?

If you want a much more accurate election map from 2016, take a look at the following one. 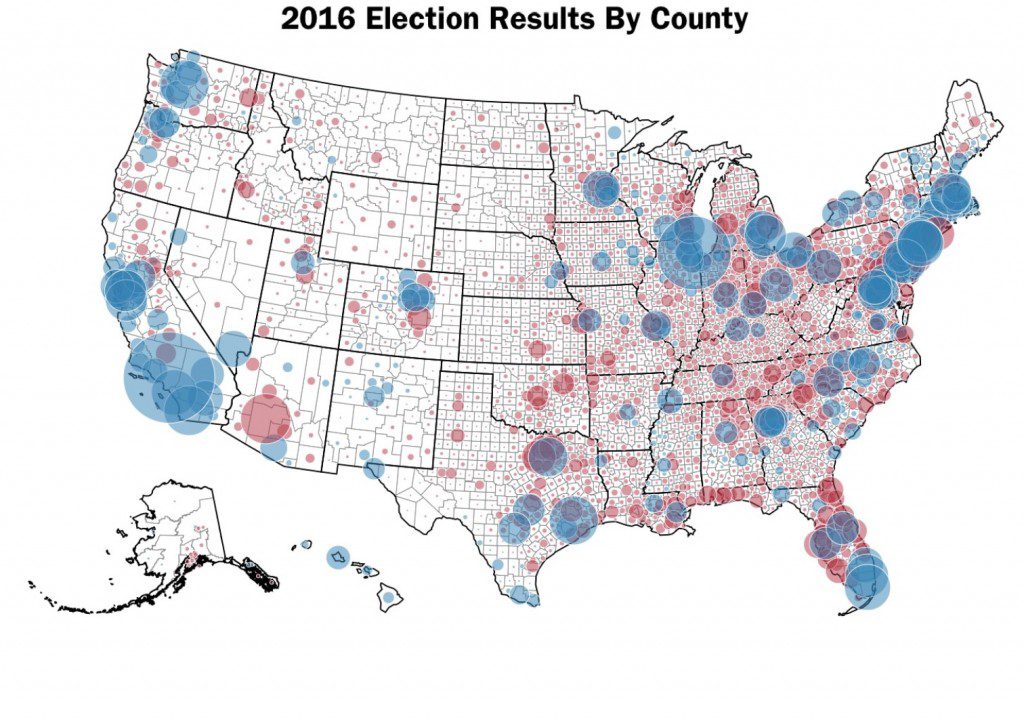 This map tells a much different story. It leaves those vast areas of sparsely inhabited or uninhabited land unshaded. Now we see actual people represented instead of real estate.

We also see the Islands of Blue.

Most of the major cites of our country tend to vote for Democratic candidates–it’s no secret–and it makes the folks in the vast red areas of the map feel threatened, so they will often vote for Republicans at all cost. They form hard and fast negative opinions about those people who live in the Islands of Blue. To the people in Red Country, those Blue Islanders are everything that is wrong with our nation–godless, communistic, terrorist-welcoming, cop-hating, baby-killing, sexually perverted heathens–and they would sooner die than live among them or be associated with any candidate they’d support.

Never mind that even in the Islands of Blue there are pockets of red and out there in the vast Plains of Red, there are veins of blue.

Without our Islands of Blue, we’d be in sad shape, indeed.

They say variety is the spice of life. Islands of Blue offer spice.

People who live in the Islands of Blue tend to understand that our diversity has contributed to advancements beyond those of most anywhere else in the history of humanity.

People in the Islands of Blue have, by necessity, had to learn to coexist, cooperate, and collaborate with people from every imaginable walk of life and, by and large, they’ve made it work and, often, made it beautiful.

There are milllions of wonderful people living out there in the Red portions of America, too, and for peace, quiet, serenity, and natural beauty, Red America is hard to beat, but diversity is harder to find–so too, is progress. Many of these good, well-meaning folks live in isolated areas without much to offer in the way of career options. Or they live in dead or dying towns where the factories shut down years ago. They believed Donald Trump when he spoke to them about bringing back “America’s greatness.” They forget that Donald Trump is a native of the Islands of Blue and has built a vast empire out of opening businesses in them and in other far flung parts of the world.

As I write this, I am traveling through the state of Georgia, a state that is colored red on that first map. We drove through one large Island of Blue–called Atlanta–then back into the red. The red parts look largely the same, one town to the next. Trump signs are everywhere–Make America Great Again–so are signs warning readers to follow the teachings of Jesus–one wonders exactly which teachings they mean–and so are strip clubs and pornography shops on nearly every exit–and the Confederate Flags, always with the Confederate Flags….

I’m from Red America. I love Red America–but my heart is breaking for her. She’s been sold a bill of goods and she either doesn’t realize it yet or is too stubborn and proud to admit it.

I get somewhat confused as I travel through the red parts of the map these days.

I think confusion has taken up residence here. 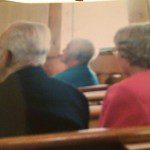 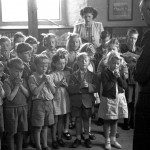 June 25, 2017 The Not-So-Veiled Agenda to Push Christianity Into Public Schools
Recent Comments
0 | Leave a Comment
Browse Our Archives
Follow Us!