Lessons in Love and the Little Rock 9

Lessons in Love and the Little Rock 9 February 2, 2018 Shane Phipps 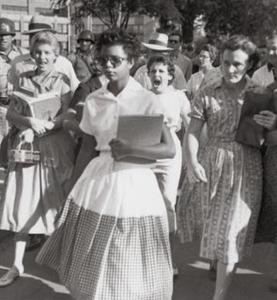 It’s the beginning of Black History Month. I’m going to try to share some black history throughout the month as I get the opportunity.

I’ll start with this fine lady. Her name is Elizabeth Eckford. Because of this famous photo, she became perhaps the most iconic of the group of black high school kids from Arkansas known as the “Little Rock 9.”

They were chosen to be the group for the first attempt to desegregate the schools in Little Rock, Arkansas.

On September 3rd, 1957, as the kids tried to enter Little Rock Central H.S., they were harassed by a huge and angry mob of whites, taunting and threatening them with lynching. They were stopped from entering the school by armed National Guardsmen under the order of the Arkansas governor.

After a couple days of failed attempts to get into the school they’d been given the right to attend, Eckford and the Little Rock 9 were forced to study at home for a couple weeks while the federal government attempted to negotiate a peaceful resolution.

Finally, on September 23, 1957, the Little Rock 9 were escorted into a side entrance to the school under armed police escort. An angry mob actually managed to enter the school trying to get at the Little Rock 9, who were forced to take cover in the principal’s office.

For the rest of the school year, armed National Guard soldiers stood sentry in the school yet, that wasn’t enough to prevent several incidents of violence, including Elizabeth Eckford one day being thrown down a flight of stairs.

Elizabeth Eckford eventually earned her BA in history. She served 5 years in the army where she wrote for her base newspaper. Later, she worked as a history teacher, a welfare worker, and a probation officer.

In 1999, she was awarded the Congressional Gold Medal by President Clinton.

Elizabeth Eckford is still living, as are all but one of the Little Rock 9. She is 76 years old.

But that isn’t all of the story. Some of those people in the photo angrily walking with Elizabeth–and those are but a few of them as some estimates place the number in the crowd as high 1,000 people–are still alive, as well. The majority of them, no doubt, considered themselves good, God fearing Christians–even as they were intimidating and threatening 15 and 16 year olds simply because they didn’t want kids with dark skin sitting in the same classroom as their white children. Likely, most of the angry whites in that mob gathered at their places of worship later that same week. Some of their ministers probably spoke about the coming evils of desegregation from their pulpits.

We must never forget that evil and hatred can be spread in the name of Christianity just as much as it can from any other group of people. We are all capable of it if we allow our hearts to become darkened to the needs of our fellow man–if we allow our souls to become blinded by the light from the wrong source. If any of those in that mob that claimed to be Christians had taken one moment to consider this question–if Jesus were here today, would he be walking alongside me hurling these racial slurs and making angry threats at these children for attempting to go to school?–they would have immediately fallen to their knees in shame, gotten up, and slinked home to beg for forgiveness.

One can hope that time has softened many of the hearts of the people in that mob. I’m sure many of them have changed. But I am just as sure that some of them just buried their bigotry from public view for decades. I’m certain that some of them were waiting for a leader to emerge who would rally them once again–to embolden them to step out and speak up in the light of day again. They were waiting for someone to call out for us to “Make America Great Again.”

It astounds me to think how recently all that madness happened–and to think that it wasn’t just an isolated incident in Arkansas. It was just one early test of Civil Rights that would lead to more than a decade of tension, hatred, violence and, yes, a good bit of courage, love, and heroism. We must also remember that much of what was spawned during that era reflected the best of Christianity and showed us how love can change the world. Even with angry mobs of whites promoting hatred and evil ideology, there were many others who joined with the righteous cause and risked their own well-being for the least of those their brothers and sisters. That fact shouldn’t be lost in our appraisal of the era. It took people of all races and faiths coming together in love to effect lasting change. It will take the same to insure that we don’t take steps backwards in our own time.

Yes, what sometimes seems like ancient history isn’t really ancient at all. The Little Rock 9 were going through their travails a mere 10 years before I was born. I simply can’t imagine what Elizabeth Eckford, her eight compatriots, and millions of others like them have had to go through just to get an education. It makes me ashamed of myself for taking my educational opportunities for granted—for taking all my freedoms and opportunities for granted.

Yes, eight of the Little Rock 9 are still living.

They are true heroes.

I don’t want to speak for them, but I’ve got a feeling they aren’t big fans of red MAGA hats.

January 31, 2018
"Beautiful, Clean Coal" Reveals the Manipulation of the Masses
Next Post 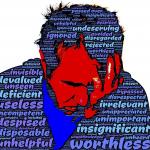 February 4, 2018 Battling Rejection through Faith
Recent Comments
0 | Leave a Comment
Browse Our Archives
get the latest from
Empathy Mining
Sign up for our newsletter
POPULAR AT PATHEOS Politics Blue
1