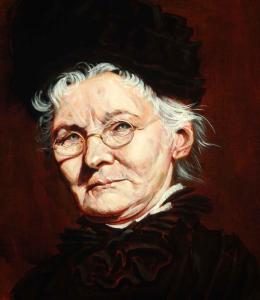 As teachers in several states have been striking for better compensation and working conditions, I have been spending a lot of time reflecting on our nation. I’m having a hard time wrapping my mind around some of our problems in a way that makes sense. I am going to try to tie together some of my scattered thoughts about it all here–bear with me.

Before I begin, a disclaimer; I am not a socialist nor a communist. I am a capitalist. I still believe in the American Dream. But, allowed to run amok, capitalism is no better than any other flawed economic model. I look around our nation and that is what I see, capitalism–in its seediest and greediest form–run amok. I have begun to see income inequality as the number one problem facing America. I believe it is at the core, as either a cause or a symptom, of almost all of our national woes. We have a system where a very few control almost all of the wealth and the vast majority scratch and claw for the mere pittance of droppings the wealthy leave behind. The American Dream is still alive, but it is so far away from many Americans that it is becoming almost impossible to see. When I see those throngs of teachers gathered outside their state capitols, these are the thoughts that dominate my mind.

My thoughts began to become more crystalized as I was listening to NPR yesterday. They were talking about wage gaps in corporations. One statistic floored me and it really brought home a question that I think is vitally important to consider. In some corporations, the CEO makes a salary 1,000 times greater than that of the company’s average employee. Put another way, an average employee at some companies would have to work for 1,000 years to make what his or her CEO makes in a single year. For some reason, that just really sunk into me immediately and shook me to my core. Is any human being worth 1,000 times more than another (provided they are law-abiding and productive members of society)? I have a very hard time answering yes to that question.

I posted a poll about that topic on my Facebook page. The screenshot below shows my poll and the results. 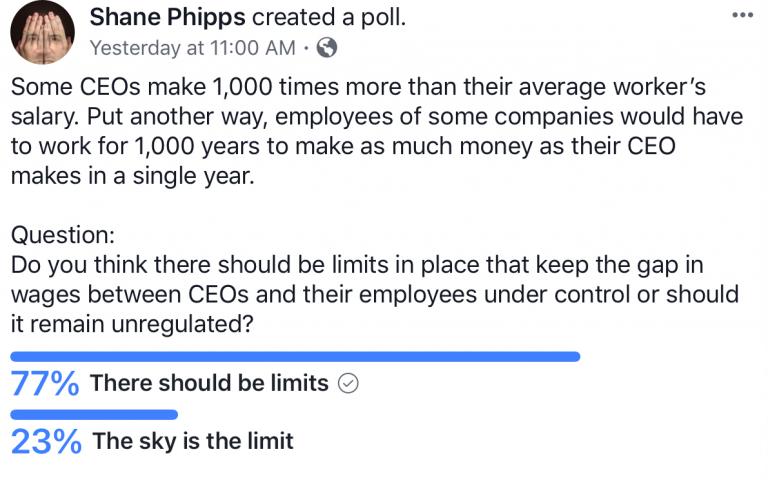 For the most part, the results followed political lines. The majority of the responders that I know well enough to have an idea where they stand politically voted as I would have expected with a couple exceptions. What I found most interesting was the comment thread that developed in response to this poll. I had some very good exchanges with some friends who pushed back a little about the premise of my question. It was all quite respectful and I found it to be stimulating conversation. I was encouraged by one revelation that came from that dialogue. Even among some of those who voted “the sky is the limit”, there were concessions made that there is a problem with the wage gap, they were just wary of how to solve that problem. That I could completely understand. I can see how it could make someone nervous to think of the government regulating how citizens are compensated for their work. But then, as one of my fellow teacher friends pointed out, the government already regulates our salaries.

Education is a different animal. We don’t have the incredible wage gaps between our leadership and our rank and file workers. In a typical school district, the CEO (superintendent) makes a salary in the range of 3 to 4 times more than their average employee. That wage gap doesn’t bother me a bit. It is reasonable. The question becomes, then, were does the line of reasonable wage gaps begin and end? Is it reasonable for a CEO to make 10 times what their average employee makes? Perhaps. What about 20 times–50 times–100 times–what about 10 times 100 times? This question gets to the crux of the issue.

Income inequality is a big problem and, by all measures, it is getting worse.

In the interest of full disclosure and to avoid plagiarizing myself, I am about to re-use some data  and information that I shared in a previous article that can be found here.

Estimates vary, but according to President Obama’s 2014 State of the Union Address, America’s wealthiest 1% control 40% of our nation’s wealth. The bottom 80% control only 7%. Those numbers are astounding. The fact that a high percentage of that bottom 80% were instrumental in getting Donald Trump elected is no less astounding–particularly since President Trump’s proposed policies only figure to widen income inequality.

Here are some more numbers to chew. There are approximately 124 million households in the United States. If wealth were divided equally among them, each household would have a net worth of around $760,000. Yet, in reality, the bottom half of U.S. households, 62 million of them, have an average net worth of $11,000–that’s an average of the bottom half, which means, of course, that millions of those households are worth much less than $11,000.

Many of you reading this are probably like me, somewhere above that bottom half, but not even within sniffing distance of the 1 percenters. I am a teacher by trade. I have a master’s degree and have taught for 17 years. My wife is a college graduate and a 25 year veteran professional in the health care field. We both make a modest but comfortable living. Combining our incomes puts us into the class with the wealthiest 20% of American households. While we have comfortable lives, the thought that we are better off than more than 80% of American households is hard for me to wrap my mind around. I wonder how families down in the statistical categories well below the 50th percentile manage to get by. I cringe to think of the drug and crime infested areas in which they are forced to live–of their struggles to get health insurance–of their search for their next meal–of their strained relationships with law enforcement…

So when I see those teachers in the streets demonstrating for higher wages and better conditions–and they aren’t just demonstrating for their own interests, but for the interests of their students as well, for we can see how this affects them all too clearly–these are the things I think about.

As a student and teacher of history, I also think about how the American Dream has always been an uphill struggle. How Americans have always wanted to trust the capitalist system, but the system always seems to default to greed and corruption, ending with a few haves and a mass of have-nots. I also think about those brave souls who stood up in the face of all of that greed and corruption to make a difference.

Mary Harris “Mother” Jones wasn’t even born an American but, in many ways, she is the perfect symbol of what a true American was and is. She was born in Ireland but fled there with her immigrant parents during the potato famine in the 1830s. Mother Jones’ time as a young immigrant was rife with struggle and tragedy. She lost her husband and her children to Yellow Fever while living in Memphis in 1867. In the wake of that unimaginable tragedy, she moved to Chicago and found work as a dress maker. Just as she was putting her life back together, Mother Jones lost her home and her possessions in the Great Chicago Fire of 1871.

The deck was already stacked against Mother Jones in many ways–as a woman in a time when womens’ rights lagged so far behind–as an Irish immigrant in a time when discrimination against the Irish in America was rampant and simply awful–and one tragic blow after another seemed to rain down upon her to add injury to insult. And yet, as they say, she persisted.

Bouncing back from the steady blows of life, Mother Jones found her calling as a labor activist. She devoted the rest of her life to help organize labor unions, most famously in the coal mining industry. She saw that the American Dream was still alive but that it had been taken hostage by greed. She worked tirelessly to help close the gap between the haves and the have nots. She saw that, allowed to run amok, capitalism is no better than any other flawed economic model.

In many ways, Mother Jones embodied the story of America.

We want to believe that our system can and will correct itself. But we see time and again that, left unchecked, greed and corruption will always blot out the American Dream for the majority of Americans.

In the end, We the People must be the stewards of the American Dream.

So what is the answer?

I don’t know the answer, but I think a good place to start is to ask the question; Are we comfortable with a system where the head of a company can make 1,ooo times more than the average employee? Does the idea that an average worker would have to work for 1,000 years to make what his CEO makes in one year bother us?

I posted a second poll on Facebook to get to the core of this from a different angle. The results were both encouraging and perplexing.

It is interesting that, when I spun the scenario around to make it personal, nobody was willing to claim to be greedy enough to accept a salary 1,000 times higher than their average employee.

So where is the acceptable line for a wage gap between the top and bottom within a company?

What if we searched for that line and actually made it happen?

I’d love to hear what you have to say about it in the comments.

April 10, 2018 When the need to be better than someone is stronger than the call to love them
Recent Comments
0 | Leave a Comment
Browse Our Archives
Follow Us!