Donald Trump and the New Crusades

It’s starting to become clear. The seemingly bewildering nature of the continued support of the Evangelical Right for the loony Trump administration is starting to make sense. They are hastening the End Times and spoiling for a fight. It doesn’t make it any less frightening, but at least I can understand it now.

I didn’t jump right on the pile when the news broke about the Trump ordered assassination of General Soleimani. I remained silent for a few days because I wanted the dust to settle so that I could speak to facts and not out of a knee-jerk emotional reaction. I am still waiting for more facts but I do believe the question of why Iranian General Soleimani was in Iraq in the first place has been answered sufficiently. According to reports from the BBC, the general was invited to to Iraq to help in the discussions of de-escalation of hostilities between Iran and Saudi Arabia.

The details regarding the logistics of the Trump ordered attack on Soleimani–the questions as to how much validity to give to Trump’s claims that Soleimani had imminent plans for terrorist attacks that could have potentially killed many Americans–remain a hotly debated mystery shrouded by the fog of potential war. I’m not going to dwell on speculation on the particulars of this still breaking story. I will just say this, the timing of the assassination seems very suspect. Perhaps Soleimani was a bad man who is responsible for the deaths of thousands, but why him and why now? Certainly, Trump’s puppet master, Vladimir Putin is responsible for far worse atrocities than Soleimani, but Trump cozies up to Putin like a lap dog.

Though I feel the jury is still out on the Soleimani assassination, I’m not too hesitant to speculate on the bigger picture. I think we are seeing many of the last pieces of the master plan of the leadership of Evangelical Right falling into place. I’ve long suspected and written that their support of Trump is based on their desire to bring on the End Times prophesied in Revelations. This plan has been in place for many decades (watch the Netflix documentary called The Family if you doubt me). Up to this point, it has been highly secretive and clandestine with only the occasional scandal arising here and there to shed some light on it before it slithered back underground. But now we have the Trump family at the helm. They are far too egotistical and bawdy to keep the end game hidden. They let the cat out of the bag whenever they take to social media. Trump has been boldly defying long-standing international treaties by making open threats against 52 specific targets he’ll destroy if Iran retaliates. Many of these targets are of great cultural, historical, and religious importance. Since 1954, the United States has been bound by the agreement in the Hague Convention on Protection of Cultural Property in the Event of Armed Conflict, which specifically forbids the targeting of culturally important sites as a tactic of war. When confronted with this fact, Trump did what he always does, he doubled down and dug his heals in, saying it was within his power. Law be damned–just like countless other examples in his past.

This brash and bodacious tendency to show one’s cards also seems to have spread to Trump’s son, Donald Jr. A recent photo of Don Jr. cradling a semi-automatic rifle with a big smile on his face surfaced on social media this week. In case you missed it, here is that photo. 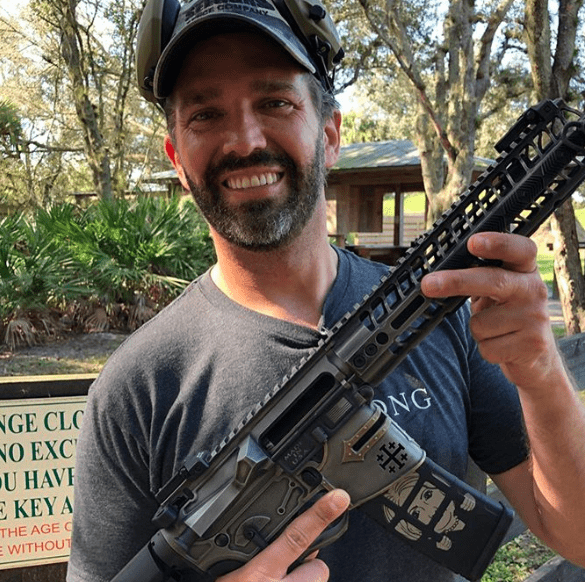 The rifle in question is adorned with some significant imagery. Most noticeable is the image of Hillary Clinton behind bars which is emblazoned on the ammunition magazine. They just can’t get that woman–who soundly defeated Trump in the general election–out of their heads. That image is just childish and pathetic. It’s the other less obvious image that has a much more sinister message. The icon just above the Hillary image is a large cross with four smaller crosses within it. It is called the Jerusalem Cross or, more commonly, the Crusaders’ Cross. That emblem was used by the Christian Crusaders as they invaded the Holy Land during the Crusades. More recently, it’s been adopted by white supremacy groups. It is clear that Don Jr. is proudly sending a message about the agenda of his father’s administration and the agenda supported by the leadership of the Evangelical Right.

They want a fight and, God help us, it looks like they are likely going to get one.

While I doubt that the majority of the run-of-the-mill Evangelical Right private citizens are totally aware of just how deeply their leadership is involved in this or just how long this has been in the works, that notion does little to comfort me. They just blindly buy in lock, stock, and barrel to the news they are told to watch and the propaganda their leaders feed them.

History is full of sheep that were led to slaughter.

January 5, 2020
Christian Trump Supporter, Are You Unaware of How Trump is Playing You or Do You Just Not Care?
Next Post