Native Appropriations‘s Facebook page posted a link to this Death and Taxes article:

I have always said that Free People reminds me of a ’90s era hippie shop of the sort that sold a lot of broomstick skirts, incense and tarot cards– except, you know, 10 times more expensive. Now, it seems, they’re really leaning into that with the concept of an online “Spirituality Shop.” Which may not be new, I don’t know, it’s not like I’m keeping tabs on the Free People website or anything. But it sells a lot of crystals and dreamcatchers and tarot cards and pretty much all the sticks you can handle.

But yeah. It is a “Spirituality Shop.” From Free People. Let that roll around in your mind for a minute before we start in on this vision quest.

Click through to see some of the items for sale. They are…remarkable. My jaw hurts from dropping so much! My favorite items are the $68 hanging crystals that you could make yourself for about 10 bucks and an E-How video on macramé.

It’s easy to just snark at this for a minute and then congratulate ourselves on how authentic our own spirituality is, but I think it’s worth discussing the ways artisanship gets mixed up in capitalist cynicism and mass production. Most of the Free People stuff is purportedly made–or at least designed–by an artist named Catherine Costanza, although much of it is variations on Indigenous art and spiritual tools. The “cosmic stick” and paulo santo clusters with amethyst tacked on (do customers know you have to take the crystal off to burn the wood?) are pretty ridiculous, but some of the items–the moon chime things, the aforementioned hanging crystals–are actually kind of nice-looking. As in, if I picked one up from a flea market, it would liven up a room.

1. It’s interesting when an artisan, whether or not they’re selling through a larger company, feels empowered to charge farcical amounts of money for objects one could cheaply and easily make themselves. On the one hand, the artisan deserves credit and compensation for a solid concept and good craftsmanship, and if their work is valued, they should be able to make a living off of it. On the other hand, these kinds of prices are only viable in a system in which people feel powerless to make things themselves and/or want the status associated with buying a particular brand. (Then there’s fast fashion, which is the new underbelly of status, but that’s a whole other post.)

2. Artisans aren’t always noble homegrown folk who just love making beautiful things. They can be charlatans peddling snake oil. They can be just as cynical as huge corporations. I’ve never met Catherine Costanza so I’m not going to make guesses about her intentions, but it’s good to remember that “handmade” does not equal “honest.”

True story: once I saw an artist, in a pop-up shop curated by a major museum, selling little scraps of handmade paper with letter-pressed dotted lines on them for–wait for it–$95 each. Because they were art, you puny mortals. The only conclusion I could draw that would keep my mind in one piece was that the shop itself was performance art.

3. The appropriation of spirituality is running amok, as usual. I doubt the majority of people buying the Free People crap actually intend to use it for magic or cleansing or healing or whatnot; they want it because Witchcraft and Shamanism and All Things Native American are in vogue right now. The aesthetic is cool; the lifestyle is not. Case in point: about a year ago, Bust Magazine published an article by Callie Watts about her efforts to become a “real witch.” She made an athame out of a letter opener (legitimately cool) and led a few rituals. At the end of the article, she proclaimed herself a Witch; however, she also rushed to assure her readers that she didn’t actually believe in goddesses or magic or anything like that.

4. Even when things are pretty, even when they’re useful in our magic, we need to own fewer things. Period. A personal collection of meaningful objects is fine; roomfuls of trendy dust catchers are not. A small handful of crystals is probably okay; people have been using beautiful stones for millenia. But we can’t tear apart ancient caves just so everyone can play shaman for two months and get bored.

About a year ago, I found a beech twig lying on the ground beside its tree. I asked the tree if I could have it, thanked it, tied some ribbon around the twig, and consecrated it. Behold: my current wand. It’s much more beautiful and dear to me than anything I could buy in a store. Someday it’ll likely break or get worn out, or maybe I’ll pass it on in a power object exchange. Knowing my time with it is finite only makes it more special.

I am so very glad I didn’t pay the price of a flight to Oakland for it. 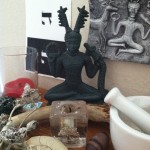