Would You Catcall the Morrigan?

Would You Catcall the Morrigan? November 20, 2014 Asa West 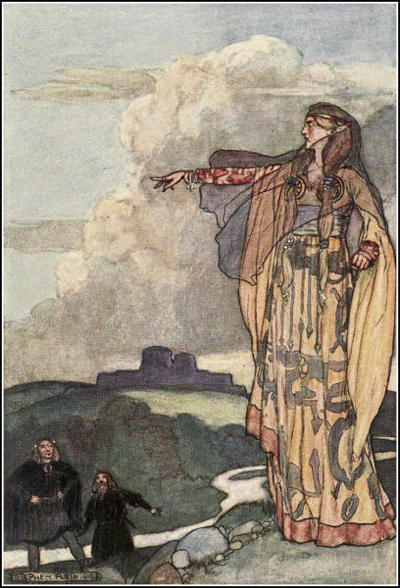 ETA: When I scheduled this post, I didn’t think about the date and inadvertently scheduled it for the Transgender Day of Remembrance. Please remember and honor trans folk when you think about rape culture.

The Morrigan is walking down the street in all her splendor. You see her and stand up. “Good morning,” you call.

Finally, you give up. “STUPID C*NT!” you yell. Her demeanor makes you angry. You were just being friendly!

If you found the above scenario unspeakably blasphemous…yet you think it’s okay to demand women’s attention on the street, then read on, my friend!

Lately there’s been a lot of discussion about catcalling. You’ll probably recognize this video that began circulating a few weeks ago:

Unfortunately, it was later revealed that white men were edited out of the video, leaving viewers with the impression that Black and Latino men are the primary culprits in street harassment. Fortunately, there’s plenty of incisive media dealing with this. See, for example, Jessica Williams’s Feminized Atmosphere:

Or this video by Collier Meyerson of Jezebel, highlighting the experiences of women of color (sorry, couldn’t get the video to embed, but it’s worth the click-through, and the comments contain some vital stories).

Because of my identity, I haven’t been subjected to many of the utterly vile comments that are directed at women of color, women of size, trans women, and other marginalized groups, but I have been harassed countless times. About a year ago, while I was riding the bus home from work, a man behind me talked loudly to his friend for much of the ride about how cute I was, commenting on my hair and clothes (loose jeans and a winter coat, for the “but what was she wearing!?” crowd). When it became clear that I wasn’t going to respond, he mused to his friend that he could snap me in half if he wanted.

Take note of that juxtaposition of sex and violence, please. It’s not a coincidence.

One of the most incredible forms of harassment I receive is the command to smile. A facial expression that would look neutral or thoughtful or intelligent on someone who presents as male is often interpreted as “bitchy” on someone who presents as female, because women aren’t supposed to have thoughts in our heads. Once a man told me to smile while I was in the middle of wrestling with a stubborn bike lock. Try, for a moment, to picture someone yanking a bike key out of a lock with a beatific smile on their face. A little unlikely, no?

If you’ve been following the catcalling discussions, you’ve no doubt seen (or partaken in) the incredible contortions of logic that men use to justify harassment. “I’m just being friendly.” “It’s a compliment.” “I want to do it; therefore she is obligated to enjoy it.” “You mean I’m not allowed to say hello!?” The hashtag #dudesgreetingdudes highlights this absurdity by imagining men treating other men the way they treat women. Why, for example, have I never in my life seen a man tell another man to smile?

The simple fact is this: catcalling is part of rape culture, and street harassment is a form of violence. Sex and violence have been linked in our culture for a long time. I’m not talking so much about the power with model of the Morrigan offering a sexual partnership to CuChulainn in the tradition of kings marrying the land (although I think there’s some stuff we could unpack); I’m talking more about the power over model of dominating women, of rape as a weapon. Even in the countries furthest removed from what the mainstream considers “war,” the street is a battlefield for women.

I’m writing this post for a specific audience: men who don’t like rape culture, who don’t relish the thought of women feeling threatened, but don’t see why it’s such a big deal to say hello to a woman you see on the street.

In Kali: The Black Goddess of Dakshineswar, Elizabeth U. Harding describes Sri Ramakrishna’s view of Kali as embodied in the world:

He saw Kali in all women.

[He] said to his disciples, “My children, for me it is actually as if Mother has covered Herself with wrappers of various kinds, assumed various forms and is peeping from within them all….”

That idea continues to resonate with me, and my practice has encouraged me to see the Morrigan in every woman. My friends. My coworkers. My daughter. My mother. I feel very deeply that everyone, of every gender, has Morrigan-nature inside of them. We are all as bountiful as Anu; we are all as fierce as Badb. We all embody sovereignty in our communities and ourselves. Every one of us.

So, if you like to “compliment” random women on the street, or if you perceive a “no” as a “chase me!,” or if you think women owe you the response you want because of your good intentions, then here’s an experiment I’d like you to try. When you see a woman on the street and you feel the urge to say something to her–even if it’s just “good morning”–then imagine you’re speaking to the Morrigan. Do you still feel confident saying what you want to say, in the way you want to say it, for the reason you want to say it?

How would the Morrigan react, do you think, if you told her she’d be prettier if she smiled? If you accused her of being oversensitive for not enjoying your attention?

Better yet, spend a day–or even just an hour–seeing the Morrigan in every woman you meet. How do your interactions with women change? Your perceptions of us?

We don’t diminish the Divine by making mistakes in ritual or prayer. We diminish it by diminishing each other. May your Morrigan-nature be awakened and blessed.

Comment policy note: if the comment thread gets out of control, then all pro-catcalling comments will be changed to chicken noises. I mean it. Don’t make me do it. 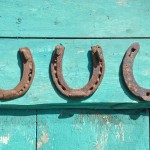 November 18, 2014
Spirituality Versus Superstition (Or: What If We're Making It All Up?)
Next Post 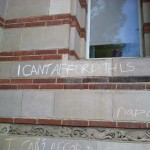 November 25, 2014 Tuition Hikes, Ferguson, Witchcraft, and Thanksgiving
Recent Comments
0 | Leave a Comment
"hi everyone-- happy to share that the deck is now available! 150 decks were printed ..."
Ori A New Queer Jewitch Tarot Deck: ..."
"To read your article was such a relief, just to see that I'm not alone ..."
littleforestwitch Don’t Listen to Your Gut: Practicing ..."
"I still can't find the like button on articles so here have a <3"
Critter (they) Priestessing Depression: Why are Pagans So ..."
"This is very beautiful! I haven't been to Iceland yet, but have always felt drawn ..."
Trellia A Witch in Iceland (Part 1: ..."
Browse Our Archives
get the latest from
Pagan
Sign up for our newsletter
POPULAR AT PATHEOS Pagan
1