Boy, these last couple of weeks have been a doozy. I’ve been drafting this post for days and every time I open it, there’s more to say.

I’ll assume you haven’t spent the day in a diving bell at the bottom of the ocean with cotton in your ears, and you heard about the grand jury’s decision? What more can I say?

Somewhat obscured by the Ferguson news is the news that Marissa Alexander, the woman who fired a warning shot at her abusive husband and faced 60 years in prison after unsuccessfully invoking Florida’s “Stand Your Ground” law, just pled guilty to all three counts of aggravated assault. The good news: she finally gets to go home in January, even though she’ll be on house arrest for two years. The bad news: every single other thing about the American justice system.

Meanwhile, here in California, the UC Regents voted in yet another tuition increase, which means that by 2019, tuition for the University of California will be around $15,500 a year. They say that’s the cap, not the goal, and tuition may not actually get that high if the state chips in more funding, but nothing in the recent history of the UC or the state of California lends any credence to that theory. The regents are also talking about exceptions to the increases–don’t worry, they say, this or that kind of student won’t be affected–but I can tell you from personal experience that many more students will be slammed with tuition hikes than the rhetoric implies.

The outpouring of student protests here on my campus brings tears to my eyes. I am so damn proud of these students. There have been marches and walk-outs from San Diego to San Francisco, and every day, new graffiti appears on the library walls: 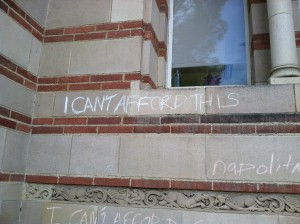 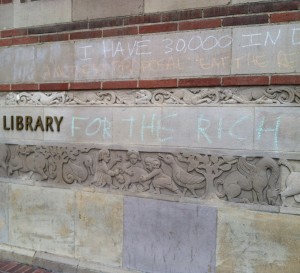 Today the students are holding a rally to address Michael Brown’s murder; as I write this, shouts of “No justice, no peace!” are echoing through my office window. Here’s a planter near the rally: 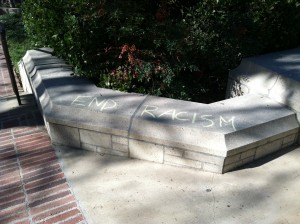 And, to go back to the tuition hikes, here’s a picture from another campus:

Finally, on a personal note, this has been the final week of Open Enrollment, also known as National All-Your-Premiums-Are-Increasing Month. Our cost of living increases but our pay doesn’t. We receive no paid parental leave at all; my best option is buying insurance through my job that pays a portion of my salary for six weeks after I use up my sick time. (Last time I gave birth, I was still bleeding at six weeks.) If my husband and I decide not to have another child, it’ll be because between rent and unpaid leave and daycare costs and college tuition and the likelihood of caring for at least one aging parent, we won’t be able to afford it. With a librarian and a lecturer’s salaries, working at a public university, in one of the most expensive cities in the US…it’s really hard to make it work.

Of course, what with climate change, perhaps it’s better to have only one child. It’s almost December and it’s still too hot to plant my lettuce. So that’s a person who may never exist. Just one more casualty in Capitalism and Patriarchy’s race towards death.

Yet I hear the students chanting outside my window, and I find I have no choice but to hope.

A few interesting things have happened alongside all the bad news. Ursula K. Le Guin said this about Capitalism:

We live in capitalism. Its power seems inescapable. So did the divine right of kings. Any human power can be resisted and changed by human beings. Resistance and change often begin in art, and very often in our art—the art of words.

And The Hunger Games has struck a chord with oppressed people all over the world:

It’s been two decades since I last lived in a car, but my mother has found herself there again. I’d take a guess and say that it’s rare that students spend their days thinking about where their teachers sleep at night, but in the case of a handful of vocational students in the Pacific Northwest, the answer is on two thin twin mattresses in the back of a van, nestled in a rest stop off the I-5.

For many of us, The Hunger Games is personal, not only because we love the writing or the heroine, but because we live under Capitol-like policies ourselves. We live in a culture defined by class divisions, and by an unwillingness to talk honestly, let alone remedy, those divisions.

In Apocalyptic Witchcraft, Peter Grey refers to movements like Anonymous and Occupy Wall Street as forms of Witchcraft. I think he’s exactly right. To me, Witchcraft is about touching the undercurrents that shape our reality and redirecting their flow. Right now, our reality flows towards oppression, hopelessness, and death. Can we redirect it towards liberation and life?

Can we work magic that big?

I think it’s significant that this is all happening on the week of Thanksgiving–a racist, colonialist holiday in itself, but one predicated on being grateful for what we have.

Last week, I was writing when I started to hear a pattering sound. For a good ten minutes I ignored it–I’m so inured to the drought that I couldn’t believe the sound might be rain, and even the part of me that did wonder didn’t want to look and have my hopes dashed.

But then it got louder and I had to look. Sure enough, it was raining. I ran outside and let it fall on me and laughed and sang praises to every deity and ancestor and spirit I could think of. The rain ended after about twenty minutes total, and afterwards I felt both grateful and angry. I felt grateful because the rain was a moment I could hold onto when the drought took hold again. I was angry because my garden deserves so much more.

Let our anger be the magic that changes the currents of the world. 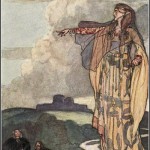 November 30, 2014 Self-Promotion Sunday!
Recent Comments
0 | Leave a Comment
"hi everyone-- happy to share that the deck is now available! 150 decks were printed ..."
Ori A New Queer Jewitch Tarot Deck: ..."
"To read your article was such a relief, just to see that I'm not alone ..."
littleforestwitch Don’t Listen to Your Gut: Practicing ..."
"I still can't find the like button on articles so here have a <3"
Critter (they) Priestessing Depression: Why are Pagans So ..."
"This is very beautiful! I haven't been to Iceland yet, but have always felt drawn ..."
Trellia (she/her) A Witch in Iceland (Part 1: ..."
Browse Our Archives
Related posts from Shekhinah Calling