Nature is for the Rich

A few years ago, some of my husband’s relatives bought some land in Northern California and built themselves a house. The house is eco-friendly, with walls that apparently store heat from the sun. It’s also huge. Really it’s a mansion. They equipped it with a sprawling garden and an archery range and a treehouse. The mother in the family found animal skeletons all over the property, and turned many of them into gruesome, beautiful works of art.

They’re very sweet, lovely people, of course. I always look forward to seeing them. But I remember the day I found out they hadn’t moved to the country. This giant house–this was their weekend home. They spent most of their time in the city.

My husband’s extended family spends a lot of Thanksgivings and Christmases up there these days, and this year, he and I drove up to stay over Friday night. As weird as I feel in that house, surrounded by all the excess it signifies, I love the land it’s on. This year, as the rest of the roughly 20 family members staying there worked on jigsaw puzzles or sipped coffee on the porch, I left my daughter with her grandparents and crept out onto the little trails that crisscross the land. Within a few minutes, the sounds of conversation ceased. I sighed, felt myself relax. I was alone in the woods. There was no place I’d rather be.

I’d never gone out by myself before–only on group walks with the family. It was especially beautiful on this particular Saturday morning, overcast and silent and teetering on the verge of rain. All my life I’ve had a persistent image of myself in a forest under a cloudy autumn sky–a past life? A genetic memory?–and as I walked, the recognition hit me so hard I gasped. Something very important had happened to me in a forest exactly like this one.

I’ll probably never know exactly when or where. But those woods stirred something in my DNA.

I walked through the almost-rain, so in love with the land I could cry. I said hello to Cernunnos and Anu. I said hello to the Fey. I wished I’d brought an offering. At one point I heard something big crash down behind me, but when I backtracked to take a peek, there was nothing there.

Later that day, we went to have lunch at the farm where one relative–we’ll call her Farmer Gal–works. It’s a similar setup: gorgeous house built by wealthy owners, gardens and walkways that Martha Stewart would swoon over. They have a giant outdoor kitchen and dining table. Their situation is the converse of my relatives’: they tend the farm during the week and spend the weekends in their city home.

But here’s a strange thing (as if the lives of the rich weren’t strange enough). Despite the money they poured into their own house, despite the wealth Farmer Gal creates for them, the best housing they can give her is a tent cabin with an outdoor shower and toilet. She walks across the fields to their outdoor kitchen to prepare meals. It seems like the middle class nature lover’s dream, until you think about going outside to pee and shower and cook when it’s 40 degrees out.

She does get to eat the crops. And at least they gave her a trailer for the winter. But even the trailer is about the size of my bedroom.

I wondered out loud to my husband and another relative–we’ll call her City Gal–if Farmer Gal felt okay about her living arrangements. “Are they paying her enough,” I asked, “for her to move into a regular apartment if she wanted?”

City Gal’s response was swift. “Just because people have money doesn’t mean they’re obligated to give it to everyone who comes their way,” she said. “If you want to become a farmer, then you’re committing yourself to being poor.”

Translation: I am okay with the people who produce the food that keeps me alive living in poverty. Because if Farmer Gal is an assistant farm manager with formal training in organic farming methods and she’s “committed to being poor,” then what are the laborers making?

After lunch we all went for a walk by the river. Farmer Gal showed us a walnut grove that had been planted by Pomo Indians. “Do your employers own all this land, too?” I asked. She said yes. Boggle boggle boggle went my mind.

A few years ago, blogger Brownfemipower tried to find some images of people of color in nature. She found plenty of photos of white people enjoying beaches and forests and meadows and whatnot…but no people of color. Or, well, there was one picture of a Latina in a sexy outfit, but she was clearly there for the viewer’s pleasure, not her own. The message the overculture was sending was pretty clear.

Okay, okay, you’re saying. So rich people own a lot of land. I get it. But that’s why we have national parks! It’s not like you only have access to nature if you’re rich!

Of course. Lots of people go camping. Except…why is it that, whenever I go to a regional park, most of the people on the trails are visibly upper class? Could it be that access isn’t just about physical availability? Could it be that, in order to enjoy nature, one must also have resources like time and energy and transportation, which is pretty tough when you’re working 2 or 3 starvation-wage jobs?

Well, maybe in the city, you might say. But what about low-income people who live in rural places? Not every region is as shi shi as the California coast.

Sure, people of various incomes have access to land. But what do you think happens the moment–the instant–a developer takes a liking to that land? Or someone wants to built a highway or start fracking? Or a factory has some toxic runoff to get rid of? That land is on loan from those with more wealth, and they don’t hesitate for a second to take it back.

Nature is for the rich. This is a fundamental belief of Capitalism. If you are rich, then you are entitled to natural beauty and spiritual morning walks. If you are not rich, then nature is a magnanimous gift the rich can bestow upon you when they feel like it.

“Can all the farm employees come to the river?” I asked Farmer Gal.

“Oh, of course,” she said. “One guy brought his whole family.”

I felt a cold sort of relief.

On my relatives’ land, in that startlingly familiar forest, I wondered if the Fey knew that the untouched portions of the property were “owned.” Could they even make sense of such a concept? Would they laugh at me if I told them?

In my past-life memory or ancestor’s memory or whatever it was, I was definitely a resident of the forest, not the owner of it. I’m certain of this. 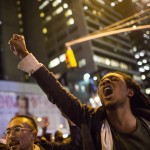 December 6, 2014 Killing Magic, Healing Magic
Recent Comments
0 | Leave a Comment
Browse Our Archives
get the latest from
Pagan
Sign up for our newsletter
POPULAR AT PATHEOS Pagan
1