So, you all know that I’m a super fancy world-class witch, but did you know I’m also a YA aficionado? It’s true! Don’t get me wrong, I do love a good adult literary read, but as more and more writers try out the YA market, the genre has exploded with some amazing storytelling. The bildungsroman really speaks to people, even if their teenage years are decades behind them.

Plus, YA novels are a lot cheaper than adult novels–$18 for a hardback and $10 for a paperback. It makes some of those bookstore deliberations a lot easier, especially when the author photo on the adult novel is some stubbly pretentious dude french-kissing a cigarette. (See also Guy in Your MFA, which basically sums up my MFA.)

So, here are 5 YA novels that deal specifically with Witchcraft and/or Pagan themes. These aren’t necessarily my favorite YA books ever, but they do shed a light on my practice in playful, enjoyable ways.

The Witch’s Boy by Kelly Barnhill

Okay, technically this is a middle grade novel, but the writing is as sophisticated as anything for adults. The story centers on a boy and girl who have to work together to prevent their neighboring kingdoms from going to war. Áine is the daughter of the Bandit King, and Ned is the son of a woman tasked with protecting an ancient magic–a woman known only as Sister Witch.

The story is wonderful, the character arcs are moving, and the prose is elegantly crafted, but from a Witchcraft perspective, what I really loved was Sister Witch’s relationship with her magic. When she needs to use it for healing, she approaches it as a humble supplicant…but when it misbehaves, she isn’t afraid to regulate. It’s an intriguing push-and-pull that mirrors my own magical work: when I ask a deity or spirit for help, I do so with utmost respect, but if that deity or spirit gets any funny ideas, I know when to say “CUT IT OUT!” I find that the deities I work with prefer a practitioner who stands up for herself, and it was interesting to see that dynamic play out in a fantasy novel.

Also, Áine’s name is one of the guises of the Morrigan. How can you go wrong?

Chime by Franny Billingsly and Shadowfell by Juliet Marillier

Here are two novels that deal with young women who can see the Fey–an ability that, in both stories, is punishable by death. Chime takes place at the turn of the 20th century, in an English village on the edge of a swamp teaming with Faeries. Seeing the Fey is a sign of witchcraft, and anyone suspected of witchcraft is hanged, so Briony, the novel’s protagonist, keeps her secret ability tightly under wraps. The one exception to the rule is the Chime Child, who, by virtue of being born at midnight, can see the Fey but is not a witch, and uses that sight to protect the human world from witchcraft.

The novel sets up a dichotomy common in indigenous cultures throughout the world: the sanctioned magic practitioner (shaman, medicine man, cunning woman, whatever you want to call it) and the unsanctioned, malicious magic practitioner (witch, witch, witch, and occasionally witch). Briony, having been told she’s the latter type, feels an intense amount of shame and self-hatred regarding her ability, even when she uses it to save her sister’s life. In acting as a liaison between the Otherworld and the human world, though, Briony comes into her own as a shaman-like figure. It’s a moving and gratifying transformation, even if the twist at the end is eye-bleedingly obvious.

It’s a shame that Chime never challenges the pejorative use of the word “witch.” However, Juliet Marillier, the author of Shadowfell, is a Druid in OBOD, and her novels demonstrate a higher level of sensitivity to modern Paganism. Shadowfell takes place in Alban, a kingdom that has fallen under the rule of a brutally oppressive king. Communicating with the “Good Folk” hasn’t always been a crime, but under King Keldec’s rule, anyone who engages with the Fey is labeled “smirched” and severely punished. One of the most chilling punishments is “mindscraping,” the magical equivalent of a Hollywood-style lobotomy. The main character, Neryn, is haunted by the memory of her grandmother’s mindscraping, and she has to hide her ability to see the Good Folk until she can reach Shadowfell, a community of rebels trying to overthrow the king.

Shadowfell is the first in a series. I haven’t gotten my hands on Book 2 yet, but I’m eying it!

If you think Witch Wars in the blogosphere are bad, try surviving an ancient feud between witches and magicians bent on annihilating each other. On one side of the mountainous border between their territories, the witches live in covens dedicated to protecting their people by throwing the bones to see the future. Their devotionals to the Goddess consist of silent, yoga-like movements, and they follow the twin prophets Aata and Aayse. On the other side of the border, the Baen people practice magic by singing specific tones and melodies, using hidden “echo spots” to amplify their magic by harmonizing with their own echoes. The complex mythology and deep, lush worldbuilding in this novel absolutely blew me away. Like the main character’s younger sister, I wanted to go join the witches in their huts in the mountains, don their costumes of quilted red tunics, and learn to throw the bones. Alas, my Tarot decks and yoga classes will have to suffice.

Call Me Isis: Egyptian Goddess of Magic by Gretchen Maurer

This one’s another middle-grade novel, and I’ll confess–the writing wasn’t great and it didn’t hold my interest. However! I’d recommend it to anyone raising children in Pagan traditions, particularly if you yourself work with Isis. The story is a retelling of her resurrection of Osiris, and the historical section at the end helpfully specifies which parts come from the mythology and which parts were added by the author. The reason I include it in this list is that the author concludes her section on Isis worship through the ages with a brief description of modern Pagan practices. It’s always thrilling when a mainstream author knows Pagans exist, let alone knows enough about us to describe us intelligently, and seeing our traditions presented in the same continuum as ancient priesthoods is a fantastic way for our kids to internalize the message that our way of life is legitimate.

Call Me Isis is part of the “Treasury of Glorious Goddesses,” a series that also includes Call Me Athena and Call Me Ixchel. 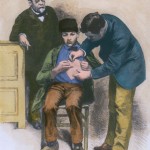 January 30, 2015 Please Vaccinate Your Children
Recent Comments
0 | Leave a Comment
"hi everyone-- happy to share that the deck is now available! 150 decks were printed ..."
Ori A New Queer Jewitch Tarot Deck: ..."
"To read your article was such a relief, just to see that I'm not alone ..."
littleforestwitch Don’t Listen to Your Gut: Practicing ..."
"I still can't find the like button on articles so here have a <3"
Critter (they) Priestessing Depression: Why are Pagans So ..."
"This is very beautiful! I haven't been to Iceland yet, but have always felt drawn ..."
Trellia A Witch in Iceland (Part 1: ..."
Browse Our Archives
get the latest from
Pagan
Sign up for our newsletter
POPULAR AT PATHEOS Pagan
1

What is Animism: Finding the Spirit of All...
What is animism in a modern context and why is it so...
view all Pagan blogs
What Are Your Thoughts?leave a comment
Copyright 2008-2021, Patheos. All rights reserved.