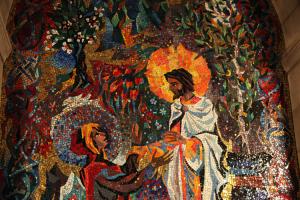 Post-Resurrection, Jesus shows up in some unexpected ways. He takes a stroll with his disciples on the path to Emmaus. He appears to Mary Magdalene as a gardener. In this week’s Gospel, Jesus arrives at the Sea of Tiberias, helps his disciples catch some fish, and eats an early morning breakfast with them.

We’re supposed to notice several things here: first, Jesus’s miraculous aid in the disciples’ capacity to catch fish, which had been eluding the group until Jesus got there; next, the fact of Jesus’s eating—ghosts don’t eat, so this indicates a truly enfleshed Resurrection; and finally, Jesus’s call to Peter to “feed his sheep,” underscoring both Peter’s special vocation as leader in the Church, and the universal call to serve.

These are undoubtedly the theologically rich elements of the text. But today, I notice something different, and it catches me off guard. This is a Gospel written by John, but it’s largely about the intimate relationship between Jesus and Peter. John refers to himself, as usual, as “the disciple whom Jesus loved.” I’m reminded of the Last Supper, where John nestles into Jesus’s chest, or John at the foot of the cross, being given as a gift to Mary, Jesus’s own mother. It seems safe to say that in the scheme of things, John could be called (anachronistically, sure) Jesus’s BFF.

But what does that mean? Did (or more unsettlingly, does) Jesus have favorites? I find myself heating up in jealousy at the very thought. But he was/is a person, even as he is part of the Godhead.

Did it irk John to notice Jesus’s intimate conversation with Peter, recorded in this Gospel? After breakfast, Jesus seems to take Peter aside, away from the crowd and all his other friends. I can see Jesus looking deeply into Peter’s eyes, maybe placing a firm, gentle hand on Peter’s shoulder, asking, “Peter, do you love me?”

And by the way, what kind of a question is that? The conversation turns into a commission—Jesus is giving Peter serious work to do, “feeding his sheep,” leading Peter to acceptance of his own cross. But the question isn’t, “Peter, do you wish to honor God?” or “Peter, are you ready to do the work to build up the Kingdom of heaven?” It’s the supremely intimate, person-to-person moment of reckoning: “Do you love me?” And Jesus poses it three times!

I mean, seriously, we’re all taught God loves us, Jesus loves us. But just picture this scene for a moment. Your friend, with whom you have this incredibly complicated and vulnerable relationship, takes you aside, and asks you over and over again, “Do you love me?” What kind of feels are happening there?

And we know John gets a little jealous about the relationship between Jesus and Peter, right? I mean, he throws an occasional petty aside into his Scripture accounts. We know John beat Peter in the race to the tomb; we know, thanks to John, that Peter had to “tuck in his garments, because he was lightly clad,” at the sight of Jesus in this scene. John notices an awful lot of details about Peter.

So maybe this tells us something about John, and about Peter. They’re human (and fallen, like the rest of us). Maybe they’re prone to jealousy of one another, vying for “best friendship” with Jesus. We hope that Jesus’s love is more expansive, hospitable even to the whole human race.

I picture Jesus as able to look deeply into anyone’s eyes, drawing out the soul of every one of us. I picture him able to connect to the true and the beautiful in every single individual, effortlessly finding a way to forge intimacy with every human on the planet.

And yet I’m also reminded that as a human on earth, Jesus had limits. Maybe not flaws, but limits. And I’m reminded that even though Jesus treats women in the Scriptures with a respect, a friendship, even a love that was totally uncharacteristic of his era (hell, it’s arguably uncharacteristic even of the present era), he still operates with some reserve with the women.

I can’t shake the image of Mary Magdalene realizing Jesus stands before her, when she had previously thought he was the gardener. “Rabbouni!” she cries, with some kind of helpless relief and love.

And Jesus’s response? “Don’t cling to me, Mary.”

How must that have felt? Mary Magdalene is the first one at the tomb, the first to announce the truth of the Resurrection. She clearly shares some kind of real intimacy with Jesus, yet when he presents himself to her in his resurrected state, he seems to admonish her love for him, as though getting too close to a woman is dangerous. As though he knows she can’t help but go too far.

But Peter did the opposite of cling, right? At the first challenge, Peter runs; he denies Christ. And Jesus gives him another shot. Not only another shot, but the prime responsibility of leading the Church. In his resurrected state, Jesus draws closer to Peter, giving him the intimacy Mary seems only to hope for.

And maybe there’s something right about that. Jesus knew his friends better than we do, left as we are with only a few Scriptural accounts of their friendships. Friendships between men and women are complicated. Maybe Jesus knew that to let Mary Magdalene too close would be detrimental to both of them, sidetracking them from their mission to build up the Kingdom. A bro-ship is undoubtedly safer.

But what do I do with that as a woman? Where does Jesus the man end, and Jesus the Christ begin? And aren’t we incorporated into Jesus, the Christ, precisely through relationship with Jesus, the man?

Augustine’s assertion that “I am closer to God than I am to myself,” has always rung true, and brought me much comfort. But between Jesus and me—can we get that close? Must a distance exist, because I am a woman? Because Jesus isn’t giving me “the keys to the Kingdom,” does it follow that he’s warning me not to cling to him? Or has he mellowed into the Godhead since the Ascension, capable of the same level of intimacy and friendship with all of us?

“My heart is restless until I rest in you, Lord.” Augustine again. And like Peter, I have to ask: seriously Lord, if not into your arms, where else can I go?

But the question nags at me. Am I invited?

Holly Mohr lives and works in Pittsburgh, PA with her husband and 2.5 children. She can’t wait until her baby is born and she can break the “2.5 statistical stereotype” of her generation. She loves Jesus, but she sometimes fights with him, too. 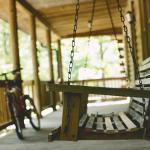 April 26, 2019
Dark Devotional: Sitting on the Porch of Catholicism
Next Post 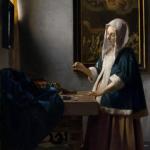 May 10, 2019 Dark Devotional: What the Good Shepherd Teaches Us about Parables
Recent Comments
0 | Leave a Comment
"Linda, have you found God yet? or are you still being evil?"
Jasper What I Learned from Dating a ..."
"What age do you think this book is appropriate for? I'll put it on my ..."
Biking in a skirt Rereading “I Walk with Jesus” in ..."
"In the 90s, I knew a few Catholic women who would flirt with every priest ..."
Linda Daily What I Learned from Dating a ..."
"REally distrubing that you choose to make this poltical, cannot take you seriously and now ..."
ME Narcissism, Exorcism, and the True Nature ..."
Browse Our Archives
Follow Us!

George Will and the Millstone of...
Catholic and Enjoying It!
Related posts from Sick Pilgrim