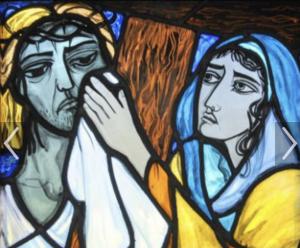 [Christ Jesus] humbled himself, becoming obedient to the point of death, even death on a cross (Phil. 2:8).

This Easter will mark my twenty-fifth year as a Catholic. I spent seventeen of those years working as a staff apologist for Catholic Answers, an independent lay apostolate in the Diocese of San Diego, California. When clients asked tough questions about the Catholic faith, our job was to present the faith in the best possible light. Using Scripture, the Catechism of the Catholic Church, magisterial documents, and other resources, we were there to explain what the Church taught and, all too often, to explain why difficulties and doubts about the faith just had to be better understood in a way that was favorable to the traditional teachings of Catholicism.

Challenges to faith were to be overcome by sheer intellectual brilliance—not accepted, let alone embraced, as crosses to be carried with little hope for relief in sight.

If the Church teaches that men and women are equal in dignity as human persons, why won’t the Church ordain women—even to the diaconate?

Oh, well, allow me to pull up Scripture verses, extracts from the Church Fathers, a couple of position papers from recent popes, and perhaps a brilliantly-argued summary from a thirty-something conservative Catholic bro with a popular podcast. This ought to suffice for you to understand that the Church couldn’t possibly have any room to grow in its understanding of sacramental theology and that you’re just wrong if you’re not convinced.

Media outlets explode with the news that a Vatican congregation has banged down its gavel and declared that there are to be no religious blessings for LGBT couples in same-sex unions.

You say that you still don’t understand why your son and his husband are being denied a blessing on their decades-long union, when your multiply-divorced daughter will be married this Saturday in a nuptial Mass at her parish church because she’s managed to get all of the necessary annulments finalized and her intended is a man? Just give me a few hours to Google the necessary Scripture verses, patristics citations, position papers, and archived podcast episodes, and I’ll get back to you.

How much harder (and less profitable) might it be to say, “You’re right. This makes absolutely no sense and I don’t understand this either”?

In the epistle for Palm Sunday, St. Paul writes about how Christ, during his public ministry, up to and including his passion and death, “did not regard equality with God something to be grasped” (Phil. 2:6). While he remained God incarnate (God can’t stop being himself), in his humanity Christ set aside the prerogatives of being God—including his omniscience.

As God, Christ didn’t need to wonder why his disciples fell asleep while he prayed in a garden, suffering in anticipation of his coming passion. He knew all about the limits of human understanding, knew the tolls that stress and worry can take on a body, knew that his disciples (with one notable exception) loved him and were doing their best to stand by him.

But as a man, it made no more sense to Jesus that his friends would nap when he needed them most than it would make sense to a woman in labor if her husband asked if he could turn on the hospital-room TV and catch a game while they wait for her to start pushing. Just as a laboring woman needs her husband to focus his attention on her and not on his sportsball of choice, Jesus needed his friends to be there for him in his agony. They weren’t. And no explanation of human frailty, however reasonable and well-argued, takes away the pain of being abandoned in one’s greatest moment of need.

Nonetheless, Jesus persevered. He suffered being betrayed to the authorities by a friend, endured being beaten, spit on, stripped, and nailed to a cross. He continued to struggle to make sense of what was happening, crying out, “My God, my God, why have you forsaken me?” (Mark 15:34). It wasn’t merely a rhetorical question, intended to remind his listeners of a prophetic psalm (Ps. 22). It was an expression of agony, of bewilderment, at divine abandonment.

If obedience to death, the kind of obedience Christ modeled in his passion, doesn’t preclude questioning God, then it sure as heaven doesn’t preclude questioning the Church. Perhaps then, if we wish to actually help disaffected Catholics rather than bask in our own intellectual brilliance, we might look at what comforted Jesus in his agony when considering what might comfort disaffected Catholics in their agony.

Jesus didn’t need the well-meaning defense of a hotheaded bro drawing his sword to slash off someone’s ear (John 18:10–11). Philosophical questions while he stood covered in blood and grime were of no help to him (John 18:38). Mockery of his need for clothes after he’d been stripped and beaten only added to his suffering (John 19:1–3). Whataboutism from fellow convicts on nearby crosses not only didn’t help Jesus, but it also did nothing to alleviate their own agony (Matt. 27:42–44).

What was of help to Christ in his suffering? Relief from carrying his cross alone (Luke 23:26); empathy from onlookers who wept at the unjust treatment he was enduring (Luke 23:27); the repentance of one of his persecutors, who set aside his own grievances and suffering to become Christ’s final defender (Luke 23:39–43); and the unconditional support and presence of his Mother and her friends (John 19:25–27).

Catholic Twitter has been debating “What’s wrong with apologetics?” My response to that question was “The problem with apologetics is it became an end instead of a means.” It became a game in which the high scorer gets radio and TV appearances, book contracts, signature podcasts, and lots of followers on the Internet. It stopped being a means of supporting the vulnerable and marginalized at risk of losing their faith and became a way to push those very people out of the Church (while bemoaning one’s own “persecution”).

The last thing the Church needs is more apologists protecting it from reckoning with the agony of Catholics suffering ecclesial abandonment. Perhaps what the Church needs instead is to humbly set aside its prerogatives, empty itself of its certainties, and allow itself to become obedient to the point of death, even death on a cross.

After all, I hear Jesus’ own story didn’t end on the cross.

Because of this, God greatly exalted him
and bestowed on him the name
which is above every name,
that at the name of Jesus
every knee should bend,
of those in heaven and on earth and under the earth,
and every tongue confess that
Jesus Christ is Lord,
to the glory of God the Father (Phil. 2:9–11).
Michelle Arnold was a staff apologist for Catholic Answers, a Catholic apologetics apostolate in the Diocese of San Diego, California, from 2003–2020, answering questions from clients about the Catholic faith via phone, letter, email, and online platforms. She contributed essays to Catholic Answers’ online and print magazines, and wrote four booklets for the apostolate’s 20 Answers series. Her 20 Answers booklets were on Judaism, the New Age, witchcraft and the occult, and the Church’s liturgical year. Now a freelance writer, editor, and proofreader, Michelle Arnold has a blog at the Patheos Catholic channel. A portfolio of her published essays is available at Authory.

March 29, 2021 Things Keeping Us Going: Out Like a Lamb Edition
Recent Comments
0 | Leave a Comment
Browse Our Archives
get the latest from
Sick Pilgrim
Sign up for our newsletter
POPULAR AT PATHEOS Catholic
1

Sacking the Saints - Pentecostal Persecution of Religious...
Co-authored by Dr. Ana Keila Mosca Pinezi* and Dr. Andrew Chesnut One...
view all Catholic blogs
What Are Your Thoughts?leave a comment
Copyright 2008-2021, Patheos. All rights reserved.
error: Content is protected !!