“Our hearts are restless, O God, until they rest in You.”

The story begins at the end of St. Augustine’s life, in 430 A.D. The aged bishop (Franco Neri), philosopher and theologian talks to his niece as he tries to negotiate peace with the Vandals  as they lay siege to the city of Hippo in Northern Africa.

Flash back to about the year 371 A.D. when a young Roman leaves Thagaste (in what is now Algeria) to pursue studies in rhetoric in Carthage (now a suburb of Tunis, Tunisia).  The young man, Augustine (Alessandro Preziosi) dwells with his friend  Romanianus (Cesare Bocci).  He is extremely successful in structuring and delivering winning arguments against his opponents.  The truth for Augustine, for a while, exists only when he wins. The young man embraces Manichaeism, a gnostic and pagan system of belief that negated God’s omnipotence with a dualistic worldview of good vs. evil. Adherents pretty much did as they pleased. Although he was raised a Christian, Augustine would not be baptized for many more years. Augustine’s life choices cause his Christian mother Monica (Monica Guerritore) to worry and she prays for him always.

Soon his father Patricius (Cosimo Fusco) becomes ill. Just before death, with his wife Monica at his side, he is baptized.

Augustine falls in love and returns home with a young woman, Paola  (Aglaia Szyszkowitz) whom he cannot marry because she is a slave and he is a Roman citizen. She gives birth to their son, Adeodatus.

After a situation that tarnishes Augustine’s reputation as a teacher and lawyer he deserts Paola and his son and departs for Milan. He is engaged to serve as the young emperor’s spokesperson. Augustine writes and delivers speeches but comes up against a formidable rival, the bishop Ambrose (Andrea Giordana), who is an outstanding Christian orator speaking up for human and divine truth. Augustine’s search for God grows stronger and in 384 is baptized.

Augustine mourns the death of Paola as he and his mother are about to return to Africa.  He is ordained a priest and bishop of Hippo. He also founds a monastery and writes spiritual and theological classics that have influenced the study of God ever since. Until  the end Augustine uses his skills as a negotiator and orator to reunite the Donatists , a schismatic Christian sect, with the Church.

If you are looking for transcendent moments in “Restless Hearts,” alas, there are but a brief few. It’s more of an action film – in the sense of deeds and events – that only hints at the huge movements of grace going on in Augustine’s soul. I really expected to see that moment when Augustine was walking along the seashore pondering the mystery of the Trinity when he sees a young child filling a hole in the sand with water. Augustine asks him what he was doing and the child replies that he is going to pour all the water of the oceans into the hole. Augustine said, “But that is impossible!” Then the child transforms into the Christ Child and says, “It would be easier for me to get all the water of the world’s oceans into this small hole then for you to explain the reality of the blessed Trinity.” Ah, but this is a legend popular in the Middle Ages with no connection to Augustine’s writings. Still.

In this U.S. political season the film’s exploration of what makes authentic rhetoric is refreshing.

Some of our sisters had seen the film so I asked what they liked/didn’t like about it. Each one said they had expected more especially when it came to explaining Manichaeism, the Donatist schism or even the Vandals. Augustine’s joining the Manicheans and engaging the Donatists takes up significant time in the film and will likely send people to the Internet or tomes on Church history. The story is bookended with the Vandal invasion but little is said about who these looting invaders were. One sister told me that “The film illustrates a large part of ‘The Confessions’ but really doesn’t add to what you already know.”

We all liked the portrayal of St. Monica.

We have no idea where the niece came from.

One of Augustine’s early manuscripts is “On the Happy Life”. The content could have been developed when Augustine, Monica and Adeodatus were waiting to leave Rome for Africa. Indeed, of all his writings this is the one that I love the most. In it he discusses what makes a happy life with those close to him: his mother Monica, his son Adeodatus, his brother, other relatives and students. The language is accessible and heartfelt. So it is a little odd that the script neglected to develop Adeodatus’ character and his relationship with Augustine. As it is Augustine seems like a really uninvolved, uncaring and cold father and Monica just fades away. No, we don’t like it when films take too much license with a story, but I think “Restless Hearts” would have been more stimulating and inspiring if the writer and used more sources to express the truth of Augustine’s story.

“Restless Heart” is a 2010 mini-series from Italy’s RAI television that was then edited into a movie. The film has high production values, excellent cinematography, the acting is very good, and was filmed in English (not dubbed and no subtitles.) At first the costumes appear to be “robe and sandal” style we have come to expect from Bible films but it becomes evident that the costumes were recreated with attention to historical detail. There’s still a lot of desert but it’s about 300 years after the death of the last apostle and the Roman empire is fading. The actors’ names may not be familiar to American audiences but several have extensive film and television credits and we know their faces. (Check out Franco Neri’s filmography – he plays the aged Augustine and director Christian Duguay‘s as well. You may know him best for his 1999 made-for-television film “Joan of Arc” with LeeLee Sobieski.)

As an introduction to the life of the Father and Doctor of the Church along the lines of “The Confessions,” as biography, “Restless Hearts” should hold the interest of young adults and adults who enjoys learning about the lives of the saints.

There are exceptional children who will sit through 2 hours + of a religious film set in obscure times but the interest age for young people is probably 16 and over and then only if you let them know what it’s about beforehand. If you don’t know what Manichaeism or Donatism are you can bet they won’t either. (I did not find a child’s guide to these subjects online). The Vandals might be the easiest to explain given that it’s the root word for vandalism.

The main theme of the film is Augustine’s search for God with the emphasis on physical movement over inner journey. In the best films images and sound work together to manifest inner realities. “Restless Heart” only suggests these and your previous knowledge about Augustine and your own experience with the spiritual life will engage your gestalt so you can fill in the blanks.

Besides the narrative of Augustine’s life I think the film would be a point of departure for teaching or studying Church history – the most neglected discipline of theology and in my humble opinion, along with patrology (or patristics  of the life and writings of the Church Fathers), the most fascinating.

The only jarring element of the film for me was the use of the word “Catholics” instead of “Christians.” Though “Catholic” is now used in many languages,  it first came into use in English in the 17th century to differentiate between various Christian churches that had separated from Rome. No Church document ever used or uses the term “Catholic” or “Roman Catholic”. So the use of “Catholics” in “Restless Heart” is odd. Someone doesn’t know their Church history.

Augustine is a saint for all Christian churches and beyond.

All the sisters of my community who saw the film said they would recommend the film as a biography without hesitation, noting that the best film about Augustine is still to be made.

For more about the film visit the Restless Heart homepage

According to press notes “Restless Heart” will not be a theatrical release; it is, however, available for sponsored theatrical screenings across the country. Individuals, parishes, church groups and other organizations can work with The Maximus Group’s outreach team to bring the movie to a theater near you starting August 28 until the first week of November. For more information contact the Maximus Group at 1-877-263-1263 or RestlessHeart@MaximusMG.com.

The release of the DVD has not yet been announced but my guess is Advent 2012.

For even more information visit RAI television’s website.  It’s in Italian but Google will translate the page.

The best site for all things St. Augustine of Hippo and the Augustinian Order visit AugNet

The complete text (older English translation) On the Trinity 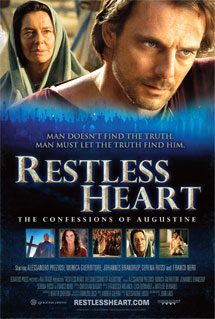 August 30, 2012 The Odd Life of Timothy Green
Recent Comments
0 | Leave a Comment
"When did this receive and Academy Award?"
Chrys Who Invented the “Jump Shot”? New ..."
"Character matters. Yeah? What then? Look what sort of character is running to grab power ..."
ounbbl The Hopeful Relevance of “The American ..."
"lol wut"
Bloodeagle 1917 is a relentless video game-like ..."
">To each their own I supposeSo you admit you wasted your time writing what you ..."
GoldRushApple Doubt the Movie
Browse Our Archives
Related posts from Sister Rose Movies