“Wreck It Ralph” and the shooting at the elementary school in Connecticut today December 14, 2012 Sister Rose

“Wreck It Ralph” opened in November I didn’t have a chance to see it until today. I was driving home from seeing the film and listening to the news on NPR. The newsperson described President Obama as wiping away tears as he spoke words of comfort to parents, his behavior noted by many news outlets.

2012 has been a year marked by gun violence tragedies.

On August 22 I recorded a video and posted a study guide after the shooting at in Aurora, CO at the midnight screening for “The Dark Knight Rises“. This is for parents, teachers, and caregivers on how to assist children, how to talk to them, in the face of gun tragedy.

On October 5, 2012 I posted an essay  on the gun culture: The media’s part in the culture of guns.And now we have another mass shooting, actually several in the last week alone. The shooter killed himself.

Five people died in a shooting at the Tule River Indian reservation in Visalia, CA on December 10. The shooter, a male aged 31, was killed by police.

Three died in a shooting at a Portland, OR mall on December 11. The shooter, a male aged 22, took his own life.

I just heard the president say on CNN that he does not respond as president to these gun tragedies, but as a parent.

But he is the president and when is enough, enough? As a presidential candidate Obama promised to confront the gun problem in America before he was first elected in 2008. But nothing.

How many more people, children, have to die because no one will do anything?

Why do the males in our country carry out such spectacular deeds of violence with guns? What does this say about men in the United States? Who cares about the boys growing up in our culture?

The gun problem has many fronts: the fragility of the family, lack of gun control, schools and education that focus on test results rather than the education of the whole person of the child, entertainment and information media, the normalization of the military as a way to solve problems, a lack of respect for life, greed, and a lack of political will to actually do something to prevent another gun massacre. The gun lobby is the most powerful in Washington, DC. Why?

I don’t care that the Connecticut shooter had the guns legally. The guns are registered to the shooter’s mother, according to news reports. Obviously this made no difference whatsoever.

Obviously, it’s not good enough to register guns or get them legally.

“Wreck It Ralph” is an overly long animated tale about characters in a variety of arcade games. It’s overly sweet – most of the gaming action takes place in a kind of confection heaven called “Sugar Rush” – and Ralph (voice of John C. Reilly) “plays” a bad guy who wants to play a good guy in his video game. Included the arcade game movie is a storyline about a female soldier wielding a huge stylized assault rifle and accompanied by her unit and a tank. Normalizing violence to pre-schoolers by creating an attractive female character, Sergeant Calhoun (voice of Jane Lynch), to destroy giant virtual bugs, may be a good commercial choice but it does not make sound cultural sense when our country has to deal over and over again with tragic incidents of unrestrained violence, especially when it is violence against children.

Sergeant Calhoun, one of the “good guys”,  exemplifies video game violence for the youngest among us. Click here to read Sgt. Calhoun’s bio on the Disney website. 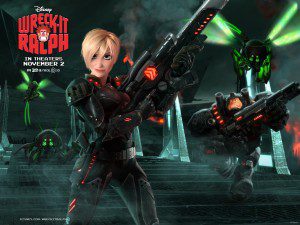 It’s too bad that I saw “Wreck It Ralph” on the day that this mass shooting occurred. Without this context I would have noted the guns and soldiers but the film would, perhaps, not have struck me so strongly as another misrepresentation of violence as acceptable. Why socialize the youngest among us into this world of violence? Are parents talking to their kids about what they see and experience on television and at the movies and in video games – even in a Disney movie? Do they question the film: What’s going on? What’s really going on? Does it make any difference? How can I make a difference?

Films that have fantasy violence and stylized violence are still films with and about violence.

Tonight, I pray for the victims and their families and their unspeakable grief.

I pray for the next victims of gun violence because these shootings are not going away as long as we refuse to take steps to resolve America’s love affair with guns and violence as the preferred way to solve problems.

I pray that President Obama will keep his promise to control guns more, to have the courage of his convictions.

I pray that entertainment media will tell stories that do not use violence to build up and “resolve” the drama by killing. I pray we will get more television programs like USA’s “Fairly Legal” (that did not get renewed for a third season, much to my dismay) about a lawyer who left the courtroom to become a “mediator” and resolve problems in a peaceful, fair way. The news people will lead the national mourning and sound concerned – and then, nothing.

Violence, the depiction of violence, isn’t sweet, funny or fun.

Why do we as citizens, as people of faith, refuse to hold our politicians accountable for their lack of action on gun control?

I pray the news media will tell the truth about the gun lobby.

I am so tired of the killing and the violence.

Jesus said, “Blessed are the peacemakers.”

Lack of gun regulation isn’t freedom, it is the imprisonment of our humanity.

Until next time, folks.

I took a vow of non-violence in October.

Parents, you can do this, too. This is how parents can model ways to resolve conflict yet it is for all people of good will.

RECOGNIZING THE VIOLENCE IN MY OWN HEART, yet trusting in the goodness and mercy of God, I vow for one year to practice the nonviolence of Jesus who taught us in the Sermon on the Mount:

“Blessed are the peacemakers, for they shall be called the sons and daughters of God…You have learned how it was said, ‘You must love your neighbor and hate your enemy’; but I say to you, Love your enemies, and pray for those who persecute you. In this way, you will be daughters and sons of your Creator in heaven.”

Before God the Creator and the Sanctifying Spirit, I vow to carry out in my life the love and example of Jesus

God, I trust in Your sustaining love and believe that just as You gave me the grace and desire to offer this, so You will also bestow abundant grace to fulfill it.

Thanks to Pax Christi

December 13, 2012
"The Hobbit" is entertaining and inspiring hero's tale
Next Post

December 17, 2012 Children's Holiday Collection: Ten animated classic stories
Recent Comments
0 | Leave a Comment
"When did this receive and Academy Award?"
Chrys Who Invented the “Jump Shot”? New ..."
"Character matters. Yeah? What then? Look what sort of character is running to grab power ..."
ounbbl The Hopeful Relevance of “The American ..."
"lol wut"
Bloodeagle 1917 is a relentless video game-like ..."
">To each their own I supposeSo you admit you wasted your time writing what you ..."
GoldRushApple Doubt the Movie
Browse Our Archives
get the latest from
Entertainment
Sign up for our newsletter
POPULAR AT PATHEOS Entertainment
1