‘Beyond the Hills’ finds the devil in ignorance, fear

‘Beyond the Hills’ finds the devil in ignorance, fear March 7, 2013 Sister Rose 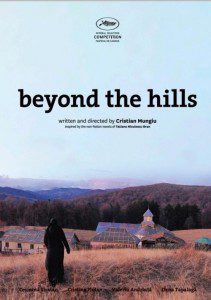 In “Beyond the Hills,” a young woman, Alina (Cristina Flutur), returns home to Romania after living and working in Germany for several years. She visits her childhood friend Voichita (Cosmina Stratan), who is a novice in a Greek Orthodox monastery in a remote area. Both women were raised in a state orphanage and seem to have had an intimate relationship in their teen years that Alina now wants to rekindle. Voichita, however, wants to be kind but is focused on dedicating her life to God and others.

Voichita asks the Mother Superior and the father who founded the monastery if Alina can stay for a bit. They agree, and she shares her friend’s small room. But Alina soon begins to show signs of instability. One day, she has a fit, and the nuns and priest take her to the hospital. She is soon released into the monastery’s care. As the days go by, the priest and some of the nuns believe Alina is possessed, and they restrain her in order to carry out an exorcism ritual, to drastic effect. The priest and some of the nuns are arrested and charged in Alina’s death.

Director/writer Cristian Mungiu’s stark tale is based on true events that occurred in 2005 and on ….

Click here: Beyond the Hills finds the devil in ignorance, fear to continue reading on my blog at the National Catholic Reporter

March 11, 2013 What people are saying about the new pope!
Recent Comments
1 Comment | Leave a Comment
"When did this receive and Academy Award?"
Chrys Who Invented the “Jump Shot”? New ..."
"Character matters. Yeah? What then? Look what sort of character is running to grab power ..."
ounbbl The Hopeful Relevance of “The American ..."
"lol wut"
Bloodeagle 1917 is a relentless video game-like ..."
">To each their own I supposeSo you admit you wasted your time writing what you ..."
GoldRushApple Doubt the Movie
Browse Our Archives
get the latest from
Entertainment
Sign up for our newsletter
POPULAR AT PATHEOS Entertainment
1