“The Incredible Burt Wonderstone” – save your money

“The Incredible Burt Wonderstone” – save your money March 15, 2013 Sister Rose 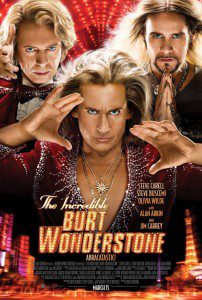 As a little boy Burt is bullied. He spends his 10th birthday alone; his mother leaves him his favorite cake – in a box. He has to bake it himself. But she gives him a wonderful present, a Rance Halloway magic set. He quickly learns some tricks and makes friends with Anton, another lonely boy at school.

Thirty years later Burt (Steve Carrell) and Anton (Steve Buscemi) have a gig in Vegas but a new “magician” comes to town and threatens their contract: Steve Gray (Jim Carrey). Burt and Anton have a falling out, Anton goes to do social work in Asia where people need clean water and food (he passes out magic kits instead) and the casino owner, Doug (James Gandolfini), fires Burt.

This is not an entirely bad premise but it’s a really poor quality film, despite an approximate $30 million budget. Even the great Alan Arkin, who plays the aging Rance Halloway, could not save this film – and for once he is not even raunchy.

There are three elements that send this film to the recycling bin for me: 1) Jim Carrey’s antics are not magic, as Burt points out, but are stupid physical acts of self-violence that do actual bodily harm, like drilling a hole in your head or laying down on burning coals. He’s a shock performer, it’s completely inappropriate “entertainment” for kids, even PG-13 kids, and it’s not funny; 2) the way Burt treats his assistant Jane (Olivia Wilde) though he does apologize for objectifying her and sexually harassing her; 3) the use of a drug from Asia to smoke people into oblivion in an utterly stupid trick that defies credibility.

There are a few funny lines but this film is a groan fest from start to finish. It could have been a nice movie but at some point, but with four writers involved (and probably more uncredited – the more writers the worse the movie), director Don Scardino must have decided to go from sweet to sour, thrown in the towel and said “To heck with it.”

Unless these filmmakers really had some pro-social motivation like: we want you, the audience, to see how low you will go just to be entertained.

If these guys can get such an awful movie made, why won’t anyone take a chance on mine?

March 16, 2013 Pope Francis speaks to journalists about his name, wanting a church that is poor, and role of media
Recent Comments
0 | Leave a Comment
Browse Our Archives
get the latest from
Entertainment
Sign up for our newsletter
POPULAR AT PATHEOS Entertainment
1