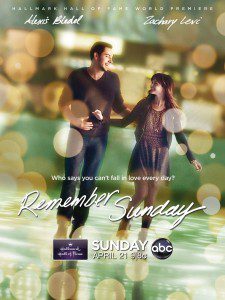 Molly (Alexis Bledel) is a sweet, ditzy, waitress and college student in New Orleans on a first name basis with the traffic man who comes to take the boot off of her car over and over again. She is romantically challenged and shares an apartment with Jolene (Valery Azlynn) who constantly nags her to find a good man. Molly has college loans but is in a waiting pattern because she is expecting her portion of an inheritance to come through any day. Her dream is to open a flower shop.

One day a man, Gus (Zachary Levi) comes into the café where Molly works and they chat a little. She notices that he is talking into a recorder as he waits for a friend.  When he leaves the table to take a phone call she leaves a message for him that he discovers that night.  Within a couple of days they meet again when Molly goes into the jewelry shop where Gus works. She pawns a valuable ring for cash to pay her parking tickets.  Though Gus does not remember Molly he likes her and instead of putting the ring on sale puts it aside with her name on it.

Gus lives in an apartment filled with notes on the cabinets and walls and a file that tells him to read it every morning.  Soon enough we learn, though it takes Molly longer, that Gus had an aneurism deep in his brain that basically destroyed the part that controls short-term memory. His long-term memory is in tact but he can make no new memories and must begin each day anew.  His sister Lucy (Merritt Weaver) devised a system for him to manage each day. He can no longer work as a scientist but is able to function well at the jewelry shop because it is owned by family friends that he remembers.

Although Molly is confused by Gus’s memory loss, she thinks he’s like her, just chronically forgetful. They start seeing each other and Molly is falling in love.

If you saw the 2004 film “Fifty First Dates” starring Adam Sandler and Drew Barrymore as a woman incapable of forming new memories, you know the story. To its credit, “Remember Sunday” is a more calm and dignified version about the role of memory in our lives and intimate relationships.

But here’s the problem with stories like these. The characters want to get married, and at least one is capable of love and the necessary discernment to choose freely. But the person with the brain impairment, according to a priest who works at a diocesan marriage tribunal, “doesn’t have the discretion or the capability to assume the obligations of marriage.” He said, “It can feel like love but consent is defective because of the physical anomaly.”

Watching “Remember Sunday” is enjoyable as a romantic comedy because of Alexis Bledel’s lovely performance (we remember her from “The Gilmore Girls” and “The Sisterhood of the Traveling Pants”) and Zachary Levi’s (“Chuck”) ability to be a man who must start each day anew and the toll this extreme limitation takes on his hope for lasting happiness. The supporting cast is very simpatico.  Barry Marrow’s teleplay stabilizes the plot by adding in Gus’ former life as an astrophysicist who watched the heavens to search for meaning.

But ultimately, for anyone who understands the meaning of marriage, “Remember Sunday” can never work, not really, until science comes up with a way to restore Gus’s brain.  I think “Remember Sunday” is one of the most watchable of recent Hallmark Hall of Fame movies but this is one romantic fantasy where love cannot change someone, and a real marriage is not at the end of Molly’s rainbow.

April 27, 2013 "This is Our Time" is a movie with a message
Recent Comments
0 | Leave a Comment
"When did this receive and Academy Award?"
Chrys Who Invented the “Jump Shot”? New ..."
"Character matters. Yeah? What then? Look what sort of character is running to grab power ..."
ounbbl The Hopeful Relevance of “The American ..."
"lol wut"
Bloodeagle 1917 is a relentless video game-like ..."
">To each their own I supposeSo you admit you wasted your time writing what you ..."
GoldRushApple Doubt the Movie
Browse Our Archives
get the latest from
Entertainment
Sign up for our newsletter
POPULAR AT PATHEOS Entertainment
1