“To the Wonder” yearning to feel life 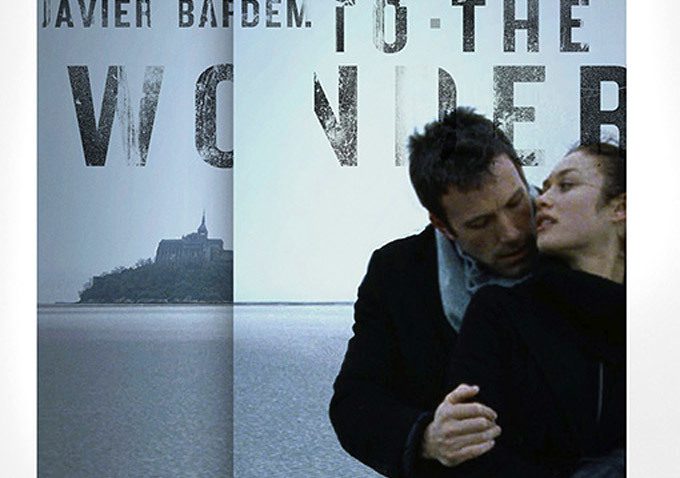 When writer/director Terrence Malick’s latest cinematic painting unfolds Neil (Ben Affleck) and Marina (Olga Kuryenko), playfully cross the causeway to Mont St. Michel at low tide. They visit the old monastery. Neil says nothing but Marina reflects on love and wonders what will come next.

They go from France to Oklahoma, with Marina’s daughter, Tatiana (Tatiana Chiline). The house is new, empty, and though almost sterile, filled with light. Marina and Tatiana begin to adapt, but Marina feels imprisoned though vast prairies surround her. There are few neighbors and she cannot go anywhere.

As far as a plot goes, “”To the Wonder” does not tell a story as much as present a cast, place them in a situation with minimal dialogue, and allow the audience to fill in the vast spaces that stretch out beyond. We are aided in this experience by voice-overs that reveal the inner uncertainties of life, love, and commitment.

The similarities in visual style and pace between “To the Wonder” and Malick’s 2011 film “The Tree of Life” are obvious (you can include his 2005 “The New World” in this list as well): the deliberate gaze of the camera, the unhurried, almost sluggish pace of the characters’ discernment can create a sense of spiritual anxiety in the audience and begin to feel what the characters could be feeling. Even as he did in his 1998 “The Thin Red Line,” Malick wants to probe the metaphysical by asking what it means “to be” and to consider the choices before us. Malick is not in a hurry and though the visuals in “Wonder” are not as vivid and startling as those in “The Tree of Life,” the sacramental style, if you will, of the cinematography continually juxtaposes images that reveal the inner reality of the characters. Malick’s last films consider the reality that human freedom continually pushes up against limits that, depending on the choices and responses of the characters, can mean disconnectedness, isolation, imprisonment, regret, or a surrender to grace with the freedom and love that brings people together.

“To the Wonder” is not a film that crowds will run to see. But if you have the time and the desire to “be with” a master filmmaker and his art, you will encounter the transcendent grace that flows from a film that takes its time to consider the meaning and the wonder of it all. The life-size question for those who love to consider film and theology is: who is God for Terence Malick?  I feel a doctoral dissertation coming on because you cannot just walk away from Malick’s films if you have ever wondered about God and the meaning of life.

SIGNIS, the world Catholic association for communication, gave its highest award to this film in 2011 at the Venice Film Festival. The description of the judges reflects the film well:

“Technically rich and poetic in storytelling, “To the Wonder” is a stand-alone film which celebrates the mysteries of beauty, truth and love. It is a story of individuals who move through life with intense passion. At times, their passion gives way to desolation, making them acutely aware of their own weaknesses and limitations. Their experiences shed insight about the universal meaning of the joys and struggles of life. The film’s rich composition, textured direction, and its use of light bring together elements of divinity and humanity ultimately creating a sacramental experience which reveals God’s gift of unconditional love.”

Film critic Roger Ebert reviewed “To the Wonder” just days before he died on April 4, 2013. It was his final encounter with cinema and his insights prove that “To the Wonder” is so much more than a movie.

April 11, 2013 "42" the story of two men who would not let history pass them by
Recent Comments
0 | Leave a Comment
Browse Our Archives
get the latest from
Entertainment
Sign up for our newsletter
POPULAR AT PATHEOS Entertainment
1