There’s Something in the Air (“Après mai”) 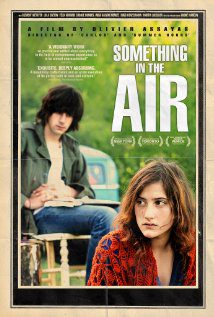 This French film won Best Screenplay at the 2012 Venice Film Festival, but I am not quite sure why. It tells the personal story of the filmmaker Olivier Assayas, a kind of semi-autobiography. It starts off well enough in a high school classroom in Paris 1971, when a teacher reads from Blaise Pascal: “Between us and Heaven or Hell there is only life, which is the frailest thing in the world.”

From then on, the film follows the main character, Gilles (Clément Métayer), an aspiring artist who wants to make films, through the student-led demonstrations about politics and the general drug-haze idealism of the flower-child times in France. Gilles and his friends and acquaintances get through it, and the audience is not quite sure why it was all so important except as a moment of cultural history. Perhaps it is the filmmaker’s belief that art can change, and maybe even save, the world. Whether this is the film to express that or not will be up to audiences. With English subtitles.

May 2, 2013
"Midnight's Children" and the search for identity
Next Post

May 12, 2013 "The Invisible War" reveals extent of sexual assault and lack of redress in military
Recent Comments
0 | Leave a Comment
Browse Our Archives
get the latest from
Entertainment
Sign up for our newsletter
POPULAR AT PATHEOS Entertainment
1