“Blackfish” examines the tragedy of orcas in captivity 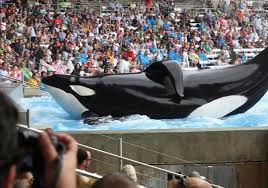 Tilikum, a longtime star of SeaWorld, is an orca that was captured near Iceland in 1983 at about 3 years of age. During these 30 years in captivity, Tilikum has killed three people and seriously injured another.

Blackfish is a documentary by director Gabriela Cowperthwaite that traces the origins and development of Tilikum’s aggressive behavior and asks probing questions about the morality of capturing and keeping wild animals for entertainment and profit.

Through interviews with former SeaWorld trainers and witnesses of those tragic events, the filmmakers weave the background story and enhance these accounts through compelling video footage of how orcas are captured and family groups separated, as well as the strident living conditions of these majestic animals. Cowperthwaite likens the existence of orcas in captivity to that of a human forced to live out his or her life in a bathtub.

The film reveals that SeaWorld teaches visitors that orcas live longer in captivity, when it is a known fact they do not. This calls into question the park’s …. CLICK HERE to continue reading my review at St. Anthony Messenger magazine.

July 13, 2013 "Now You See Me" is a caper film about magic and justice
Recent Comments
0 | Leave a Comment
"When did this receive and Academy Award?"
Chrys Who Invented the “Jump Shot”? New ..."
"Character matters. Yeah? What then? Look what sort of character is running to grab power ..."
ounbbl The Hopeful Relevance of “The American ..."
"lol wut"
Bloodeagle 1917 is a relentless video game-like ..."
">To each their own I supposeSo you admit you wasted your time writing what you ..."
GoldRushApple Doubt the Movie
Browse Our Archives
get the latest from
Entertainment
Sign up for our newsletter
POPULAR AT PATHEOS Entertainment
1