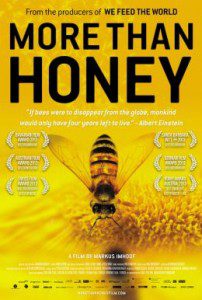 For the last 15 years the disappearance and mass deaths of honeybees has been diagnosed as “colony collapse disorder”.  In 2008 the CBS television show “60 Minutes”  explored the phenomenon and in 2010 the documentary “Queen of the Sun: What are the bees telling us” firmly placed the cause of colony collapse disorder at the feet of pesticides. In April 2013 CBS news ran a segment: “Deepening Honey Bee Crisis Creates Worry Over Food Supply“. It’s really worth a look because it focuses on a class of pesticides called “neonicontinoids” as the culprit. These pesticides have also been determined to be toxic to birds and other wild life.

A new documentary film by an Oscar-nominated Swiss filmmaker Marcus Imhoof, whose family raised bees, is an interesting and intense look at a variety of causes for the death and disappearance of honeybees.  Sometimes fascinating, and sometimes a bit tedious, nevertheless, “More than Honey” is a call to action on many fronts, pesticides being just one. At an almond grove in California, bees die when they are sprayed with pesticides but no one seems especially concerned.

One of the most amazing stories the film tells is about Chairman Mao’s campaign in China beginning in 1958 to rid a part of the country of birds because they ate the grain the people needed for themselves. However, by wiping out the birds, crop-eating insects, especially locusts, took over.  Even worse, the bees disappeared with nothing to pollinate. Today, all pollination in one area of China, is done by hand. The bees have not returned.

Regardless of the cause,  the death of honeybees is a disaster.  The quote attributed to Albert Einstein, “If bees were to disappear from the globe, mankind would only have four years to live” drives the film. The filmmaker makes a case for incest within species and pesticides as being two possible causes for colony collapse disorder. As a remedy, Imhoof looks to the Africanized killer bees that escaped from a lab in Brazil in the 1970s and have moved north. All the myths about them have proven untrue, according to Imhoof, and today they are known to be exceptional honey-makers and seem, so far, impervious to some pesticides.

The film has some amazing close-up camera work of bees in hives and the explanation of how bee colonies work – and flourish – is fascinating. Actor John Hurt narrates.

How many more movies and television shows do we need before we do something to protect our food supply by ridding agriculture of pesticides? The European Union has banned them. What’s wrong with the USA? 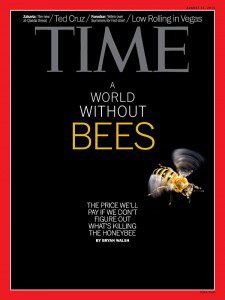 August 15, 2013
"Austenland" is fun, campy faux fluff and Jane Austen fans may hate it (but I liked it)
Next Post

August 17, 2013 "Standing Up" is a touching coming-of-age film based on teen novel
Recent Comments
0 | Leave a Comment
"When did this receive and Academy Award?"
Chrys Who Invented the “Jump Shot”? New ..."
"Character matters. Yeah? What then? Look what sort of character is running to grab power ..."
ounbbl The Hopeful Relevance of “The American ..."
"lol wut"
Bloodeagle 1917 is a relentless video game-like ..."
">To each their own I supposeSo you admit you wasted your time writing what you ..."
GoldRushApple Doubt the Movie
Browse Our Archives
get the latest from
Entertainment
Sign up for our newsletter
POPULAR AT PATHEOS Entertainment
1