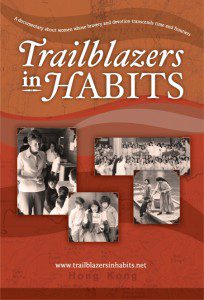 When I was growing up, I had a friend who went to Catholic school. For several years, I would spend the night at her house for New Year’s Eve. We would try to stay up until midnight, but I never made it. What this public-school kid really liked about visiting her house, though, were the Catholic books and comic books she had. The most memorable of the comic books was, to me, the one about Bishop F.X. Ford of Maryknoll. My mom used to send $5 every Christmas to Maryknoll in memory of Bishop Ford, but it was the comic book that brought it together for me.

I had just entered my own community of the Daughters of St. Paul in 1967 when I encountered the photo-packed book Bernie Becomes a Nun, published in the 1950s. It was fun comparing Maryknoll’s novitiate days with our own. I remember being intrigued by Sr. Bernie doing some plumbing. One of my co-novices almost entered Maryknoll because of that book and later, as a Pauline missionary to Peru, had the chance to meet Dominican Sr. Bernadette Lynch, the lovely protagonist of a book that can no longer be had.

For more than a century, Maryknoll priests, brothers and sisters have captured — indeed, helped form — the religious and missionary imagination of Catholics in the United States and, as a new documentary about the Maryknoll sisters attests, the world as well.

Filmmaker Nancy M. Tong graduated from a Maryknoll school in Hong Kong (the first of two schools for girls opened there in 1925 — both continue today) but only came to realize the extent of Maryknoll’s work while doing research before accepting this undertaking.

“Then I realized the scope of the sisters’ work in social justice and their work with the poor in all parts of the world,” Tong said in an interview. “That became the inspiration for ‘Trailblazers in Habits.‘ ”

As one of the sisters attests, these missionaries to China initially were thought to be “Nice women in strange outfits,” and anything they did for the poor was judged to be subversive, especially their work to save abandoned baby girls and to assist women.

As the years go by, we learn that these sisters would be sent to prison, placed under house arrest and murdered for their good deeds, yet they would continue to serve.

The advantage to being founded in the 20th century in the United States….. CLICK HERE to continue reading on my blog at the National Catholic Reporter (and for the film’s website to order a copy).

October 11, 2013
"Captain Phillips" is Tom Hanks at his very best but the film raises questions
Next Post

October 21, 2013 What are Cinema Divina & Media Mindfulness? Find out on our Webathon page
Recent Comments
0 | Leave a Comment
"lol wut"
Bloodeagle 1917 is a relentless video game-like ..."
">To each their own I supposeSo you admit you wasted your time writing what you ..."
GoldRushApple Doubt the Movie
">neither of the main characters seemed to care about the welfare of the black child ..."
GoldRushApple Doubt the Movie
"WTF?"
Richard B ‘The Curse of La Llorona’ gives ..."
Browse Our Archives
get the latest from
Entertainment
Sign up for our newsletter
POPULAR AT PATHEOS Entertainment
1