Anne Frank’s 85th birthday: the girl behind the diary 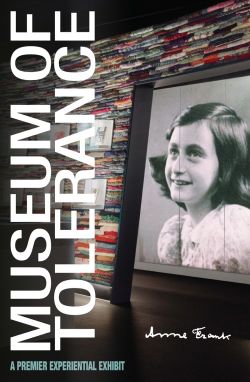 In October, the Museum of Tolerance in Los Angeles launched “Anne: A Premier Experiential Exhibit” to commemorate the life of Anne Frank, who would have turned 85 on Thursday, for a 10-year stay. I had the opportunity to visit the exhibit Sunday as a kind of introduction to a performance of “About Anne: A Diary in Dance” by the Helios Dance Theater company. A second performance will take place Thursday. 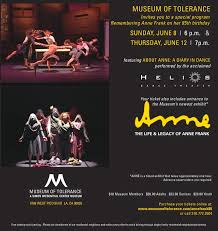 I think most of us have read or know about The Diary of Anne Frank (or Anne Frank: The Diary of a Young Girl), first published in 1947 by her father, Otto Frank, in Dutch. The book has been translated into at least 67 languages, including into English in the United States in 1952, and has sold 30 million copies. Numerous films based on the diary as well as interpretations for television and stage have been produced since Otto Frank discovered the red plaid diary in his family’s hiding place after he was liberated from Auschwitz. Anne and her sister, Margot, died of typhus in the Bergen-Belsen concentration camp just weeks before liberation.

Anne received the diary for her 13th birthday and named it Kitty after her imaginary friend. In it, Anne writes letters to Kitty and recounts the daily life of eight people hidden in a secret annex in Amsterdam for just over two years during the Nazi occupation: Anne, Margot and their parents; the van Pels family, consisting of mother, father and son; and a dentist, Fritz Pfeffer.

Anne does more than recount daily life in the hiding place Otto prepared in the building where his business was located. She explores the meaning of life and love and the beginnings of a romance. The diary reveals that the young adolescent Anne was close to her father but not to her mother.

It takes a good hour to walk through and experience the exhibit. There are a few films to watch — some very short, others a few minutes long — and many photographs, facsimiles  CLICK HERE to continue reading at the National Catholic Reporter

June 13, 2014 "Alone Yet Not Alone" a one-sided telling of a true story
Recent Comments
0 | Leave a Comment
"lol wut"
Bloodeagle 1917 is a relentless video game-like ..."
">To each their own I supposeSo you admit you wasted your time writing what you ..."
GoldRushApple Doubt the Movie
">neither of the main characters seemed to care about the welfare of the black child ..."
GoldRushApple Doubt the Movie
"WTF?"
Richard B ‘The Curse of La Llorona’ gives ..."
Browse Our Archives
get the latest from
Entertainment
Sign up for our newsletter
POPULAR AT PATHEOS Entertainment
1