May 7, 2016 by Sister Rose
0 Comments
Pope Francis invites us to reflect mercy in our speech and in Tweets for World Communications Day 2016 May 7, 2016 Sister Rose 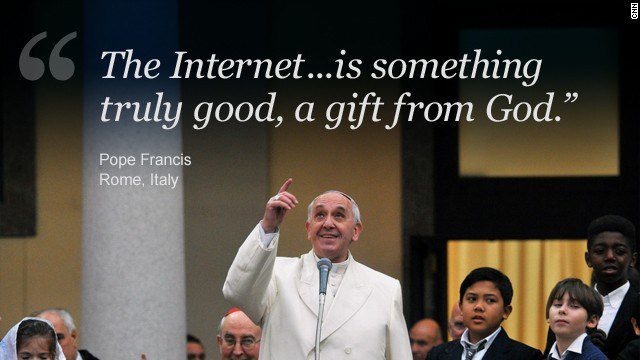 One of the best-kept secrets of the Catholic Church is that we have a beautiful tradition of teaching about communication and media that goes back to the 1930s and continues through today. This teaching covers speaking with one another in the family, parish and community, to evangelization, to all the means of communication including radio, television, movies, social media and the culture they create.

Back in 1963 one of the Second Vatican Council documents issued by Pope Paul VI was “Inter Mirifica” or “among the wonderful” technologies referring to the means of social communication. Although previous popes had written about motion pictures, radio and television, this document included those and any new media that human genius would devise. It makes you wonder just how prophetic that document was as it launched so much theological, pastoral and catechetical teaching about social communications ever since.

One small paragraph towards the end (n. 18) of “Inter Mirifica” established that every year, in every diocese of the world, a day would be dedicated to teaching about the media and our responsibilities in their regard; that the faithful would pray for those who work in the information and entertainment industries and create media; that we would contribute funds to use solely for the communications and media work of the Church in the whole Catholic world.

This day would become known as World Communication Day and held on the 7th Sunday of the Easter season. Pope Paul VI celebrated the first one just before Pentecost in 1967 making 2016 the 50th year of this commemoration. Each and every year since that first World Communications Day, the Pope announces the theme on January 24, the feast of St. Francis de Sales, the patron of the Catholic Press. In this way dioceses around the world can prepare to celebrate the technological gifts of God through projects and catechesis and collect funds to support the media evangelization work of the Church.

Unfortunately, after an initial few years, enthusiasm waned in many countries (some Asian dioceses being an exception) for making the media the subject of liturgical, scriptural and pastoral catechesis on that special day. In the United States the observation of the day devolved into a collection, often combined anonymously with others, and hearing about the gift and role of communication media and technology in our lives fell by the way side. The fact that the 7th Sunday of Easter frequently falls on the American celebration of Mothers Day may have helped lead to its overlooked status.

Paul VI, John Paul II, Benedict XVI and now Pope Francis, however, have never missed a year to offer pastoral instruction and inspiration about communications media, technology and their messages that are so pervasive in our lives.

Now Pope Francis, following in the theme of communication as encounter of his previous messages, asks us to reflect on personal communication between persons, whether by speaking or using social media and technology, and to clothe that communication with mercy. He even quotes Shakespeare: “The quality of mercy is not strained. It droppeth as the gentle rain from heaven upon the place beneath. It is twice blessed: it blesseth him that gives and him that takes” (The Merchant of Venice, Act IV, Scene I).

World Communication Day: the Archdiocese of Los Angeles with Catholics in Media Associates

The celebration of the 50th World Communication Day in the Archdiocese of Los Angeles this year is being held in partnership with Catholics in Media Associates’ (CIMA) annual Mass and awards reception on Sunday, October 9, 2016 due to the conflict with Mothers Day. It will be held at the Cathedral of Our Lady of the Angels. Archbishop Gomez and Auxiliary Bishop Robert E. Barron will concelebrate the 10:00AM Mass.

Bishop Barron, host of the DVD series “Catholicism,” will be the recipient of the first CIMA Award for Catholic Communications to acknowledge, among other things, the bishop’s influential work of evangelization using media via “Word On Fire” http://wordonfire.org. The television, film and humanitarian awards are still to be announced. Previous winners include “The Bible”, “Rectify” “Blue Bloods” “Hugo” “The Way” and actors Gary Sinese, Dick Van Dyke and Louis Gossett, Jr.

Catholics in Media Associates was founded in 1992 as a way to bring Catholics working in the entertainment industry together. CIMA Awards recognize what is true, good, and beautiful in television and film.

The Mass and CIMA event are open to the public. For more information and to purchase tickets for the awards ceremony and reception please visit Catholics in Media Associates . To contact Catholics in Media call (818) 907 – 2734 or email info@catholicsinmedia.org.

May 8, 2016 Stories that invite us to be cultural mystics
Recent Comments
0 | Leave a Comment
Browse Our Archives
get the latest from
Entertainment
Sign up for our newsletter
POPULAR AT PATHEOS Entertainment
1