Stories that invite us to be cultural mystics 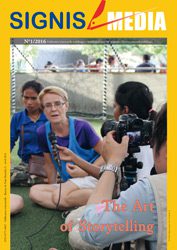 After more than six decades of life, I am still startled by the profound empathy for humanity often revealed in stories told through sight and sound. Cinema, and increasingly episodic stories on television and the Internet, brings the human face of my brother or sister up close and personal so that I experience the joy and pain of all human living and make a difference in the world.

The fact is cinema has a sacramental quality, outward signs of inner realities, that Sr. Nancy Usselmann,* a colleague of mine, says invites us to be cultural mystics. We find transcendence and grace through the encounter with these stories when they are authentic; our senses are engaged through the gift and work of the artist, our imagination set a re when we are transported to another time and place to walk in the footprints of others, and finally, our spirits enriched especially when the resolution, if there is one, is true.

Because I am interested in reform of the criminal justice system in the United States, I started watching a fictional television series on the Sundance network, entitled Rectify. It is the story of a man, Daniel, who was wrongly convicted of killing his girlfriend when he was only 17 years old. He is released after almost twenty years on death row when DNA testing exonerates him. During the second season, while I was doing something as the television played in the background, I heard, in a flashback scene of a conversation between Daniel and the prison chaplain, “Beauty will change the world”. 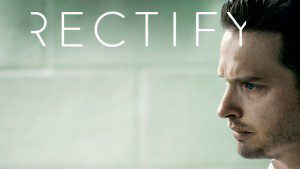 The quote from Dostoyevsky startled me and I spun around to watch, saying to myself, “Who says that on television?” en I watched the series again, from the very beginning, this time with attention, and noticed how much I had missed because I had watched it through one lens only. Rectify is so much more than the tale of a man wrongly convicted by an over-zealous prosecutor and criminal justice system. e series is permeated with uninformed Old Testament justice meted out by the powerful over the powerless; it is a family drama of love, sin, and human suffering; it is a spiritual journey of hope and redemption as Daniel makes his way back into society that has left him behind. It is an intensely human story that seems to play out under the gaze of God who waits to see if His creatures will do the right thing and bestows grace to nudge them along in unsuspecting yet ordinary ways. e divine-human dynamic in Rectify is television at its courageous, creative best.

It is the epileptic and naïve Prince Myskin in Dostoyevsky’s 1869 novel The Idiot utters the phrase “Beauty will change the world”. e prince is a Christ-figure who sees beauty where others do not, and whose words illumine the reality around him. As Pope John Paul II said in his 1999 Letter to Artists, people need to wonder at beauty if they are to solve the problems of today. 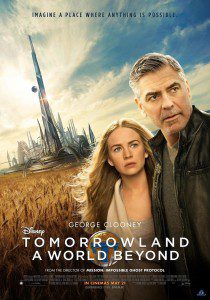 Disney’s 2015 film Tomorrowland, seems to bear this out. The premise of the film, directed by Brad Bird who co-wrote it with Damon Lindelof, is that we watch apocalyptic films year after year that are lled with disaster for the Earth and humanity, and nothing happens. We leave the cinema and go about our lives without connecting the story with reality. What if, instead of ignoring the prophetic nature of these lms, and instead of entrusting the future of the Earth to politicians and corporations, artists, scientists, and dreamers could work together to make changes and prevent human destruction of the Earth? Critics did not appreciate Tomorrowland; seeing it as a commercial for Disneyland. Yet, if a viewer can step back and appreciate the possibilities for artists to change the world for the better, the lm becomes cultural prophecy revealing values that transcend the very consumerism of the system that produced it.

“To see God in all things” is the heart of Ignatian spirituality. To have eyes to see with and ears to hear with is the sacramental action the artist carries who can reveal inner, profound, eternal realities through stories molded in sight and sound, even without trying. A story that is truly human is truly of the Gospel. Sister Nancy Usselmann writes, “To truly see this reality, the in nite beauty of the Creator in creaturely beauty, one must make that journey inward, perceived, as Augustine says, through our spiritual senses.” e artist who paints stories in light, through sight and sound, who reveals God in the human face, who leaves us free to contemplate his or her vision through our imagination searching and hungry for truth, beauty and goodness — mediates the Divine for us. And it is good.

* A Sacred Look: Becoming Cultural Mystics a Theology of Popular Culture, by Sister Nancy Usselmann, 2015, thesis for Master of Arts in Theology degree.

This article was published originally in English, spanish and French in SIGNIS Media, No. 1/2016, Brussels: “The Art of Storytelling.” Click here to download the entire issue on the topic.

May 7, 2016
Pope Francis invites us to reflect mercy in our speech and in Tweets for World Communications Day 2016
Next Post

May 21, 2016 'The Angry Birds Movie' is a volatile pun fest
Recent Comments
0 | Leave a Comment
Browse Our Archives
get the latest from
Entertainment
Sign up for our newsletter
POPULAR AT PATHEOS Entertainment
1