In April 2018 I had the honor of visiting the production set for the new film “Breakthrough” that will open nationwide tomorrow, April 17.  There I met the real Joyce Smith, played by Chrissy Metz and her son John played by Marcel Ruiz. You can read more about the film and the story behind it in a feature article I wrote for the April 2019 issue of St. Anthony Messenger (see below.)

The film is based on the 2017 book, “The Impossible” that Joyce wrote about the miracle that happened to John in 2015 when he fell through the ice of a lake near St. Charles, MO. He was underwater for about 15 minutes and was not breathing for a total of 43 minutes. No one believed he would survive – except his mother. (The book has been re-released with a new title “Breakthrough” to coincide with the film’s release.)

In the film we learn the backstory of John’s adoption from Guatemala, his love for basketball and his edgy adolescent attitude. When he and two friends decide to skate across the ice in their shoes one warm January holiday they don’t think of consequences, even as the ice cracks a bit and a concerned man calls out and tells them to come back to shore.

Once the first responders arrive, the pace of the film picks up. A friend calls Joyce who calls her husband, Brian (Josh Lucas), and races to the scene just as they are about to take John to the nearby St. Joseph’s Hospital. Once there, they allow Joyce into the trauma unit to say good-bye. Amidst all the wires and tubes she grasps his feet and prays in a very loud voice, “I believe in a God who can do miracles! Holy Spirit, I need you right now to come and breathe life back into my son!” In that moment, the monitor began to beep. John’s heart sprang back to life.

In the 16 days that followed at Cardinal Glennon Hospital in St Louis, Joyce has to deal with overly clinical hospital personnel and doctors who don’t think he will ever open his eyes and if he does, are convinced he will have severe brain damage. Prayers continue, local television stations broadcast the story and the wider community, but especially the Smith family’s church community, come to pray and keep vigil. And one by one the miracles keep happening.

I found this film a deeply moving and powerful story of faith. Even though I had read the book and met the real people and the cast, I wept more than once during the film. It makes your understand a mother’s heart. Real miracles? you might ask. Yes. because none of the doctors could then or after offer a scientific reason why John survived.

At the end of the day, this film tells a simple, straightforward story of faith, that it can move mountains. It is about the mysterious power of prayer and the hope of a mother’s heart. It is about the uncertainty parents endure and the acts of faith they make everyday when they send their children off to school or drop them at a friend’s house.

The film has a Christian vibe, of course. Generally, I don’t like “Christian” movies because they don’t trust the audience to “get it.” They preach and tell, they don’t show. But more than trying to impose a message, producer DeVon Franklin and director Roxann Dawson choose to bring us into that trauma unit and the ICU room and witness for ourselves that miracles are real.

I loved meeting Chrissy Metz who plays this “tiger mother” very well. As Joyce she’s not perfect. She gets irritated at the hospital staff and forbids any negative talk in John’s room because she knows he can hear. She pushes back at her husband who scolds her on the one hand and on the other cannot stay in John’s room. Having met both the real Joyce Smith, who is a sweetheart, and Metz who was just so candid and generous, I may seem like I am overdoing how deeply moved I remain by this story, this movie. Don’t look for apparitions or visits to heaven. It’s about a near catastrophic tragedy that for God’s reasons, became a miracle of survival. It is about a mother who wouldn’t let go or give up.

During Holy Week, as we see our faith tested in the wider culture and as we watched the Cathedral of Notre Dame in Paris burn yesterday, “Breakthrough” is like the balm of Gilead that can calm the weary soul.

CLICK HERE to see my Interview with Chrissy Metz

‘Breakthrough’: A Story of Faith and Miracles 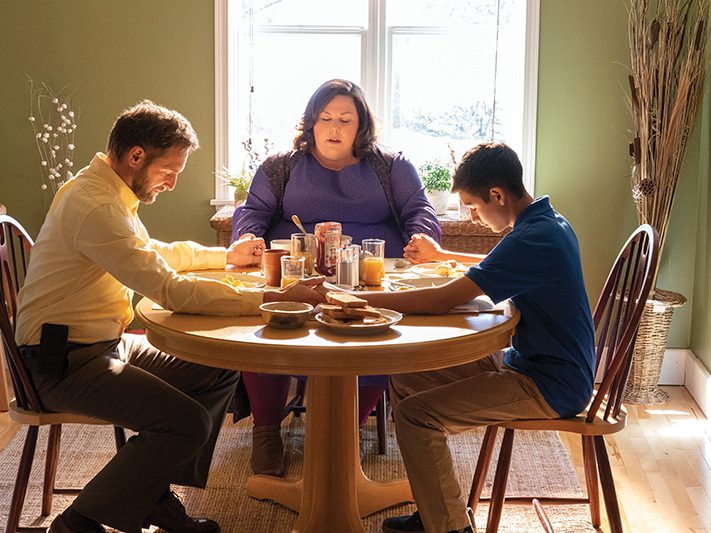 For 16 days in January 2015, a teenage boy lay in the pediatric ICU in St. Louis, Missouri. He struggled to survive a catastrophic accident and, along the way, experienced a series of miracles.

John Smith, 14, and two friends had decided to skate around on the thin ice of Lake Sainte Louise in St. Charles, Missouri, just northwest of St. Louis. The day was warm because of an early thaw, and the boys wore shorts and tank tops. Although warned by the manager of the lake’s clubhouse to get off the ice, they didn’t, and the worst happened.

They suddenly fell through the thin ice. It was 11:33 a.m. One of the trio, Josh Sander, swam to shore. But John struggled as he tried to help the other skater, Josh Rieger, onto the ice. He yelled to Rieger’s sister, Jamie, on the shore, “Call 911! I don’t want to die!” Then he disappeared beneath the surface.

Local police and first responders were on the scene within minutes. The Wentzville fire truck arrived, and, using poles, firefighter Tommy Shine and another rescuer prodded the rocky bottom for the softness of a human body. Divers were already in the murky water looking for John. At 11:51 a.m., almost 20 minutes after John had fallen into the water, Shine found him.

He was not breathing. Although dirty lake water spewed out of his mouth and nose, he had no pulse and no heartbeat. The EMTs rushed the teen to St. Joseph’s Hospital West (now called SSM Health St. Joseph Hospital Lake St. Louis), just six minutes away.

Trauma doctor Kent Sutterer was sure that, after 43 minutes without breathing, John would not survive. As John’s mother, Joyce, sat anxiously in the waiting room, a tiny nun in her 60s, dressed in a gray and white habit, sat down and took her hand.

Ten minutes later, Joyce was allowed in the trauma room where John lay surrounded by medical personnel. All she could see of her son were his colorless feet as a doctor continued doing CPR. Joyce sat on a chair and the nun stood behind her and placed her hands on the worried mother’s shoulders. Dr. Sutterer squatted near Joyce and introduced himself. Then he told her she could go and talk to her son.

A doctor was still trying to pump air into John’s lungs. Tubes and wires snaked everywhere. Joyce grasped her son’s cold feet and quietly prayed. But later she learned that it came out as a roar that everyone, even down the hallway, could hear: “I believe in a God who can do miracles! Holy Spirit, I need you right now to come and breathe life back into my son!”

At that moment, John’s heart monitor began to beep.

When Joyce was only 17 years old she became pregnant and chose adoption for her son. She later married the father and had two more sons before the marriage ended in divorce. Sometime later she met Brian, who also had a son, and they married. Brian was a videographer who often traveled with their church group on mission trips to Central America. There, Brian became aware of many babies who needed adoptive parents. Even though he and Joyce were in their late 40s, they decided to adopt a baby from Guatemala.

John was a tiny 5-month-old baby who weighed only 10 pounds and had a turned-in foot. But they fell in love with him immediately and brought him home to Missouri. There, John … CLICK HERE TO CONTINUE READING  AT ST ANTHONY MESSENGER

April 5, 2019
'The Public' takes a stand in the Cincinnati library
Next Post

April 16, 2019 'The Curse of La Llorona' gives horror films a bad name
Recent Comments
0 | Leave a Comment
Browse Our Archives
get the latest from
Entertainment
Sign up for our newsletter
POPULAR AT PATHEOS Entertainment
1