The Hopeful Relevance of “The American President” 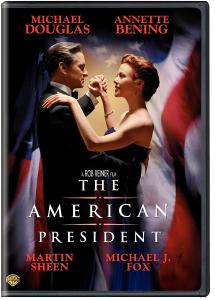 Every four years I start watching my favorite films about the U.S. president. These include All the President’s Men (1976), Lincoln (2012), the miniseries John Adams (2008) and my favorite The American President (1995.)

In “The  American President” Michael Douglas plays widowed Democratic President Andrew Shepherd and Martin Sheen is A. J. McInerny, his long-time friend and chief of staff. The film is writer Aaron Sorkin’s romantic-comedy take on the drama of a White House dealing with legislation on the environment and guns as Shepherd’s bid for re-election is ramping up. But the fun begins when lobbyist Sydney Allen Wade (Annette Benning) shows up at a White House meeting as a recent hire at an environmental organization. The president is immediately attracted to her and after agreeing to be his date at an official state dinner, Wade becomes known as “the president’s girlfriend.”

This “non-relationship” causes complications for Wade at the office and for the president and his campaign. Shepherd’s main rival, Republican Senator Bob Rumson (Richard Dreyfus) tells his team that they couldn’t go after Shepherd’s character in the previous election because he was a recent widower. A negative campaign would have garnered sympathy for Shepherd. But now, the election is about to become all about character. As Wade is attacked for being at a flag burning years before, for staying overnight at the White House, and implying that she slept with decision-makers to get their votes, Shepherd’s popularity starts to slip in the polls. Rumson goes after Shepherd’s character and ethics, calling for family values to be restored.

Things become more complicated when Shepherd promises to get Wade votes for the environmental lobby when they first meet but then backtracks in a political move to get senate votes for his anti-crime bill. This happens just before the State of the Union in January and causes a rift in their relationship. Though Shepherd insists that it is politics, Wade loses her job and takes a job for a politician in Connecticut.

Shepherd is no saint. He fails to listen to the wisdom of Lewis Rothschild (Michael J. Fox), his Assistant for Domestic Policy on the relationship between gun control and crime and fails again for being so cavalier about his political wrangling and Wade’s job. As Rumson’s attacks on his character heat up, Shepherd refuses to engage. But he realizes his mistakes and has the honesty to make good on them. In a spontaneous appearance at a White House press conference just before the State of the Union, Shepherd not only responds to Rumson and apologizes (in so many words) to Wade, but exalts the status of character in the role of the presidency and as citizens of the United States.

The film is not perfect. There is only one person of color in an influential position, Anna Deavere Smith as Robin McCall, the White House Press Secretary. This film today might have a very different cast so that anyone watching it would find themselves there. And what if Annette Bening had played a woman president and Douglas a political operative?

I watched this film a few times over the last year and I began to think that it doesn’t make sense anymore. The film is 25 years old and was the precursor to the incredibly popular television series “The West Wing” and the new HBO “The West Wing” voting special reuniting many of the series’ key actors to make a point about participating in our democracy.

But in the current political reality in the U.S., the argument that character matters has been moved off the table almost completely. I don’t think I have heard anyone mention family values as an important issue in four years (please note, that Jesus’ family values are the Beatitudes and Works of Mercy, not the issues of America’s culture wars.) None of the Sunday news shows talk explicitly about the connection between character and politics. You don’t see essays about character and the president or politics in the press (though books have been written.) Bob Rumson’s attacks would be laughable today because character simply doesn’t appear to matter in the cacophony of campaigning in 2020. If I were to recommend this film, many people would probably just laugh.

But then comes Shepherd’s speech at the end of the film and I sit up and pay attention as my dismay at the current situation diminishes and hope surges through me. This is the single most defining and hopeful speech in decades of what it means to be a U.S. president and a citizen of this country. Sorkin’s soaring rhetoric uplifts us because the American presidency is all about character, of doing the right thing even when no one is looking. The relevance of these words rings like the sound of a thousand liberty bells calling out to those who are open to hearing them, to discernment and wisdom – on election day.

Here is the written text of President Andrew Shepherd at the press briefing in “The American President.”

For the last couple of months, Senator Rumson has suggested that being President of this country was, to a certain extent, about character. And although I’ve not been willing to engage in his attacks on me, I have been here three years and three days, and I can tell you without hesitation: Being President of this country is entirely about character.

For the record, yes, I am a card-carrying member of the ACLU, but the more important question is “Why aren’t you, Bob?” Now this is an organization whose sole purpose is to defend the Bill of Rights, so it naturally begs the question, why would a senator, his party’s most powerful spokesman and a candidate for President, choose to reject upholding the constitution? Now if you can answer that question, folks, then you’re smarter than I am, because I didn’t understand it until a few hours ago.

America isn’t easy. America is advanced citizenship. You’ve gotta want it bad, ’cause it’s gonna put up a fight. It’s gonna say, “You want free speech? Let’s see you acknowledge a man whose words make your blood boil, who’s standing center stage and advocating at the top of his lungs that which you would spend a lifetime opposing at the top of yours.” You want to claim this land as the land of the free? Then the symbol of your country cannot just be a flag. The symbol also has to be one of its citizens exercising his right to burn that flag in protest. Now show me that, defend that, celebrate that in your classrooms.

Then you can stand up and sing about the land of the free.

I’ve known Bob Rumson for years. And I’ve been operating under the assumption that the reason Bob devotes so much time and energy to shouting at the rain was that he simply didn’t get it. Well, I was wrong. Bob’s problem isn’t that he doesn’t get it. Bob’s problem is that he can’t sell it!

We have serious problems to solve, and we need serious people to solve them. And whatever your particular problem is, I promise you Bob Rumson is not the least bit interested in solving it. He is interested in two things, and two things only: making you afraid of it, and telling you who’s to blame for it. That, ladies and gentlemen, is how you win elections. You gather a group of middle age, middle class, middle income voters who remember with longing an easier time, and you talk to them about family, and American values and character, and you wave an old photo of the President’s girlfriend and you scream about patriotism. You tell them she’s to blame for their lot in life. And you go on television and you call her a whore.

I’ve loved two women in my life. I lost one to cancer. And I lost the other ’cause I was so busy keeping my job, I forgot to do my job. Well, that ends right now.

Tomorrow morning the White House is sending a bill to Congress for its consideration. It’s White House Resolution 455, an energy bill requiring a twenty percent reduction of the emission of fossil fuels over the next ten years. It is by far the most aggressive stride ever taken in the fight to reverse the effects of global warming. The other piece of legislation is the crime bill. As of today, it no longer exists. I’m throwing it out. I’m throwing it out and writing a law that makes sense. You cannot address crime prevention without getting rid of assault weapons and hand guns. I consider them a threat to national security, and I will go door to door if I have to, but I’m gonna convince Americans that I’m right, and I’m gonna get the guns.

We’ve got serious problems, and we need serious people. And if you want to talk about character, Bob, you’d better come at me with more than a burning flag and a membership card. If you want to talk about character and American values, fine. Just tell me where and when, and I’ll show up. This a time for serious people, Bob, and your fifteen minutes are up….

November 13, 2020 "Jingle Jangle: A Christmas Journey" shines in the darkness
Recent Comments
0 | Leave a Comment
"When did this receive and Academy Award?"
Chrys Who Invented the “Jump Shot”? New ..."
"Character matters. Yeah? What then? Look what sort of character is running to grab power ..."
ounbbl The Hopeful Relevance of “The American ..."
"lol wut"
Bloodeagle 1917 is a relentless video game-like ..."
">To each their own I supposeSo you admit you wasted your time writing what you ..."
GoldRushApple Doubt the Movie
Browse Our Archives
Related posts from Sister Rose Movies