In modern war-torn Mosul, when ISIS begins to establish a new caliphate, the mother (Albane Courtois) of a young boy, Laith (Gabriel Cartade),  is killed by an ISIS fighter when he finds a bookmark in her apartment that reads, “Peace be upon you Lady Fatima.” He then tells the young boy to run.

An Iraqi soldier finds the boy in the chaos and offers to take him home to his grandmother. Laith is upset and has nightmares following his mother’s killing so the kindly grandmother soothes him by telling him the story of Fatima, the only daughter of the Prophet Mohammed.

The film turns back about 1400 years to the year 622 when Mohammed, the founder of Islam, flees Mecca for Medina with his father-on-law Abu Bakr, family members and some of his followers to escape persecution. Mohammad, the Prophet of God on earth, intends to create a new order to build a better future for the people, a future of peace. He proclaims that Jews and other non-Muslims are welcome to live in Medina. 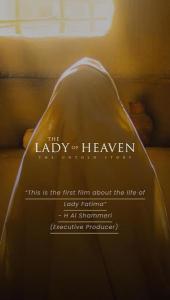 Fatima, the only biological daughter of Mohammad and his wife Khadijah (according to Shia Muslims; Sunni Muslims believe that the Mohammad had four biological daughters), is married to Ali Talib, Mohammad’s cousin. In the following years there are battles between tribes and there is a tense situation spawned by jealousy between a young woman and Fatima.

Supporters of Ali believe that any sons that Ali and Fatima will be the legitimate successors to Mohammad when he dies. In fact, they believe that this is what Mohammad wanted. But after the Prophet’s death in 632, some members of the Muslim community decided that Abu Bakr should assume the title of Caliph or leader instead of Ali and his descendants. Fatima dies not long after her father, and following a land dispute with claiph to her father’s role, Fatima directed that her burial place be hidden; it is still unknown.

The film suggests that Fatima was the dearly beloved daughter of Mohammed, modest, kind, and obedient but there are almost no specific examples dramatized. She is thought to have been intensely devoted to her father, Islam, her family, and community, especially after the death of Mohammad, according to some sources I read. In the many battles (some epic)  before and a after Mohammad’s death, Fatima is thought to have nursed the injured, but this is not shown in the film.

However, the film also suggests that she is more of an example of strength and hope to Shia Muslims in wars of religious conflict instigated and protracted by conflicts inflamed by terrorism in the years following Mohammed’s death and even now. To modern day Shia and Muslims who revere her, Fatima’s legacy seems to be one of persistence of faith and comfort in adversity in the face of terrorist threats. This explains why the ISIS soldier killed Laith’s mother, also named Fatima. ISIS follows the Sunni branch of Islam and would consider any Shia or Muslim that esteemed the lady Fatima to be an adversary and threat.

As a film, it is interesting to a non-Muslim because most may not know much about Islam. I liked the characters of the grandmother, and her grandson, very much. Gabriel Cartade as Laith performed very well. Because we are not allowed to see Fatima’s face, or those of significant characters, she remains a ghostly figure. There is no significant character development. All the actors, as I recall, have British accents, something normal for most Biblical or historical films based in the Middle East, Arabia or non-English-speaking countries. The story takes place in the Arabian desert in the 7th century, so robes and sandals make up the men’s costumes. The cinematography by Mike Brewster is beautiful.

War, intense, explicit violence, and terrorism are pervasive in the film, past and present, overwhelming an understanding of who Fatima was and what she means to Shia Muslims. I don’t think there are many original sources in print (in English at any rate) to go by; this story, such as it is, is possibly based on oral tradition. I think identifying Mohammad’s successor(s) as the source of the divisions and conficts today may be too simplistic. According to Khan’s article cited above, disagreements continue over historical facts that influence today’s reality.

“Lady of Heaven” is a rare film about Islam that may be its greatest achievement. It is more of an act of devotion from the Shia perspective than an historical drama that some may expect. The character of the grandmother and her grandson certainly reflects the virtues attributed to Fatima. Laith’s mother, beautiful and brave, is a martyr to her faith.

The film is directed by Eli King based on a script by Sheikh A-Habib. “Lady of Heaven” was screened for buyers (in view of international distribution) in Cannes this year, followed by a panel that discussed the “relevance of international storytelling in modern cinema.”

As is noted at the beginning and end of the film, “Following Islamic tradition, no individual represented a Holy Personality during the making of this film. The performances of the Holy Personalities were achieved through a unique synthesis of actors, in-camera effects, lighting, and visual effects.”

December 9, 2021
Will Smith welcomes us to earth in new Disney+ series
Next Post

December 13, 2021 Women Film Critics Circle Awards announced
Recent Comments
0 | Leave a Comment
"When did this receive and Academy Award?"
Chrys Who Invented the “Jump Shot”? New ..."
"Character matters. Yeah? What then? Look what sort of character is running to grab power ..."
ounbbl The Hopeful Relevance of “The American ..."
"lol wut"
Bloodeagle 1917 is a relentless video game-like ..."
">To each their own I supposeSo you admit you wasted your time writing what you ..."
GoldRushApple Doubt the Movie
Browse Our Archives
get the latest from
Entertainment
Sign up for our newsletter
POPULAR AT PATHEOS Entertainment
1

Entertainment
Will Smith welcomes us to earth in new...
Sister Rose Movies
TRENDING AT PATHEOS Entertainment