This is when I must beware

The 30-year mortgage rate is now 6.66%. This news arrives on D-Day +62 years — 6/6/06 — and thus will be greeted as portentous by those obsessed with seeking portents, such as the authors and fans of the Worst Books Ever Written.

It's hard to know what these folks would make of this news, actually, since the rapture-maniacs all claim that they expect the world to end long before a 30-year mortgage would ever come to term. 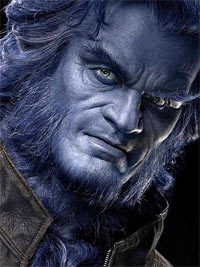 I could link to any one of dozens of 6/6/06 articles about the combination of hysteria and marketing greed surrounding the meaningless quirk of the calendar that causes some people to view today as beastly. They get that idea from Revelation 13:18 —

This calls for wisdom. If anyone has insight, let him calculate the number of the beast, for it is man's number. His number is 666

(Those most intent on the significance of the number at the end of that verse tend to be those least likely to pay attention to those four words at the beginning of it.)

Many of today's 6/6/06 articles cite the Rapture Index site, which currently calculates an index of 157. A Rapture Index of 110 to 145, the site says, indicates "Heavy prophetic activity." An index above 145, it says, means "Fasten your seat belts."

I suppose they mean "fasten your seat belts" as in "get ready for takeoff," but it still seems an odd choice of words (even apart from the way it makes one think of Bette Davis). Isn't the whole point of the rapture that these folks want to be lifted out of their seats? So why are they strapping themselves down?

Most of the 6/6/06 articles also note the strange trinity of marketing ploys attempting to take advantage of today's beastly date: the release of the unnecessary remake of The Omen; the release of The Rapture — the latest Left Behind prequel from our friends Tim and Jerry; and the publication of Godless, the latest screed from Mystery Babylon herself. (Sad, sadder, saddest.)

I like this 6/6/06 piece, from CBS/AP because it mixes an appropriate touch of whimsy with a broad array of representative quotes, and because it links to the Rev. Felix Just's Number of the Beast Web site.

Just offers a good bit more whimsy as well as some "more serious academic stuff" that provides a good overview of the significance of the number of the beast and the larger meaning of the rest of John's Apocalypse as understood by the great majority of Christians, living and dead (i.e., those of us who do not believe that Scofield's footnotes and Left Behind should be included in the canon as the 67th and 68th books of the Bible).

K. Connie King of the L.A. Times, likewise, offers some welcome theological context to help explain that Tim LaHaye is not the most reliable representative of What Most Christians Believe (while still including a fair summary of the PMD perspective from a Dallas seminary prof).

The BBC's Stephen Tomkins takes a different approach, sorting through the various reactions to today's date from the various competing factions of Satanists (who are apparently as schismatic as Baptists).

Dark rituals surrounding the nefarious date seem mainly to involve dinner and a movie. Vexen Crabtree, "Minister of the London Church of Satan," plans to go clubbing tonight, but you can tell he's disappointed that the date falls on a Tuesday. Still, he says, "Any excuse for a party is a good one" — which strikes me as not a bad bit of theologizing.

And speaking of theologizing, here's the gist of Just, a nice summary of why most Christians think that the portent-obsessed are misreading, and as the Rev. Just says, misusing, the Bible:

As a biblical scholar and Catholic priest, I think trying to predict the future is a misuse of the Bible. Biblical prophecy is not about crystal-ball gazing into the future. Rather, prophets of the Bible are those who speak on behalf of God, conveying God's messages to people, interpreting the past, present, and future through God's eyes, so to speak. Biblical prophets call people to repent and to remain faithful to God, not to worry about when the world will end or who is the "beast" of the Book of Revelation.

The inconvenient thing about this understanding of the prophets is that, unlike the complex hermeneutical schemes of the rapture-maniacs, it doesn't allow you to avoid what the prophets are actually saying. A skeptical person might even suspect that this convenient avoidance of the prophetic message is the primary purpose of that complex scheme.

76 responses to “This is when I must beware”