OK, apparently this is true. And this is big. Really big.

"I did not have a homosexual relationship with a man in Denver," Ted Haggard said with a calm specificity during an interview with a Denver TV reporter on Wednesday night as controversy broke around him. "I am steady with my wife. I'm faithful to my wife."

Nevertheless, the pastor of one of the most prominent mega-churches in the country — and one of President George W. Bush's advisors on evangelical issues — has taken a leave of absence from his own 14,000-member New Life Church and temporarily resigned as president of the 30-million-member National Association of Evangelicals, which represents more than 45,000 evangelical churches across the U.S., after Mike Jones, a gay massage therapist — and self described professional male escort in Denver — told local radio and TV stations that he sold Haggard gay sex for three years. Jones also said that Haggard used drugs with him. …

The National Association of Evangelicals is the primary mainstream organization for America's evangelical Christian community, representing tens of thousands of churches all over the country. Haggard and the NAE aren't as visibly political as the spotlight-seeking media moguls — Falwell, Robertson, Dobson, etc. — who get most of the attention as the leadership of the religious right. And the NAE isn't as blatantly political or viciously partisan as those groups tend to be. Haggard himself, and the NAE in general, tend to be more cautious, more pastoral, and a shade more nuanced. But the NAE is also a lot bigger and, in subtler ways, far more influential than it's more visible siblings in the religious right.

Here's how Haggard himself describes the group on what is, incredibly, still the front page of the NAE's Web site:

The NAE is composed of sixty member denominations representing 45,000 churches across America; our numbers generate influence and power, our diversity creates integrity and strength, and our unity produces effective value for the Body of Christ. Together we can accomplish more than we could ever achieve on our own.

He goes on to attempt to rally political support — something he does fairly often — against the "radical extremist … secular humanism" he sees as attacking the United States Air Force.

Haggard's political efforts to keep atheists away from airmen are less important than his other, more emphatic, political efforts, namely those in which he has been a prominent and aggressive opponent of same-sex marriage. The NAE's efforts in this regard have taken some pains to avoid demonizing homosexuals on a personal level, which I suppose is nice, but the upshot of their uncompromising stance is the same: gay people are enemies of The Family, paragons of the wickedness that is eroding our godly nation. And they're going to Hell. 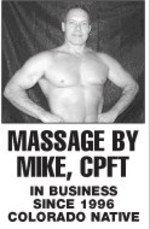 Haggard has waged this political battle against homosexuality while living a lie. That requires two, related responses. The first is on a political level. Haggard and his allies have been fighting a political fight — they have been trying to wield power to force others to comply with their wishes. And it's perfectly legitimate to respond to power with power — to take full political advantage of this political actor's hypocrisy and to press that advantage. Full court press. Haggard signed up for this by stepping forward to wield that power and he can't complain now when it's time to reap what he has sown.

But the second response — which I can't ignore — has to do with Ted Haggard the person who is, among other things, my "brother in Christ." There's a script for how this will play out in the evangelical community — a script written out on that very same NAE page cited above:

… homosexuality [is] a sin that, if persisted in, brings grave consequences in this life and excludes one from the Kingdom of God.

Individual Christians, ministers, and congregations should compassionately proclaim the Good News of forgiveness and encourage those involved in homo­sexual practices to cease those practices, accept forgiveness, and pray for deliverance as nothing is impossible with God. Further, we should accept them into fellowship upon confession of faith and repentance, as we would any other forgiven sinner.

All that language — forgiveness, deliverance, confession, repentance — really means here only that Haggard needs to go back to living a lie. If he agrees to live that lie, and with clenched teeth to continue proclaiming that others must join in living that lie, then Haggard will be "accepted" back "into fellowship."

For Christ's sake, enough with the lies. The last thing Haggard needs is to be "accepted" into a fellowship that cannot accept who he really is. Both he and that fellowship have just been given an opportunity to abandon lies. I'm praying that they will recognize that opportunity and take it.

I'll have more to say as the reactions to this scandal arise, but for now let me direct you to Jeff Sharlet of The Revealer, who is probably the most knowledgeable commenter on Haggard and the NAE. Sharlet's post, Haggard's Downfall includes the full text of his long Harper's article on Haggard and his church. It's an insightful portrait, although, as Sharlet says, he apparently missed the bigger story by removing some thoughts on "the role of sex in Ted's theology." Some of those thoughts are found in "Sex as a Weapon," a review essay in Nerve.

Santa in a Brothel.
I was hungry and you gave me something to eat, I was...
view all Progressive Christian blogs
What Are Your Thoughts?leave a comment