Why are those OWS protesters so upset?

Wall Streeter Joshua Brown (a “Reformed Broker“) offers one answer in a post candidly titled “This Is Why They Hate You and Want You to Die“:

You want to know why everyone in this country hates you and wants you dead, you big stupid [frakking] bank?

Let me clarify that “Hates You and Wants You to Die” refers to the bank itself and not to the flesh-and-blood humans who work for that bank. They’re bad people, but they’re still people and I don’t want them to die — I want them to become good people, or at least better people. I want them to repent, restore and be redeemed.

But Brown’s larger point — that the anger being directed at Wall Street is legitimate and reasonable, that it has reason and merit — is true.

Here are some more reasons, starting with this graph from Jared Bernstein, “a simple plot of real median income for families with kids, 1989-2010.” 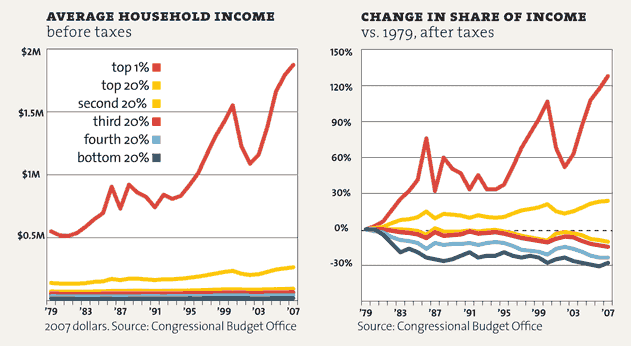 Some more reasons? OK, how about these?

“Bank of America to charge debit card use fee”

“Bank of America CEO Defends $5 Fee Hike: We Have ‘Right to Make a Profit’”

“Wells Fargo Forecloses on Home Because the Title Was Never Transferred”

And faced with all this, and with 14 millions of unemployed Americans in the fallout of a financial crisis created by the greed, corruption and incompetency of these same socialized millionaires, we also have been asked to put up with a Republican Party telling us that “we must make up our minds that for the future we shall permanently have millions of unemployed” that we must “accept as a necessary condition of our future a permanent army of unemployed.”

We have presidential candidate Herman Cain quoting Depression-Era strike-breaker William Boetcker as his inspiration, falsely claiming that it was Abraham Lincoln who said, “You don’t help the poor by hurting the rich.” And doing so while campaigning on a tax plan designed to help the rich by hurting everyone else.

We have Republican default-frontrunner Mitt Romney describing “middle-class” families as earning $200,000 a year — four times the median income — and suggesting that the best way to help them is cutting “any tax on interest, dividends or capital gains.”

We’ve watched politicians from both parties squander 18 months ignoring the jobs crisis while obsessing over its side-effect of budget deficits. We’ve heard politicians from both parties bloviating about fiscal austerity as some kind of moral virtue, as though there were anything virtuous about perversely denying a century’s worth of hard-learned economic truths. As though denying the truth were ever virtuous. And in the name of this vicious “virtue,” they’ve promoted budget austerity — pretending that austerity could ever beget anything other than more austerity.

To those who say that our expenditures for Public Works and other means for recovery are a waste that we cannot afford, I answer that no country, however rich, can afford the waste of its human resources. Demoralization caused by vast unemployment is our greatest extravagance. Morally, it is the greatest menace to our social order. Some people try to tell me that we must make up our minds that for the future we shall permanently have millions of unemployed just as other countries have had them for over a decade. What may be necessary for those countries is not my responsibility to determine. But as for this country, I stand or fall by my refusal to accept as a necessary condition of our future a permanent army of unemployed. On the contrary, we must make it a national principle that we will not tolerate a large army of unemployed and that we will arrange our national economy to end our present unemployment as soon as we can and then to take wise measures against its return.

Economist Martin Wolf also denounces the waste of human capacity of our jobs crisis and our refusal to address it more vigorously:

The waste is more than unnecessary; it is cruel. Sadists seem to revel in that cruelty. Sane people should reject it. It is wrong, intellectually and morally.

Wrong intellectually. Wrong morally. This is why those protesters are so upset. Me too.

OK, that was a bit heated, so let’s end with a joke passed along by Steve Benen:

A public union employee, a Tea Party guy, and a bank CEO are sitting at a table with a plate of a dozen cookies. The CEO takes 11 of the cookies, turns to the Tea Partier and says, “Watch out for that union guy; he wants your cookie.”

October 15, 2011
God is not registered to vote in New Hampshire
Next Post

A Preferential Option for the Vulnerable and the...
There are two types of justice work. One seeks to give people...
view all Progressive Christian blogs
What Are Your Thoughts?leave a comment
Copyright 2008-2020, Patheos. All rights reserved.