Richard Land, Bocephus and the Scandal of Evangelical Ethics

Hank Williams Jr. lost his job with ESPN recently after saying on a talk show that President Barack Obama and Vice President Joe Biden are “the enemy” and comparing them to “Hitler.”

Williams, sometimes known as “Bocephus,” had a long-time gig singing before the Monday night NFL game every week. That gig is now over because the sports network reasonably decided that allowing an inflammatory idiot to Godwin the pregame show wasn’t the best way to get a national TV audience ready for some football. Ratings have not suffered from his dismissal. 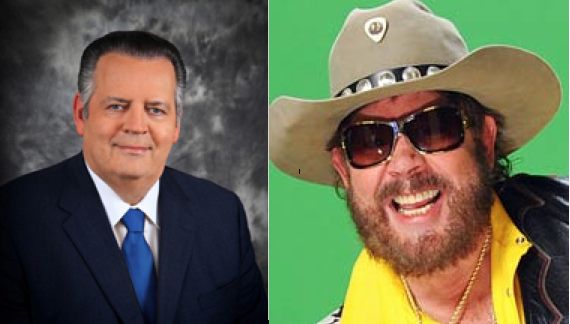 ESPN did what any responsible business would do. They did what every responsible organization does when confronted with a public employee saying the sorts of things that Williams said. Comments like Williams’ would get any employee fired or suspended or at least disciplined almost anywhere.

We should note that Bocephus’ role in the Monday night broadcasts did not require him to be an ethical or spiritual role model. He was there to warm up the audience with his catch phrase and his redneck charm (and because we all still love his dad’s songs). Williams was never hired to lead the NFL’s “ethics commission.” He was just an entertainer — but even an entertainer is required to meet minimal standards of decency and honesty. When he failed to meet even those minimal standards, Bocephus lost his job.

Whatever minimal ethical standards the Southern Baptist Convention has, they are far below those of Monday Night Football. Richard Land — who has served for more than 20 years as the president of the SBC’s Ethics and Religious Liberty Commission — has a long track record of saying things even more outrageously inflammatory and maliciously dishonest than what Hank Williams Jr. said. And yet his standing is undiminished as the convention’s chief spokesman for “ethics.” Bocephus was fired and has made himself a pariah in the sports community. Richard Land still has his job, has not credibly apologized, has not been disciplined, and remains a respected expert on ethics in the SBC and in the broader evangelical community.

That’s astonishing. Richard Land’s job is to teach and promote ethics on behalf of the largest Protestant denomination in the United States, yet his ethical violations as a public speaker exceed those of a bumpkin entertainer fired by ESPN. The ad hoc, informal community of football fandom apparently has higher ethical standards than the ad hoc, informal community of American evangelicalism.

This suggests that anyone who hopes to become an ethical person would be better off watching football on television every Monday night than attending worship at a Southern Baptist church every Sunday morning. Monday Night Football might not make you a better person, but the Southern Baptist Convention has long employed an “ethics” spokesman who seems determined to make you a worse one.

Neither Williams’ dismissal nor Land’s continued employment is controversial in the respective communities of sports broadcasting and evangelicalism. ESPN’s decision to part ways with Bocephus was widely viewed by football fans as sadly necessary and proper. His own vile words left them with no other responsible choice. Land’s ongoing role with the SBC, despite his vile words, has never been seriously questioned within the SBC hierarchy. His claims that gays prey on children and his calling a respected Jewish scholar “Mengele” has never stirred any hint of controversy among those who hold power in the SBC.

The example of Richard Land’s undiminished standing as a respected evangelical ethical expert might lead one to suspect that there is nothing one could say or do that might put one’s job in jeopardy in the evangelical world. But as we’ve seen in a series of recent examples discussed here, that’s not the case. Calvin College professor John Schneider was pushed into “early retirement” for questioning the idea of a “historical” Adam and Eve. Activists and media figures have encouraged Grove City College to rethink its employment of psychology professor Warren Throckmorton due to his refusal to deny the science disproving their belief in religious “reparative therapy” for gays. The same cast of characters has questioned Eastern Nazarene College’s continued support for Karl Giberson, a physicist who teaches actual physics, and Randall J. Stephens, a historian who teaches actual history. Their so-called “offense” was, again, arguing that Christians should stick to the facts. The activists and self-proclaimed bishops upset with all of these professors urge wealthy conservative donors to all of those colleges to pressure the schools to silence or remove such unacceptably truthful professors.

Consider this pattern. Speaking the truth is “controversial” and can get you in a lot of trouble. Outrageous lies, on the other hand, do nothing to diminish your job security or your standing as a respected expert on ethics.

In the American evangelical community, no shame or scandal or disapproval comes from bearing false witness against one’s neighbor — provided one targets the right neighbors. Such outright lies do not create controversy, but a refusal to lie is seen as making waves. Refusing to bear false witness against certain neighbors can put your job in jeopardy.

How did evangelicalism reach this point? How did it come to be that bearing false witness against certain of our neighbors isn’t just tolerated, but required?

The answer, I think, is that for all the talk of Jesus’ “sacrificial atonement,” evangelicals do not rely on Christ for their justification or vindication. They seek that justification elsewhere — from the sacrifice of scapegoats. Foremost among those scapegoats are GLBT people and women who have abortions.

The vilification of these scapegoats is of paramount importance in evangelicalism. It is more important than any belief in vindication through Christ. And this new core doctrine reshapes evangelical ethics to such an extent that bearing false witness against those scapegoats is mandatory.

That’s not a good place to be.