‘Broken Words’ and the freedom to ask questions

I recently listed Jonathan Dudley’s Broken Words: The Abuse of Science and Faith in American Politics along with other spiritual memoirs by younger writers challenging aspects of what they have been taught in the American evangelical subculture.

“Memoir” isn’t really the right word for Dudley’s book, which is more impersonal and analytical than that implies. He steps back to examine ideas and ideologies rather than focusing on the particulars of his own story or journey. 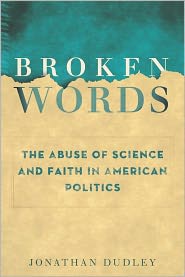 But that’s what this journey was like for many of us. It was a matter of ideas — ideas at first accepted, then examined, then found wanting. Books like Rachel Held Evans’ Evolving in Monkey Town, Alisa Harris’ Raised Right or Donald Miller’s Blue Like Jazz deal with many of these same ideas, but those writers approach the subject as writers — as skilled memoirists who plumb the particulars of their own experience. Dudley, instead, approaches these ideas like a prosecutor — placing each in the dock and examining the evidence to build his case against each in turn. Where the others present their testimonies — to use a word employed both in court and in evangelical churches — Dudley presents an argument. It’s a sustained and compelling argument.

And that argument is also, in a sense, his testimony. When he lays out the inconsistencies, contradictions and factual errors of these ideas, Dudley is also describing his own story. And, as with those other memoirs, it’s not only his story. It’s a familiar account for many of us who were raised in the American evangelical subculture and received there both a spiritual heritage we treasure and a set of unsustainable ideologies we are no longer able to embrace.

Where the memoirists approach this subject as storytellers, Dudley is more clinical and methodical. He enumerates his objections, summarizing the thesis he aims to defend in the very first paragraph:

I learned a few things growing up as an evangelical Christian: that abortion is murder; homosexuality, sin; evolution, nonsense; and environmentalism, a farce. I learned to accept these ideas — the “big four” — as part of the package deal of Christianity. In some circles, I learned that my eternal salvation hinged on it. Those who denied them were outsiders, liberals, and legitimate targets for evangelism. If they didn’t change their minds after being “witnessed to,” they became legitimate targets for hell.

Dudley then systematically works his way through that list — the “big four” — examining each idea separately while also showing how they relate to each other, diagnosing the common threads and shared misconceptions that underlie all of them.

That approach is more impersonal than a memoir, but also more precise. But then, for some of us, such clinical precision is personal — at least for those of us who tend to live a bit too much in our heads.

Dudley’s approach brings a clarity and specificity to this broader trend of millennial-generation evangelicals challenging and questioning the political and ideological orthodoxies they were taught were inseparable from faith in Jesus Christ. That specificity is bound to get Dudley in more hot water — to ensure his book is denounced with more clarity and specificity than those more personal, idiosyncratic memoirs have been. Where those other books make older evangelicals uncomfortable by asking taboo questions, Dudley trespasses further by offering taboo answers. He doesn’t just say that it’s wrong to make the big four central, defining and inviolable tenets of faith, he also says that the older generation is wrong about the big four — wrong to oppose legal abortion, wrong to oppose civil rights for GLBT people, wrong to oppose evolution, wrong to oppose environmentalism.

Dudley’s discussion of each of those subjects deserves a closer look, and I want to return to his book in future posts examining all of those points.

Here, I just want to note that his contention — that evangelicals have been wrong about the big four — is not permitted within the sphere of conversation controlled by the older generation of evangelicals. These things simply may not be debated or questioned. Just look at the knee-jerk uniformity of response to Karl Giberson’s recent articles on evangelical anti-intellectualism. Or look at what happened to Rich Cizik.

Figures like Mark Noll, Jim Wallis or Tony Campolo are branded as dangerously “controversial” for occasionally kinda sorta nibbling around the edges of the big four — suggesting that perhaps, maybe, there might be a teensy bit of wiggle room to allow for a very slightly broader approach to these topics. But even that negligible deviation from the sacrosanct official stance carries a cost. And to go further would be to risk getting Cizik-ed — losing your job, your church, your chance of ever again being employed by any evangelical agency that relies on the current generation of donors (a wealthy, very conservative constituency determined to cut off any dissident who questions the big four). There’s a reason Mark Noll is now teaching at Notre Dame.

I believe there is a real generational shift taking place in American evangelicalism. Particularly when it comes to GLBT issues, millennials consistently reject the misleading claims of the older generation. But I think this recent wave of dissident books by younger writers reflects more than just that.

I think it also reflects something Brian McLaren (another one of those dangerously “controversial” people) mentioned recently in response to a question about the no-dissent-allowed subject of abortion:

Relatively few people are in a position to talk about abortion as a theological and biblical question without having to worry about the consequences, meaning where their views would locate them in political, social, and even economic struggles. 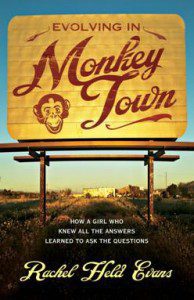 Younger writers don’t have to worry about those consequences. The evangelical establishment can’t threaten their privileges because they don’t have any privileges in that establishment. They don’t need to worry about an unflattering article in Christianity Today causing their speaking-fees to dry up because they’re not depending on any such speaking fees. They don’t have to worry about possibly offending the sensibilities of Howard Ahmanson and thereby losing their grant money because they’re not supported by such grants (and, happily for them, they may never even have heard of Howard Ahmanson).

Fear of punitive, retaliatory “consequences” prevents older evangelicals from speaking up and speaking out the way these younger writers do. More than that, it prevents them from even entertaining the thoughts that might lead them to having something to speak up and speak out about.

The same inconsistencies, contradictions and factual errors that trouble Jonathan Dudley are noticed — or at least glimpsed — by leaders of the older generation of the evangelical establishment. But they don’t even allow themselves the chance to give them a second thought because the consequences of that line of thought are all too clear.

Rachel Held Evans and Alisa Harris are both thoughtful and perceptive people, but the troubling doubts they wrote about so well aren’t unique to them. The same doubts and reservations have occurred to scores of older evangelicals too, but that older generation had too much at stake to allow themselves to think through the implications of those doubts as thoughtfully as those younger writers have.

I’m not intending this as a criticism or judgement against that older generation. They are well and truly trapped. I won’t accuse them of timidity because their options really are constrained. 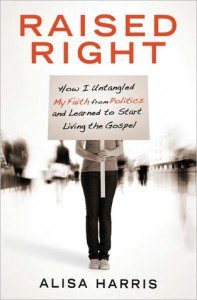 Tony Jones discusses the implications of this bind as it relates to evangelical scholarship — even in an area like New Testament studies (see “Honest Scholarship May Not Be Possible at a Christian School“). But it also has real-world, tangibly hurtful implications for many involved in direct ministry.

But let’s say you run an evangelical ministry helping at-risk kids in urban areas. You’ve never addressed any of the big four issues — never even been anywhere near them. After a couple of decades of hard work you’ve built a network of after-school tutoring programs, health clinics, food pantries, youth groups, mentoring networks — the full-court press. And it’s all dependent on the support of evangelical churches. That support is, in turn, contingent on the imprimatur of an ever-shifting list of “gatekeepers,” those self-appointed bishops — authors, radio hosts, columnists, activists, mega-church pastors, etc. — who define the boundaries of acceptable evangelical ideology.

You can quantify all the good things your ministry is doing, but it’s not about the numbers for you. You know these kids and their families. You love them. They have names and faces and they depend on you.

And then one day some interviewer asks you about one of the big four issues while preparing a puff piece for Charisma magazine. Or you’re asked to sign the latest of the endless stream of “declarations” that always seem to be circulating among evangelicals (declarations that often seem to exist specifically in order to keep everyone in line on the big four). And whatever you say will have a direct and measurable impact on all those kids and their families.

That’s the trap. Zugzwang — every move is a bad one.

And all I’m willing to say with confidence about the moral calculus involved is that I’m grateful I’m not in such a trap myself.

But I’m also grateful — very grateful — that this wave of younger writers isn’t caught in that trap either. And I’m grateful that they are therefore able to write with an honesty and candor I’ve learned I cannot expect from an older generation of American evangelicals.