Is Billy Graham being exploited for political gain?

Both Alvin McEwen and Jan Edmiston wonder if the Rev. Billy Graham is being exploited and manipulated.

The iconic evangelist, who is now 93 years old and has been in poor health, has a long history of avoiding taking sides on partisan political disputes, fearing that doing so would distract from his primary concern of preaching revival. He’s always been a very conservative man, politically and culturally, but he’s also usually previously avoided taking sides publicly on matters that were to be decided in the voting booth. 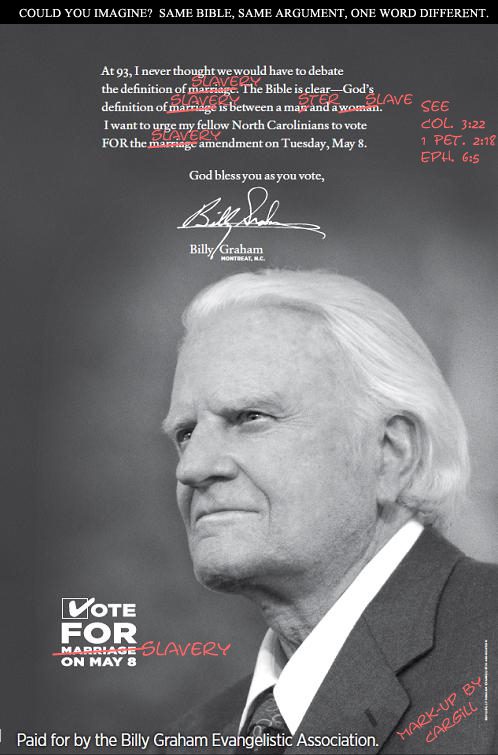 There’s always been a salesmanlike element to Graham’s approach — a mass-marketing ingredient to mass-evangelism. And thus Graham has tended, like many major corporations, to take care not to offend any part of his potential audience.

As Edmiston notes in her “Open Love Letter to My N.C. Kin,” the nasty scapegoating of the recent media blitz in Graham’s name doesn’t match the tone of his earlier statements about GLBT people:

I see that Billy Graham has asked people to vote FOR Amendment 1 and I have enormous respect for this man. But I also know, from Montreat friends, how frail he is and I wonder if he really made that statement or if someone made it for him. The photograph is clearly from his younger, healthier days and the truth is that Amendment One is not about the definition of marriage. Again, N.C. has already defined it.

At a San Francisco Crusade in 1997 Billy Graham stated: “There are other sins. Why do we jump on that sin [homosexuality] as though it’s the greatest sin? … What I want to preach about in San Francisco is the love of God. People need to know that God loves them no matter what their ethnic background or sexual orientation. I have so many gay friends, and we remain friends.”

Alvin McEwen of Holy Bullies and Headless Monsters regularly blogs about “the inaccuracies lodged against the LGBT community by religious conservative organizations.” He’s been covering that beat — the homophobic religious right — long enough that he also sees Graham’s aggressive endorsement of Amendment One as out of character for the old evangelist:

I mean no disrespect to Rev. Graham, but it disappoints me that he is lending his name  and reputation to this deceptive campaign. His statement is deliberately simplistic and ignores several issues, including the fact that Amendment One is not a Biblical issue and that marriage equality is already outlawed in North Carolina.

However, I would prefer to give him the benefit of the doubt. I personally don’t believe that he would endorse Amendment One if he was educated on the realities of what would happen should it pass.

Legal experts across the state, even those who are conservative, have spoken out against Amendment One, calling it extreme because it “threatens a range of other protections for unmarried partners and their children, including domestic violence protections and child custody law.”

… I know in my heart that this is not the future [Graham] intends for North Carolina.

I mentioned the other day that Graham’s ad blitz in support of Amendment One seemed more like the work of his no-good political-hack son Franklin than like the sort of thing Graham would ever have initiated on his own. And perhaps the rumors that Edmiston hears from Graham’s estate in Montreat are correct and Graham himself seems too frail and ailing to have conceived or executed such a raw political power play on his own.

And while I agree with Edmiston and McEwen, that this ugly campaign does seem out of character for the elder Graham, the idea that the younger Graham might be manipulating his father, corrupting his legacy to further his own mean political agenda … well, that would be perfectly in character for Franklin Graham.

Like McEwen, I’m deeply disappointed by the apparent change in Billy Graham’s attitude and approach seen in his mean-spirited politicking for Amendment One. But if it turns out that Billy isn’t really responsible for this campaign — that his age and frailty are being exploited by his would-be power-broker son, then I wouldn’t by disappointed in Franklin Graham. I’ve been watching Franklin Graham long enough that he is no longer capable of disappointing me. This sort of garbage is exactly what I’ve come to expect from him.

May 7, 2012
Three commentaries on N.C. that are far more moral than Billy Graham's cruel embrace of ignorance
Next Post

May 8, 2012 Hotfoot powder all around my door
Recent Comments
9 Comments | Leave a Comment
Browse Our Archives
Related posts from slacktivist